The Need Of The Hour Is the Indianisation of Our Legal System: Chief Justice NV Ramana 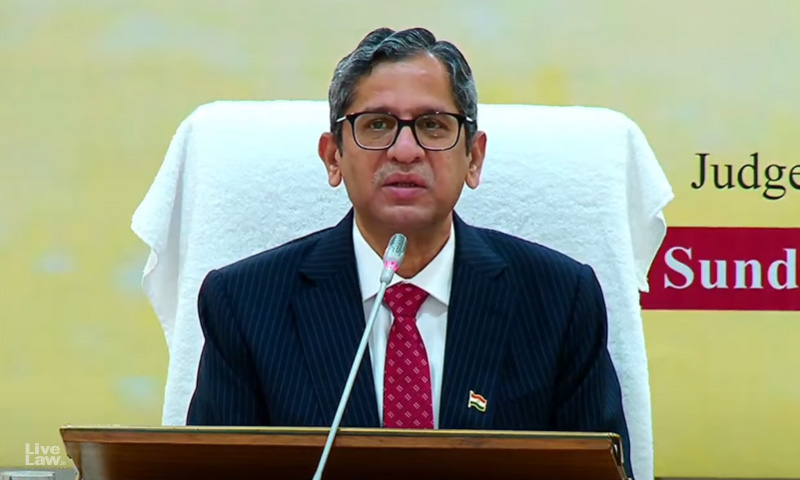 Speaking about the Indian judicial system, CJ N. V. Ramana on Saturday acknowledged that very often our justice delivery poses multiple barriers for the common people, that the working and the style of Courts do not sit well with the complexities of India, and that our system, practices, rules being colonial in origin may not be best suited to the needs of Indian population. The CJ was...

Speaking about the Indian judicial system, CJ N. V. Ramana on Saturday acknowledged that very often our justice delivery poses multiple barriers for the common people, that the working and the style of Courts do not sit well with the complexities of India, and that our system, practices, rules being colonial in origin may not be best suited to the needs of Indian population.

The CJ was speaking at an event organised by the Karnataka State Bar Council to pay tributes to Late Mr. Justice Mohan M Shantanagoudar.

The CJ asserted that the need of the hour is the Indianisation of our legal system. "When I say Indianisation, I mean the need to adapt to the practical realities of our society and localise our justice delivery systems", he explained.

CJ Ramana cited as an example the plight of parties from a rural place fighting a family dispute who are usually made to feel out of place in the Court. They do not understand the arguments or pleadings which are mostly in English, a language alien to them. These days judgments have become lengthy, which further complicates the position of litigants. For the parties to understand the implications of a judgment, they are forced to spend more money.

"Courts need to be litigant centric, as they are the ultimate beneficiaries. The simplification of justice delivery should be our pressing concern. It is crucial to make justice delivery more transparent, accessible and effective. Procedural barriers often undermine access to justice. The common man should not be apprehensive about approaching the courts and authorities. While approaching the Court, he should not feel scared of the Judges and Courts. He should be able to speak the truth", urged the judge.

He continued to state that it is the duty of lawyers and judges to create an environment which is comforting for the litigants and other stakeholders, and that we must not forget that the focal point of any justice delivery system is "the litigant- the justice seeker".

"In this light, usage of alternate dispute mechanism such as mediation and conciliation would go a long way in reducing the friction between parties and would save resources. This also reduces the pendency and requirement for having lengthy arguments with lengthy judgments. As Justice Warren Burger, the former Chief Justice of the United States stated, I quote- 'The notion that ordinary people want black robed judges, well-dressed lawyers in fine courtrooms as settings to resolve their disputes is incorrect. People with problems, like people with pains, want relief and they want it as quickly and inexpensively as possible'", reflected the CJ

CJ Ramana spoke of how Justice Shantanagoundar's contribution to the jurisprudence of the nation, from the time of his elevation to the High Court and particularly during his time in the Supreme Court, is indisputable. His judgments provide a deep insight into his years of experience, his depth of knowledge and his unending wisdom.

"But more than anything, his judgments showed simplicity, abundant common sense, and a practical approach. His tenure as a Judge was marked by his concern for social equality, opportunity to all, and rights and liberties of the people", said the judge.

The CJ hailed how in the Nandan Biomatrix case, Justice Shantanagoudar held that farmers were also consumers and could seek compensation under the Consumer Protection laws. In the Amitabha Dasgupta case, he passed strictures on Banks for imposing unfair conditions on consumers- "He was known for his fearlessness and independence". The CJ commended that his dissent in the Indore Development Authority case is well known. "He never minced words, but at the same time, he was never rude", remarked the CJ.

"Sitting on a Bench with him for about a year and a half, I was witness to his legal acumen, immense preparation as well as his kindness and generosity of spirit. We grew extremely close over that period, and there were many days that we shared our views over breakfast. While sitting together, we decided several important cases, including on the mental health of convicts sentenced to the death penalty"

The CJ then reminisced about "one heart touching incident"- "One day, while retiring to chambers, a gemstone of my ring had fallen off. That particular ring had a lot of divine significance as it was blessed by Satya Sai Baba. When Brother got to know that I had lost the stone, he himself took off to search for the same in the entire Supreme Court corridor and found the stone after half an hour of intense search. It speaks of his immense humility"

The CJ narrated that it was well known that Justice Shantanagoudar encouraged young lawyers who were always welcome at his house to seek his guidance- "Further, I was made aware of certain heartfelt articles written by his research assistants after his untimely demise, which is a testament for his warmth and his caring nature"

Speaking of Justice Shantanagoudar's commitment to his work, the CJ relayed how over the last year, when his health took a turn for the worse, how weak he grew, how he was struggling with certain medical conditions. "However, he never showed it. This was because of his immense grace and strength of character. He was built from a different fibre. Till his last days, he continued to sit on the bench, hear cases and write judgments. His commitment to his judicial duty was inspiring", said the CJ.

Finally, CJ Ramana told that the one thing which stood out about Justice Shantanagoudar was his sense of humour and his infectious laughter. "In Court, when tempers could run high, he would magically make all the tension disappear with a ready pun. As the American poet Langston Hughes once said, quote- "Like a welcome summer rain, humour may suddenly cleanse and cool the earth, the air and you"", recalled the CJI.