'Arbitrary' : Supreme Court Directs AIIMS To Postpone INI CET 2021 For One Month Due To COVID 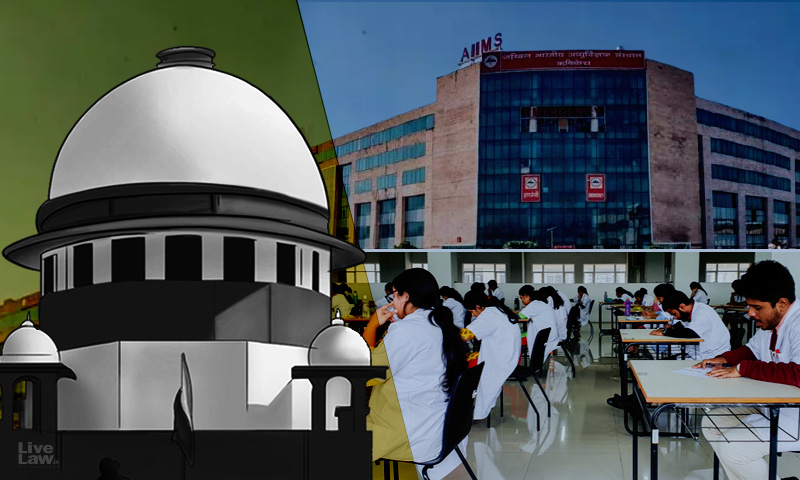 The Supreme Court on Friday directed the All India Institute of Medical Sciences(AIIMS) to postpone the INI CET 2021 exam - which was scheduled on June 16 - by at least a month in view of the COVID-19 situation.

"Considering that the candidates have been rendering Covid duties far away from Centres chosen and inadequate time for preparation, we are of view that fixation of date on June 16th is arbitrary. We direct AIIMS to postpone exam by atleast one month. Needless to mention that authorities of AIIMS would give an appropriate date from one month from 16th June", the Court directed.

A vacation bench comprising Justice Indira Banerjee and Justice MR Shah was hearing petitions challenging the conduct of the National Importance Combined Entrance Test (INI CET) examination on 16th June 2021 and seeking directions to postpone the exam being conducted for admission to postgraduate courses in leading Government Medical Institutes in the Country including AIIMS, JIPMER and NIMHANS.

The bench heard two petitions - one filed by a group of 23 MBBS doctors and another filed by Indian Medical Association, Medical Student Network (Chhattisgarh Chapter) along with 35 serving doctors currently serving in Covid duties(Poulumi Mandal and others vs Union of India, Indian Medical Association, Medical Student Network (Chhatisgarh Chapter) vs AIIMS and others)

The petitioners sought quashing of Notice dated 27th May 2021 issued by AIIMS, that notified that the INI CET.

Senior Advocate Arvind Datar, appearing for the IMA Medical Student Network(CG), submitted that it was a matter affecting right to life and right to vocation of the doctors. Mr.Datar told the bench about the appeal made by the Prime Minister to MBBS doctors to join COVID-duties and the assurance made by him to postpone the NEET exam. The NEET exams scheduled in May were postponed to August too. If that be the case, why can't INI CET be also postponed, Mr.Datar asked.

"We have signed bonds with the state government and we can't leave without notice. CA, NCLAT etc are all canceled or postponed. My suggestion is that it may be conducted with NEET PG, as most students write both exams", Mr.Datar argued.

Datar: We have signed bonds with the state government and we can't leave without notice. CA, NCLAT etc are all canceled or postponed. My suggestion is that it may be conducted with NEET PG, as most students write both exams. #SupremeCourt #INICET

"Why this examination when NEET is postponed", Justice Shah asked the counsel of AIIMS.

"At least give them one month notice", Justice Banerjee suggested.

The counsel of AIIMS, Mr.Dushyant Parashar, told the bench that the prospectus was issued in March and the candidates were well aware of the exams. If the exams are stayed, there will be a scarcity of doctors, the AIIMS counsel argued.

The AIIMS counsel also informed the bench that INI CET is held twice in an year and if the petitioners have any difficulty in attending the June exams, they can appear for the next exams scheduled in October-November.

The AIIMS counsel further informed that arrangements for exams are ready in across 32 states. He further said that the COVID situation has improved in many parts of the country.

However the bench insisted that the exams should be deferred at least by a month's time. Although the AIIMS's counsel sought time till Monday to get instructions, the bench refused, saying it was too close to the date of the exams. The bench wanted the counsel to get back with instructions today itself, and passed over the matter to 12.30 PM.

When the matter was taken at 12.30 PM again, the AIIMS counsel tried to persuade the bench by pointing out that the Supreme Court had refused to defer the NEET exams last year by saying "life must go on".

But the bench was not impressed with this submission.

"After that the circumstances have changed. Now we have a second wave of the pandemic", Justice Shah said.

The petitioners argued that the AIIMS has failed to take into account that many students are currently posted in Covid duties and writing an examination will require them to leave the duty and travelling for doctors posted in rural areas will be a cumbersome process.

The petitioners further argued that the impugned Notice is not only arbitrary but has also been issued as an afterthought in complete disregard to the life, safety and health of the students. They stated that the conduct of exam goes against the spirit of the Prime Minister's statement issued while postponing NEET.

The petitioners stated that the decision to conduct exam has been conveyed merely 18 days in advance and therefore, there is hardly anytime left with them to prepare for the examination.

The petitioners argued that abrupt announcement of the schedule of the INI CET examination has put them under excessive mental pressure and conducting exam at this stage would severely affect not only the examinees but also other Doctors, and their family members.

The INI CET is the exam for admission to postgraduate courses in leading government medical institutes in the country including AIIMS, Jawaharlal Institute of Postgraduate Medical Education and Research (JIPMER) Puducherry, and National Institute of Mental Health and Neuro-Sciences (NIMHANS) in Bengaluru.

The INI-CET regulates admission to around 800 seats for which more than 80,000 candidates appear.