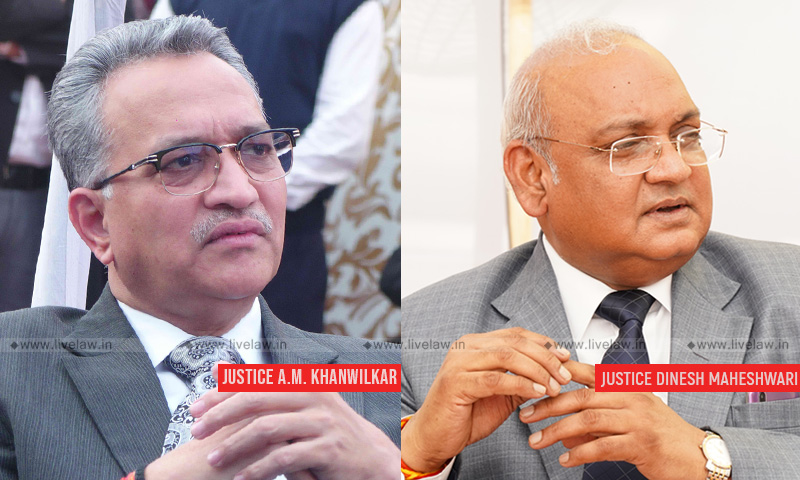 The Supreme Court upheld the constitutional validity of the Rajasthan Schools (Regulation of Fee) Act, 2016.

The bench comprising Justices AM Khanwilkar and Dinesh Maheshwari however read down Sections 4, 7 and 10 of the Act.

"The dispensation envisaged under Section 6 of the impugned Act of 2016 is not intended to undermine the autonomy of the school Management in the matter of determination of fee structure itself. What it envisages is that the school Management may determine its own fee structure, but may finalise or give effect to the same after interacting with the SLFC", the Court said.

In the appeals filed before the Apex Court, the private unaided schools in the State of Rajasthan had assailed the validity of the Rajasthan Schools (Regulation of Fee) Act, 20163 , in particular Sections 3, 4, 6 to 11, 15 and 16 and the Rules framed thereunder titled Rajasthan Schools (Regulation of Fee) Rules, 2017 , in particular Rules 3, 4, 6 to 8 and 11 thereof being ultra vires the Constitution and abridge the fundamental right guaranteed under Article 19(1)(g) of the Constitution of India. The Rajasthan High Court had earlier upheld the vires of the Act.

According to the managements, these provisions limit the autonomy of the school Management of private unaided schools to the level of merely proposing the school fees to the School Level Fee Committee, in which the Management has only one representative as against eight others i.e., five parents, three teachers and one principal. They contended that the State can only regulate the fees determined by the private unaided schools only if it shows that the same entails in profiteering or capitation, which is prohibited by law.

Referring to the constitution bench judgments in this regard including TMA Pai Foundation case and P.A. Inamdar case, the court observed that Government has power to provide for external regulatory mechanism for determination of school fees or so to say fixation of "just" and "permissible" school fees at the initial stage itself.

Regarding Section 4, the contention raised was that for choosing the willing parent to become member of the SLFC by draw of lots, no eligibility criteria has been prescribed in the Act of 2016 or the Rules of 2017. Besides, willing parent of the ward, who is admitted in the school against the 25 per cent quota of free education under the RTE Act, may also fit into this category even though he would have no stakes in the fee structure proposed by the school Management.

"The argument seems to be attractive, but for that reason the provision need not be struck down or declared as violative of any constitutional right of management of the school. This provision can be read down to mean that the draw of lots would be in respect of willing parents whose wards have been admitted against the seats other than the seats reserved for free education under the RTE Act. Further, for ensuring that the willing 31 parent must be well­informed and capable of (meaningful) interacting in the discourse on the proposal of fee structure presented by the school Management, he/she must have some minimum educational qualification and also familiar with the development of school, management of finances and dynamics of quality education. The desirability of such eligibility of the willing parent ought to be specified.", the court said while reading down Section 4.

Addressing the concerns about Section 7 and 8 of the Act, the bench observed thus in Para 37 and 38 of the Judgment:

From the bare perusal of Section 7(1), it is noticed that first five members are official members. It is a broad­based independent Committee which includes two representatives of private schools in the divisional area "nominated by the Divisional Commissioner" and similarly two representatives of parents "nominated by the Divisional Commissioner". The representation is given to the concerned stakeholders in the matter of determination of fee structure and in particular in the matter of enquiry into the factum whether fee structure proposed by the concerned school Management entails in profiteering or otherwise. In reference to Section 7(2)(a), we must observe that the term of office of representatives of the private schools and, in particular parents has been earmarked as two years from the date of their nomination. This would mean, necessarily, that the concerned parent would be eligible until his/her ward continues in the school during the tenure and is not a member of the SLFC of any school within the divisional area. Any member not fulfilling this criterion would be deemed to have vacated his office forthwith and, in his place, a new member can be nominated by the competent authority from amongst the parents of the wards pursuing studies in the school in 40 the concerned divisional area. Moreover, while nominating representative of parents, the Divisional Commissioner must keep in mind that the person so nominated must possess basic qualification of accounting, development of a school and dynamics of quality education; and whose ward has not secured admission against 25 per cent quota of free education under the RTE Act. Thus understood, even Section 7 of the Act of 2016 does not violate the fundamental right guaranteed under Article 19(1)(g) of the Constitution in respect of establishment of educational institution

38. Needless to underscore that the Divisional Commissioner, who is empowered to nominate two representatives of private schools would keep in mind that his/her nominees are from the schools within the divisional area and at least one amongst them should be chosen from a minority school so that representation is given to all stakeholders, including minority and non­minority private unaided schools. At the same time, it must be borne in mind that such a person is already not a member of the SLFC of any school in the divisional area. The dispensation provided in Section 7, is, thus, to create an independent machinery for adjudication of the question as to whether the fee structure proposed/determined by the school 41 Management of the concerned school entails in profiteering, commercialisation or otherwise

42. Section 10 deals with constitution of Revision Committee. This Committee discharges the function of an appellate authority where the aggrieved party, namely, school Management or the Parent­Teachers Association can assail the decision of the DFRC. This is a final adjudicatory body created under Section 10 consisting of official members including two representatives of 45 private schools nominated by the State Government and two representatives of parents nominated by the State Government. This is again a broad­ based independent Committee to consider the revision preferred against the decision of the DFRC, constituted on similar lines. The latter Committee is constituted under Section 7 of the Act of 2016. The observations made in reference to the constitution of the DFRC under Section 7 hitherto would, therefore, apply with full force to this provision as well.

The bench also observed that Section 6 does not undermine the autonomy of the school Management in the matter of determination of fee structure itself.