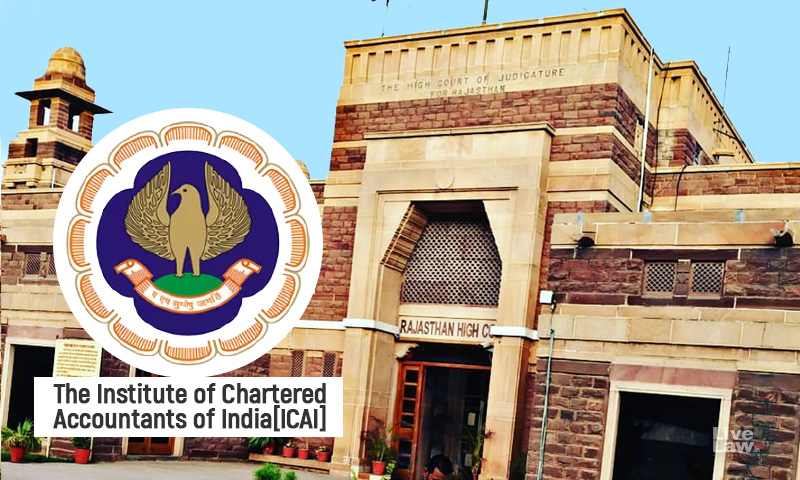 The Rajasthan High Court has set aside a 'vindictive' and 'extremely oppressive' decision of the Institute of Chartered Accountants of India (ICAI), cancelling the CA intermediate exam result of a 21-year old woman over alleged 'derogatory' remarks that she had made in an email to the institute.The petitioner Risha Lodha had written an email to the ICAI President in November 2020...

The Rajasthan High Court has set aside a 'vindictive' and 'extremely oppressive' decision of the Institute of Chartered Accountants of India (ICAI), cancelling the CA intermediate exam result of a 21-year old woman over alleged 'derogatory' remarks that she had made in an email to the institute.

The petitioner Risha Lodha had written an email to the ICAI President in November 2020 highlighting the situation of spread of Covid-19 and cautioned that if the examinations are held between November 21st and December 14th, 2020, it will lead to exponential growth in number of Covid cases. 'Do you not understand the seriousness of the situation or are you just ignorant?' she had written.

Stating that there is hardly anything in the e-mail for which it can be construed to be derogatory, a Single Bench of Justice Dinesh Mehta observed,

"The Institute of Chartered Accountants of India is a statutory body. Hence, its decisions, actions and adjudication are supposed to conform to the standards expected of State or instrumentality of a State.

A State that suppresses freedom of speech and inflicts or imposes extreme punishment treating an act or attempt of criticism and/or if it treats any suggestion for improvement as a challenge to its authority or supremacy is a State, that disregards rather violates fundamental rights of a citizens guaranteed by Article 19(1)(a) of our Constitution."

Though the Bench agreed that she could have been more calibrated in her "emotional utterances" and could have avoided some of the sentences, it said that it cannot countenance institute's stand that the contents of her mail were derogatory.

"Though the petitioner made many emotional comments, but the thrust of her e-mail was only to suggest that online infrastructure be developed so that all levels of CA Examinations be conducted," the Single Bench observed.

"The very initiation of the proceedings against the petitioner alleging that the e-mail contains derogatory remarks was uncalled for and unwarranted. On the contrary, this Court feels that action of the respondents was rather over bearing or high handed", the Court said in the judgment.

The Bench noted that in response to Risha's email, the Institute put her result on hold and sought an explanation as to why disciplinary proceedings not be initiated against her for the same.

Thereafter, Risha sent a prompt e-mail expressing her unconditional apology, admitting therein that she lost her cool and that she is ashamed of her actions.

She later appeared before the Examination Committee, which had instituted the action, at Jaipur and put forth her explanation.

However, she was kept uninformed about the result of the hearing and it is only when the CA Intermediate Examinations result was declared on March 26, 2021, the Petitioner found that her result has been cancelled, under caption "Adopted Unfair Means. Letter Follows".

She was then informed that the Examination Committee had reached a conclusion that she was guilty of making derogatory remarks in the captioned examination and thus, her result of CA Intermediate Examination held in January, 2021 had been cancelled.

"One would surely wonder as to what more could be expected of the petitioner for seeking redemption of her purported misdeeds or misdemeanor at the altar of the Examination Committee?

Not only the initiation of proceedings against the petitioner, but also the manner in which, the proceedings have been conducted so also its culmination in cancellation of petitioner's result are without jurisdiction and against the principles of natural justice on one hand and capricious and arbitrary on the other," the High Court said at the outset.

The Court said that it is rather disturbing that the Petitioner was personally heard and yet no order was ever communicated to her. She came to know that her result had been cancelled that too, citing "adopted unfair means".

"The respondents' action of reflecting such information rather mis-information in its official website, in clear contrast with the actual facts is beyond acceptable limits," the Bench remarked while expressing concern over Petitioner's plight who was confronted with the 'unfair means' remark.

The Bench further noted that since there was no indication of cancellation of result neither in the Institute's communications with the Petitioner, there remains not even an iota of doubt that the impugned order of cancelling the result is inherently illegal, falling foul to Article 14 of the Constitution of India and the same is liable to be quashed.

It held that the facts of the case do not fall within the ambit of powers of Examination Committee catalogued in Regulation 41 and 176 of the Regulations of 1988 for cancellation of exam for using unfair means. The Court noted that as per the Rules, the Committee can act only against actions in an examination hall.

"Hence, the proceedings under challenge were void since their inception or very beginning," it held.

"The impugned decision cancelling petitioner's result is nothing short of colourable exercise of powers. It also showcases vindictiveness of respondent Committee", the court observed.

Lastly, reminding the Institute of the responsibility that comes with the great power that it enjoys, the Single Bench remarked,

"The Institute which is adorned with enormous power to elevate or uplift the lives of vulnerable & struggling students, is required to practice greater restraint in invoking its powers especially against the students. Instant case called for not just restraint but absolute abstinence from initiating any action against the petitioner, particularly when she had submitted a beseeching response. But for the reasons best known to the Examination Committee, instead of burying the hatchet, it literally opened a battle-front and issued a notice to the petitioner."

The Court stopped short of imposing exemplary costs on the Institute but directed it to pay 20,000/- litigation cost to the Petitioner. It has declared her result, as passed, as submitted to it by the Institute in a sealed envelope.