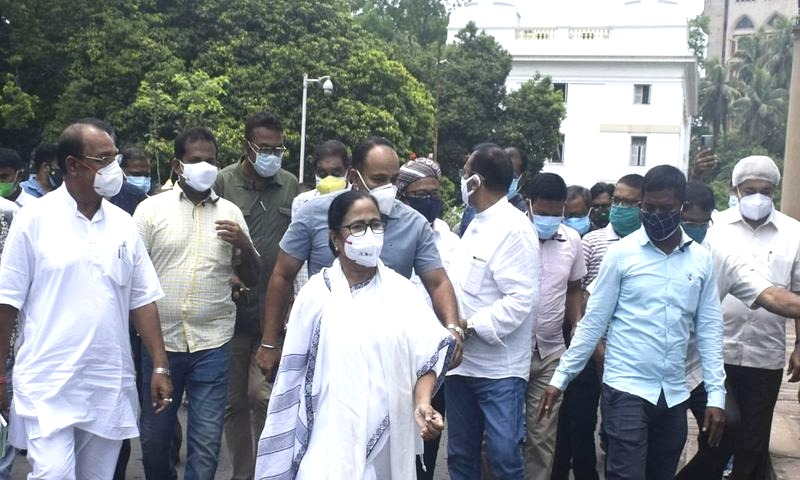 Taking exception to the dharna led by West Bengal Chief Minister Mamata Banerjee in front of CBI office against the arrest of four TMC leaders in the Narada scam, and the presence of state law minister with 2000-3000 supporters in the premises of the trial court which was hearing the bail applications of the accused, the Calcutta High Court observed that the confidence of the people in...

Taking exception to the dharna led by West Bengal Chief Minister Mamata Banerjee in front of CBI office against the arrest of four TMC leaders in the Narada scam, and the presence of state law minister with 2000-3000 supporters in the premises of the trial court which was hearing the bail applications of the accused, the Calcutta High Court observed that the confidence of the people in the justice system will be eroded if such incidents occur, while political leaders arrested, are being produced in the Court.

A division bench comprising Acting Chief Justice Rajesh Bindal and Justice Arjit Banerjee directed that the accused person shall be treated to be in judicial custody till further orders.

"Public trust and confidence in the judicial system is more important, it being the last resort. They may have a feeling that it is not the rule of law that prevails but it is a mob that has an upper hand and especially in a case where it is led by the Chief Minister of the State in the office of CBI and by the Law Minister of the State in the Court Complex. If the parties to litigation believe in the Rule of Law such a system is not followed. The idea was different", the Court observed.

The Court began its order by referring to the "extra-ordinary situation" of the Chief Minister Mamata Banerjee and Law Minister Moloy Ghatak leading a large mob of supporters to protest the CBI's arrest of four TMC leaders.

"This court has been called upon to deal with an extra-ordinary situation where Chief Minister of the State can sit on a dharna outside the office of the Central Bureau of Investigation (for short, 'CBI')along with her supporters,which had investigated the case and was to present a charge-sheet in court against the accused who are senior party leaders of the party in power in the State, some of them being Ministers. Not only this, the Law Minister of the State was present in Court where the accused were to be presented along with mob of 2000 to 3000 supporters", the Court said in the order.

Facts of the Case

A case was registered under sec. 120B IPC, sec. 7, 13 (2) r/w 13 (1) (a) & (d) of the Prevention of Corruption Act 1988 against the accused persons alleging that they had accepted a substantial amount of illegal gratification from one sting operator namely Mathew Samuel.

The accused persons were arrested on Monday morning and were thereafter produced before Special CBI Court.

It was immediately after their arrest that a significant number of followers gheraoed the CBI office and did not allow the CBI officers to move out of their office to enable them to produce them in court.

Moreover, Chief Minister of the State, Mamata Banerjee also arrived at the spot and sat on dharna along with the followers seeking an Unconditional release of the accused persons was sought from the CBI office.

Submitting that even the CM of the State sat on dharna, Mehta apprised the Court that the Law Minister of the State went to the court where the accused persons were to be presented along with a "crowd of 2000 to 3000 supporters and remained in court throughout the day."

In view of this, Mehta submitted the powers of the Court to transfer trial to another court under sec. 407 Cr.P.C. can be exercised if it is expedient in the ends of justice to do so.

Submitting so, it was argued that the Court must take up the matter immediately as otherwise, a message will go to the people that any order can be secured by pressure with "mobocracy".

Advocate General for the State of WB submitted that CBI officers were provided full protection by the local police for discharge of their duty. There is no official complaint filed by the CBI with the police about any incident. The AG also said that a proper application for transfer in terms of Section 407 of the Code of Criminal Procedure has not been filed by the CBI.

The High Court however said that the situation prevailing in the trial court, as pointed out by the Solicitor General, was sufficient to take cognizance of the matter for consideration of issue regarding transfer of trial.

The Calcutta High Court noted that a case under the Prevention of Corruption Act was registered against many accused including some of the Ministers in the present Government in the State of West Bengal, on the directions issued by the High Court.

In these facts and circumstances, the Court observed,

The Court added that the aforesaid facts are sufficient to take cognizance of the present matter with reference to the request of the learned Solicitor General of India for examination of the issue regarding the transfer of the trial.

However, the Court did not touch upon the merits of the controversy but the manner in which pressure was sought to be put will not inspire the confidence of the people in the rule of law.

Thus, the Court stayed the Order while noting:

"As during the period when the arguments were heard, the order was passed by the Court below, we deem it appropriate to stay that order and direct that the accused person shall be treated to be in judicial custody till further orders. The authority in whose custody they are kept shall ensure that they have all medical facilities available as are required and they are treated in terms of the provisions of the Jail Manual."

The matter will be considered for further hearing tomorrow, May 19.