Over 300 Persons Had Been In Detention For Over 3 Years:Amicus Curiae Prashant Bhushan Tells SC in Assam Detention Centre Case 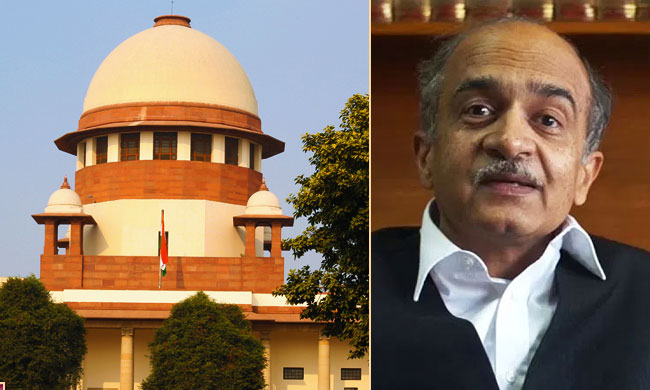 The Supreme Court today sought a response from the Central government on a note prepared by Amicus Curiae Advocate Prashant Bhushan regarding those who have been detained across 6 detention centres in Assam, after having been declared foreigners by the Foreigners' Tribunals.

In May 2019 the apex court had ordered for the release of all those declared foreigners who had spent more than 3 years in detention. This release was to be based on the furnishing of two sureties of Rs. 1 lakh each by persons who were Indian citizens, along with the submission of a verifiable address and biometric information. Further, the person concerned was mandated to report to the designated police station once every week. Advocate Prashant Bhushan was appointed Amicus and was to survey the status of detainees in these centres and report back to the court.

Citing media reports, it has been informed to the court that those who had been in detention for more than 3 years are gradually being released, but alleges that the process of implementing the May 2019 order began quite a few months after the said order was passed. This, according to Bhushan is directly attributable to the "very onerous conditions that have been imposed for the release of these detainees." The problem, submitted in the note, is that a number of the detainees are poor and find it difficult to furnish two sureties of Rs. 1 lakh each, as per the conditions. Further, many of them are daily wage earners who live in riverine islands, far away from the designated local police stations. This makes it difficult for them to meet the condition of reporting to these police stations every week. Doing so entails losing out on an entire day's wages in addition to spending money to travel the distance, a trip which usually takes up the entire day. It has also been alleged that police officials demand bribes from these people when they report themselves.

In view of these problems, the Amicus made certain suggestions in order to enable the detainees to meet the conditions of their release more easily. Firstly, the number of sureties be reduced from two to one, and the amount thereof be reduced from Rs. 1 lakh to Rs. 50,000. Secondly, the condition of reporting to a police station every week be modified to doing so once every month.

Moving on, Bhushan refers to Assam government's affidavit wherein it has been stated that 166 people, of which 4 were declared foreigners, have been repatriated to their native land. Comparing this figure of 4 persons against the total number of declared foreigners till August 2018 (58,627 declared foreigners), as submitted by Assam in the same affidavit, the difficulty in deporting such people has been highlighted. The problem, according to the report, lies in most people claiming to be Indian citizens "who have been declared foreigners by the Tribunal either by ex-parte orders of often on hyper technical grounds like variations in names and age and also because of typographical errors in citizenship documents like voter lists, etc." Relying on international standards, instruments and international judgments, which are said to be in consonance with rights under the Indian Constitution, it has been urged that no one should be subject to arbitrary detention since liberty can only be deprived to an extent that "is in accordance with a just, fair and reasonable procedure established by law." The government, it is said, must be able to show removal of immigrants in the foreseeable future to justify detaining such immigrants. Citing international law precedent it has also been submitted that only in exceptional circumstances can a person's liberty be curbed by detaining them for a maximum of up to 6 months, but not beyond that.

Questions have thereafter been raised regarding the manner in which Foreigners Tribunals go about conducting their business. It has been alleged that detainees have been declared non-Indians and rendered stateless, where 2/3rd of the orders are ex-parte. A gloomy picture has been painted in suggesting that there are hundreds of detainees who are likely to remain in detention centres indefinitely as "there is no prospect of their being deported in the absence of any agreement for repatriation between India and other foreign country including Bangladesh". He refers to the findings of the People's Tribunal, conducted in September 2019, comprising of retired Supreme Court Justices, Kurian Joseph and Madan B Lokur JJ, along with retired Chief Justice of the Delhi High Court Justice AP Shah amongst other eminent persons (who heard testimonials about human cost of the NRC process in Assam and the functioning of Tribunals) to buttress his point.

Another media report from January 2020 has been cited to raise concerns over the death of 29 detainees in these centres in the last three years. "The causes of death have officially been reported as "due to illness", however family members of those who have died, as reported, have talked about the anxiety and mental trauma and lack of adequate and timely health care facilities, as the cause of death of these detainees."

This will be responded to by the centre and the matter will come up for consideration again tentatively around the second or third week of March.

The Petition was originally filed by Activist Harsh Mander Seeking enforcement of fundamental rights under Articles 14 and 21 of the Constitution of India, of those people who are being held in such detention centers in the state, and for them to be treated as refugees, pending their repatriation.

In May 2019 Hash Mander filed a petition seeking recusal of then Chief Justice Gogoi from hearing the Assam Detention Centres Case.

Chief Justice Gogoi refused to recuse from hearing and the Bench removed the name of the petitioner from the records and appointed Legal Services authority as the petitioner in the case.

Mander's previous Counsel Prashant Bhushan had been appointed as the Amicus Curie in the case.