[Tripura Marriage Raids By DM] To Conduct Impartial Inquiry It Is Essential To Shift District Magistrate Out Of Agartala: High Court 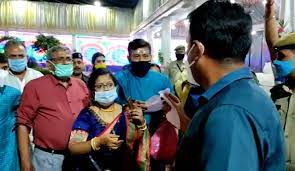 The Tripura High Court on Monday issued notice in a PIL seeking criminal action against the District Magistrate for misusing and abusing his official authority in relation to a viral video of an incident that took place on 26th April 2021 in Agartala wherein a marriage function was stopped midway by the DM and his team which had allegedly run past the covid curfew hours in the city.

A division bench comprising of Chief Justice Akil Kureshi and Justice SG Chattopadhyay issued a bunch of interim directions while issuing notice including shifting of the DM out of Agartala after having a prima facie view that it would be necessary to do so "in order to conduct an impartial fact finding inquiry regarding the incident and the role played by the D.M."

The petition, filed by the priest who had performed the marriage ceremony, claims that the DM had "behaved improperly with the people present and had exceeded his powers." Stating thus, the plea sought several prayers including individual criminal action against the DM and also against the members of his team who had accompanied him to the marriage hall by conducting a departmental inquiry against them.

After the video of the incident went viral on social media, the State Government had instituted a two member Committee to inquire into the incident and for submitting a report in the incident. In another development in the case, the DM concerned was suspended by the Government vide order dated 2nd May 2021 till further orders.

While hearing the parties in camera, the Court, after opining that the issue needs consideration, went ahead to observe that some prayers in the PIL cannot be entertained.

The Court observed that the prayer seeking action against the members of the team led by the DM cannot be entertained as they were "merely carrying out the orders issued to them by their superior."

"Even if there is any lacuna in issuing such orders or exceeding of the jurisdiction by the authority, this support staff cannot be made answerable for their actions. At the time when the entire country is facing an extremely difficult situation of managing corona virus spread, we would certainly not send signals to the foot soldiers that carrying out the orders of their superiors can expose them to inquiries." The Court observed.

The Court further requested the DM concerned to not make any public statements in relation to the incident till further orders.

On the request of the Advocate General appearing for the State to prevent the media to publish news in relation to the court proceedings, the Court observed thus:

"We are not inclined to issue any such general gag order. Freedom of press is a valuable fundamental right and relates to the right of the people of excess to information. Such right cannot be lightly curtailed. We, however, assure learned Advocate General of two things. One, no amount of sensationalization of the issue from any quarter would hamper our judgment and secondly, if any instance of any publication which is either contemptuous or is defamatory is brought to our notice, the same can always be dealt with on case to case basis. In any case, we expect the media to be responsible and publish the news as truthfully as the events have taken place."

Issuing notice to the respondents in the plea, the Court issued the following interim measures:

- We are of the strong prima facie view that in order to conduct an impartial fact finding inquiry regarding the incident and the role played by the D.M.; which is absolutely imperative; it would be essential that he is shifted out of Agartala. Any such inquiry would necessarily require recording of statements of witnesses. It would be difficult for many witnesses to come forward and to give truthful account of the incident if the D.M. is retained at Agartala. We would strongly request the learned Advocate General to take instructions from the Government on this aspect of the matter and revert back to the Court on the next date of hearing with necessary instructions.

- The District Magistrate shall not make any public statements in any form including to media be it electronic, print or social media in relation to the incident of the night of 26th April, 2021 and the subsequent inquiry which is pending against him.

- Until further orders, the inquiry instituted against the District Magistrate shall not proceed further.

- The District Magistrate shall also place on record any order of suspending the license of the marriage halls if he has passed after 26th of April, 2021 incident.