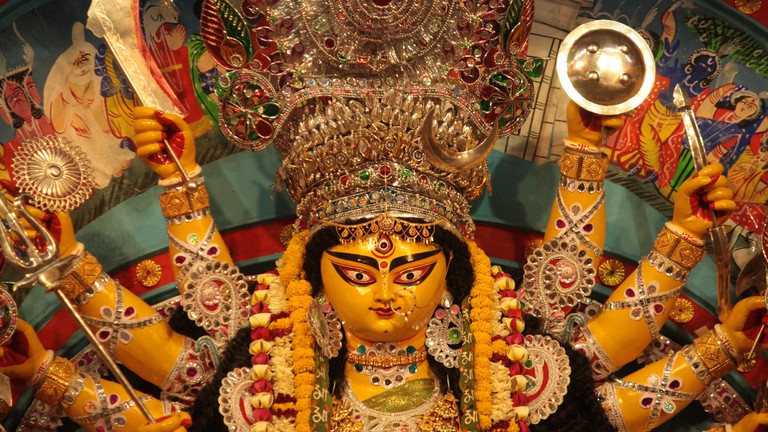 The Calcutta High Court on Friday (16th October) refused to invalidate the State Government's notification which provided for disbursements of Rs. 50,000 each for Committees/Organisers of Durga Puja festivities across the State.

The Bench of Justice Sanjib Banerjee and Justice Arijit Banerjee was hearing a plea challenging the state government's decision and the propriety of such grant on diverse counts.

Notably, On September 24, Chief Minister Mamata Banerjee had announced the grant and other incentives for the puja organisers.

Significantly, the total cost to the exchequer is to the tune of Rs.170 crore and, according to the State, the disbursement commenced after the publication of a notification of October 1, 2020 issued by the Home and Hill Affairs Department of the State.

Plea before the Court

The writ petitioner claimed that the provision for the grant was not included in the budget and, as such, it has to be seen as a grant under Article 282 of the Constitution.

The relevant provision was placed and it was submitted that it is only in an emergency situation that such provision may be resorted to and the grant must be for some public activity or purpose.

The fundamental premise on which the Government decision was attacked was, that it ran counter to the basic feature of secularism as enshrined in the Constitution. It was contended that public money couldn't be frittered away even by elected representatives or persons in constitutional posts.

The petitioner emphasised that it might be against the constitutional ethos to finance the pujas for the purpose of undertaking religious activities, especially when such benefit is not conferred on others.

Stand of the State before the Court

The State argued that the grant had been made pursuant to due budgetary allocation therefor and strictly on the basis of the notification of October 1, 2020. In the budget papers for the financial year 2020-21, there was a head of expenses on account of police in the State.

One of the sub-headings referred to the grant to puja organisers and it was apparent that a sum of Rs.40 crore was allocated for such purpose. The State averred that if the legislature deemed it fit to make a budgetary allocation for grant to puja organisers, any objection thereto ought to have been raised in the House itself and may not be carried to the Court at the time of disbursement.

"There is some substance in the State's submission that once the grant has been made on the basis of a budgetary allocation therefore, the Court should be slow to interfere in the matter. It is also, prima facie, accepted that since Durga Puja may be the biggest festival in the State, irrespective of such festival being connected with a religious occasion, the festivities can be the springboard for promoting socially relevant programmes and there may not be any religious flavour to such secular programmes being pursued." (emphasis supplied)

"The primary purpose, in this case, is, as indicated in the first recital, to strengthen the bond between the police authorities and the citizens and facilitating the involvement of women in assisting community policing activities. To such extent, the matter may not call for immediate interference, without a more in-depth deliberation and consideration."

At the same time, it appeared to the Court that there was an increase in the "amount of assistance" (from 40 Crore to 170 Crore), to which, the State submitted that it was so, in view of the pandemic and the need, in such context, to procure "masks, hand sanitizers, face shields etc. for use in and around the Puja pandals."

The State also submitted that along with the cheques handed over to the puja organisers, copies of the notification of October 1, 2020 have also been made available.

"The funds are not meant for the augmentation of resources to conduct puja activities or for any musical soiree or for the entertainment of the puja organisers or others; they are strictly meant for a public purpose to further strengthen the bond between the police and the citizens and involvement of women in assisting community policing on one hand and for the purpose of procurement of the specified items on the other." (emphasis supplied)

However, to avoid any confusion which may have arisen, particularly in the light of the initial announcement that was made on September 24, 2020, vis-a-vis the contents of the notification of October 1, 2020, the Court ordered that the templates should be prepared indicating the purposes in the following manner:-

1. The money disbursed should be used approximately to the tune of 25 per cent for the purpose of programmes that strengthen the bond between police authorities and the citizens and for facilitating the involvement of women in assisting community policing activities.

2. The rest of the money made available should be utilised strictly for the purpose of procurement of 7 masks, hand sanitizers, face shields etc. for use in and around the puja pandals.

3. All expenses should be backed by appropriate bills and vouchers to substantiate the utilization certificates that must be submitted in terms of the notification of October 1, 2020. The utilization certificates, along with all documents in support thereof must be submitted to the Sub-Divisional Officers in the districts and to the designated officers within the jurisdiction of the Kolkata Police by November 10, 2020."

The Court further ordered that Leaflets and handbills or notices incorporating the words indicated in the immediately preceding paragraph should immediately be prepared by the police authorities for circulation to all the puja organisers who have received the disbursements.

Further, it was ordered that such exercise should be completed by October 22, 2020. The personnel who have made the disbursements have to ensure that such leaflets and notices are circulated and report compliance to the Director-General of the State Police within a week after Laxmi Puja.

The Director-General was directed to affirm an affidavit confirming such compliance by November 17, 2020. It was made clear that the office-bearers of the organisers of the various pujas will remain personally responsible for ensuring that such funds made available to them for the public purposes, as indicated above, are used only for such purposes and no other.