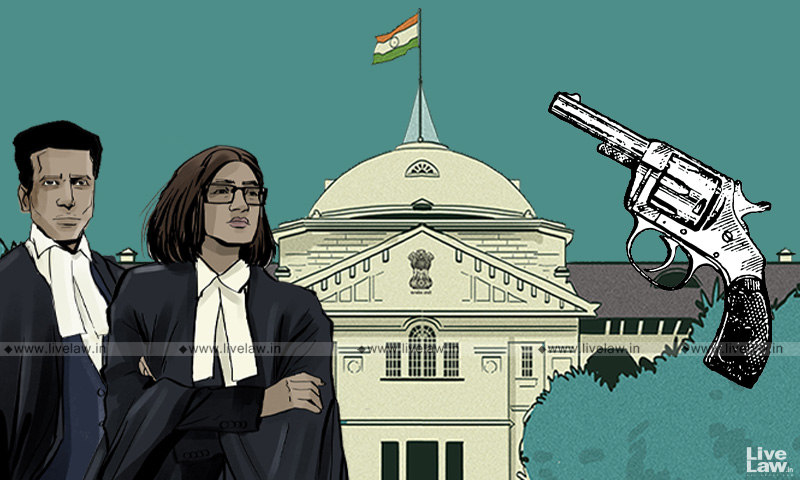 While dealing with a lawyer's plea challenging the firearm licence authority's decision to reject his application, the Allahabad High Court recently observed that a general trend to have a firearm licence by an Advocate without any good reason is not appreciable and it is not in the interest of the noble profession of Advocate.

The Bench of Justice Saurabh Shyam Shamshery further opined that if an Advocate requires a firearm licence for his personal and professional safety, it would be a very dangerous practice.

The Court was hearing the plea of an Advocate, Ram Milan, whose application for firearm license was rejected by Licensing Authority as well as the Appellate Authority after coming to the conclusion that he had no ground for grant of a firearm licence.

Essentially, the Advocate had applied for a firearm license for Revolver under Section 13 of the Arms Act, 1959 r/w the Arms Rules, 2016 for his personal and professional safety on the ground that there was an attempt to murder him and some local persons tried to molest his female family members by entering in his house.

In this regard, he referred to two FIRs registered in the matters and argued that since he has to travel for the purpose of his profession and for his personal and professional safety, a firearm license was required.

On the other hand, the Standing Counsel for the state submitted that there was no material on record that the petitioner was a victim of a crime or had a genuine need to grant a firearm licence.

He further contended that it is well settled that subjective satisfaction of Licensing Authority cannot be interfered with in writ jurisdiction in absence of any reasonable ground.

At the outset, the Court noted that no documentary evidence on record was submitted to show that the petitioner was indeed an Advocate. It was also not clear to the Court as to what was the present status of criminal cases.

Further, the Court observed that the subjective satisfaction of Licensing Authority cannot be interfered with by the Court under the writ jurisdiction in absence of any material, that there was no basis for such satisfaction or the basis of satisfaction is based on surmises and conjectures.

In the present case, the Court noted, the Licensing Authority had taken into consideration the above factors also and on the basis of material available found that the petitioner's case does not fall under the aforesaid category and rejected the application for grant of a firearm licence.

Importantly, stressing that the profession of an Advocate is a noble profession, the Court opined that the general trend to have a firearm licence by an Advocate without any good reason is not appreciable.

Further, underscoring that if such applications are allowed without any concrete basis, a day will come that every Advocate will carry an arm inside the Court premises, the Court remarked thus:

"In case there is a threat in the mind of Advocate, the entire basis of nobleness of the profession would fall. Every Advocate has a weapon of his legal arguments with bullets of judgments passed by High Courts and Supreme Court in support of his submission, which are enough to provide safety to his profession and client and are sufficient to demand justice from the Courts. Normally they do not need firearm for their professional safety."

However, before dismissing the plea, the Court did clarify that there is no bar for the Advocate to apply for a firearm licence and observed that their application can be considered in accordance with law under the provisions of Arms Act, 1959 read with Arms Rules, 2016.