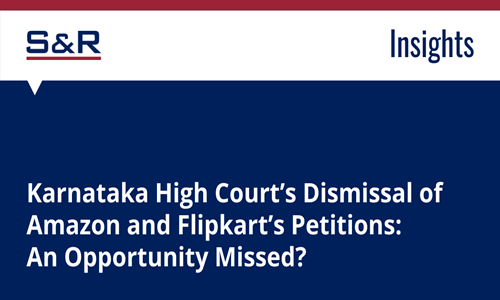 While the Karnataka High Court's judgment appears to follow well-established legal principles laid down by the Supreme Court of India (the "Supreme Court"), a closer examination reveals that the judgment gives only a cursory consideration to some of the key arguments raised by Amazon and Flipkart (together, the "E-Commerce Platforms").

A. Brief background of the case and the parties involved

Amazon and Flipkart operate 'online marketplaces' which facilitate third party sellers in selling their goods to the end-consumers. Both the E-Commerce Platforms have their registered offices in Bengaluru, Karnataka.

Delhi Vyapar Mahasangh ("DVM"), a registered society comprising of 'micro, small and medium enterprise' traders filed an information against the E-Commerce Platforms with the CCI, alleging contravention of certain provisions of the Competition Act relating to anti-competitive agreements and abuse of dominance.

Based on the DVM's information, the CCI issued an order on January 13, 2020 (the "CCI Order"), where it held that the following four practices of the E-Commerce Platforms need to be investigated:

in order to assess whether these are exclusionary tactics used by the E-Commerce Platforms to foreclose competition in contravention of Sections 3(1) and 3(4) of the Competition Act. Separately, the CCI reiterated the settled position that the Competition Act does not cover cases of joint or collective dominance, and accordingly, did not pursue DVM's allegations of abuse of dominance further.

Aggrieved by the CCI Order, the E-Commerce Platforms filed separate writ petitions before the Karnataka High Court (which were clubbed together) with a prayer to set aside the CCI Order and quash the investigation directed by it. On February 14, 2020, the single judge issued an interim stay on the operation of the CCI Order. It is interesting to note that the interim order observed that: "In view of penal provision under the FEMA Act and undertaking given by the Union of India, in the opinion of this Court, ratio of Bharti Airtel Limited is applicable to the case on hand with regard to jurisdictional facts."

Subsequently, on June 11, 2021, the single judge bench of the Karnataka High Court issued its judgment (the "Judgment") dismissing the writ petitions filed by the E-Commerce Platforms. Based on media reports, we understand that the E-Commerce Platforms have, on June 16, 2021, preferred an appeal against this Judgment before a division bench of the Karnataka High Court.[3]

This note analyzes the Judgment passed by the single judge bench of the Karnataka High Court.

B. The Karnataka High Court's Judgment

The Judgment dealt with the writ petitions by framing three questions for its consideration.

First, it examined the nature of an order passed under Section 26(1) of the Competition Act. Based on the jurisprudence established by the Supreme Court in its judgments in CCI v. Steel Authority of India Ltd. & Anr.[4] (the "SAIL Decision") and CCI v. Bharti Airtel Ltd. & Ors.[5] (the "Airtel Decision"), held that a Section 26(1) order is in the nature of an 'administrative direction' by the CCI to one of its departments and is passed without entering upon any adjudicatory process.

Next, the Judgment assessed the requirement of notice and hearing prior to issuing a Section 26(1) order, and here again, the court relied on well-established precedents (i.e., the SAIL Decision and the Airtel Decision) to hold that the CCI is not mandatorily required to issue notice, or provide a hearing, to any party prior to forming its prima facie opinion for the purposes on Section 26(1) of the Competition Act.

Finally, the Judgment considered whether the CCI Order "calls for interference" and observed that at the stage of initiating an investigation, the CCI is required to form an opinion as to the existence of a prima facie case, and "a plain reading of the impugned order shows that [the] Commission has looked into the information in detail and applied its mind".

Accordingly, being satisfied that the limited grounds for judicial review under Article 226 of the Constitution of India were not met in this matter, the single judge bench of the Karnataka High Court dismissed the writ petitions while holding that it would be unwise to prejudge the issues at this stage and scuttle the CCI's investigation.

C. Analysis of the Judgment

As stated above, in deciding the first two questions framed in the Judgment, the Karnataka High Court followed the settled law, as enunciated by the Supreme Court. However, some of the observations made in the Judgment in reaching the conclusion on the third question, merit further consideration.

Relying on the Airtel Decision, Amazon argued that the CCI's jurisdiction was barred as a result of the ongoing investigation by the Directorate of Enforcement (the "ED"). The bench dismissed this argument on the basis that: (i) there are judicial precedents which support the position that a statutory body can investigate a matter while investigations by the ED or Registrar of Companies are also in progress, and (ii) an ED investigation under the Foreign Direct Investment policy does not offer any immunity or exemption from the applicability of other statutes, such as the Competition Act.

The Airtel Decision granted precedence to the Telecom Regulatory Authority of India's (the "TRAI") jurisdiction over that of the CCI, since the Supreme Court was of the view that: (i) the TRAI was better suited to decide the dispute between the parties which raised certain 'jurisdictional facts/aspects' (such as interpretation of contractual terms and the rights and obligations of the telecom service providers inter se), and (ii) the dispute with respect to the above-mentioned jurisdictional facts was already pending before the TRAI. It was also held that the CCI could exercise its jurisdiction, if required, after the TRAI had returned its findings on the matter seized by it.

The Judgment seems to have distinguished the Airtel Decision based on the suggestion that there is no sector regulator for e-commerce marketplaces. The appropriate approach may have been to further examine whether the ED's investigation involves issues similar to the ones raised before the CCI, and if yes, whether these issues raise any jurisdictional facts/aspects which could have been more appropriately decided by the ED in the first instance.

In addition, while it may be correct that investigations may be pursued in parallel by a statutory body, however, the question that is relevant is whether any 'jurisdictional facts' are being investigated, and if yes, which authority could more appropriately ascertain such facts. Accordingly, the Judgment's approach may operate to read down the Airtel Decision and effectively render it applicable to limited instances.

Flipkart also argued that the CCI had recently closed a matter brought against Flipkart by the All India Online Vendors Association and not ordered an investigation (the "CCI's AIOVA Order")[6], and accordingly the information filed by DVM should have been treated in a similar manner. In this regard, the Judgment states that the principle of res judicata does not apply to orders passed by CCI, since the Competition Act is aimed at preserving competition in the market and hence operates in rem and not in personam.

Further, the Judgment notes that the CCI's AIOVA Order was set aside by the National Company Law Appellate Tribunal ("NCLAT") on March 4, 2020, and the NCLAT ordered an investigation to be conducted in this matter. However, the Judgment does not reflect the fact that the NCLAT's order was subsequently stayed by the Supreme Court on December 2, 2020 and the stay continues to be in effect currently.

Accordingly, the judicially prudent approach may have been to await the final decision of the Supreme Court in the AIOVA's matter, as opposed to initiating an additional investigation against Flipkart on similar allegations of exclusive dealings and predatory pricing/deep-discounting. The fact that the Supreme Court's stay does not seem to have figured in the court's analysis at all, may leave this Judgment vulnerable to further challenge.

Based on the above, the Judgment seems to have missed an opportunity to settle and explicate the law in cases involving parallel investigations or similar issues, and its handling of these issues may have left the door open to protracted litigation.

More generally, it is noted that the e-commerce sector is still developing, and the online retail market is reported as accounting for a mere 5% of the total retail market in India.[7] This finds consonance in the CCI's AIOVA Order which observes that "the marketplace based e-commerce model is still a relatively nascent and evolving model of retail distribution in India and the Commission is cognizant of the technology-driven nature of this model. Recognizing the growth potential as well as the efficiencies and consumer benefits that such markets can provide, the Commission is of the considered opinion that any intervention in such markets needs to be carefully crafted lest it stifles innovation."

Given this background, the CCI Order seems to represent a shift in the approach from that adopted in the CCI's AIOVA Order. This is also notable since the pandemic may have resulted in the realization of some of the untapped 'efficiencies and consumer benefits' alluded to by the CCI above, including by way of e-commerce platforms supporting the provision of essential (and other) supplies, reducing disruptions, and enabling safe and socially distanced retail. In addition, the services provided by e-commerce platforms have not been limited to metros and Tier-I cities, but have been increasingly availed of by people in Tier II and III towns in India[8].

Accordingly, it is imperative that a clear and coherent policy be devised and implemented in respect of the e-commerce sector in India, since frequent changes and narrow interpretation of laws, and over regulation of the sector will stymie innovation, detract from consumer welfare, erode investor confidence and have a chilling effect on competition. A more circumspect approach will not only instill confidence in the industry but also attract investments and promote economic growth

This insight has been authored by Rajat Sethi (Partner), Simran Dhir (Head of Competition), and Akshat Kulshrestha (Associate). They can be reached on [email protected], [email protected] and [email protected] for any questions. This insight is intended only as a general discussion of issues and is not intended for any solicitation of work. It should not be regarded as legal advice and no legal or business decision should be based on its content. Views are personal.