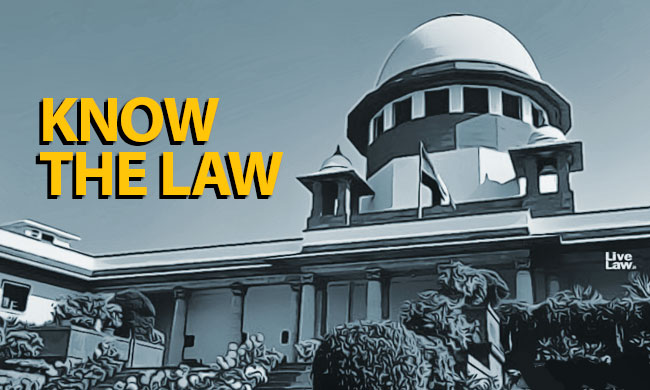 In a recently delivered judgment in the case Rishipal Singh Solanki versus State of Uttar Pradesh and others, the Supreme Court has summarized the principles relating to the determination of the claim of juvenility under the Juvenile Justice Act 2015.

A bench comprising Justices DY Chandrachud and BV Nagarathna delivered the judgment while dismissing a challenging against the declaration of an accused in a criminal case.

The judgment authored by Justice Nagarathna culled out the principles from various precedents and summarized them as below :

(ii) An application claiming juvenility could be made either before the Court or the JJ Board.

(iic) When an application claiming juvenility is made under section 94 of the JJ Act, 2015 before the JJ Board when the matter regarding the alleged commission of offence is pending before a Court, then the procedure contemplated under section 94 of the JJ Act, 2015 would apply. Under the said provision if the JJ Board has reasonable grounds for doubt regarding whether the person brought before it is a child or not, the Board shall undertake the process of age determination by seeking evidence and the age recorded by the JJ Board to be the age of the person so brought before it shall, for the purpose of the JJ Act, 2015, be deemed to be true age of that person. Hence the degree of proof required in such a proceeding before the JJ Board, when an application is filed seeking a claim of juvenility when the trial is before the concerned criminal court, is higher than when an inquiry is made by a court before which the case regarding the commission of the offence is pending (vide section 9 of the JJ Act, 2015).

(iii) That when a claim for juvenility is raised, the burden is on the person raising the claim to satisfy the Court to discharge the initial burden. However, the documents mentioned in Rule 12(3)(a)(i), (ii), and (iii) of the JJ Rules 2007 made under the JJ Act, 2000 or sub-section (2) of section 94 of JJ Act, 2015, shall be sufficient for prima facie satisfaction of the Court. On the basis of the aforesaid documents a presumption of juvenility may be raised.

(iv) The said presumption is however not conclusive proof of the age of juvenility and the same may be rebutted by contra evidence let in by the opposite side.

(v) That the procedure of an inquiry by a Court is not the same thing as declaring the age of the person as a juvenile sought before the JJ Board when the case is pending for trial before the concerned criminal court. In case of an inquiry, the Court records a prima facie conclusion but when there is a determination of age as per sub-section (2) of section 94 of 2015 Act, a declaration is made on the basis of evidence. Also the age recorded by the JJ Board shall be deemed to be the true age of the person brought before it. Thus, the standard of proof in an inquiry is different from that required in a proceeding where the determination and declaration of the age of a person has to be made on the basis of evidence scrutinised and accepted only if worthy of such acceptance.

(vi) That it is neither feasible nor desirable to lay down an abstract formula to determine the age of a person. It has to be on the basis of the material on record and on appreciation of evidence adduced by the parties in each case.

(vii) This Court has observed that a hyper-technical approach should not be adopted when evidence is adduced on behalf of the accused in support of the plea that he was a juvenile.

(viii) If two views are possible on the same evidence, the court should lean in favour of holding the accused to be a juvenile in borderline cases. This is in order to ensure that the benefit of the JJ Act, 2015 is made applicable to the juvenile in conflict with law. At the same time, the Court should ensure that the JJ Act, 2015 is not misused by persons to escape punishment after having committed serious offences.

(ix) That when the determination of age is on the basis of evidence such as school records, it is necessary that the same would have to be considered as per Section 35 of the Indian Evidence Act, inasmuch as any public or official document maintained in the discharge of official duty would have greater credibility than private documents.

(x) Any document which is in consonance with public documents, such as matriculation certificate, could be accepted by the Court or the JJ Board provided such public document is credible and authentic as per the provisions of the Indian Evidence Act viz., section 35 and other provisions.

(xi) Ossification Test cannot be the sole criterion for age determination and a mechanical view regarding the age of a person cannot be adopted solely on the basis of medical opinion by radiological examination. Such evidence is not conclusive evidence but only a very useful guiding factor to be considered in the absence of documents mentioned in Section 94(2) of the JJ Act, 2015.

Also from the judgment - Juvenile Justice Act : Age Recorded By JJ Board Or CWC Deemed To Be True Age Of Accused

Case Title: Rishipal Singh Solanki vs State of UP& Ors