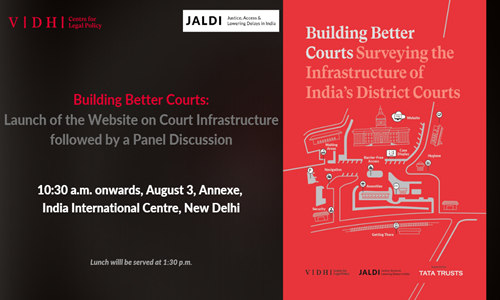 Vidhi commissioned a pan-India survey (of 665 district courts) and interviewed 6650 litigants (10 per district) to understand the status of physical infrastructure of district courts in the country. The data has been analysed and the team has prepared 26 state reports, a national report - Building Better Courts: National Survey of Infrastructure of District Courts and an interactive website aggregating all the data that we have collected, which will be launched on August 3.

The conversation around access to justice is often limited to judicial delays and pendency, while other issues such as court infrastructure are often overlooked. The deficiency in infrastructure is a factor that affects judicial delays and becomes relevant in improving access to justice. Without all necessary support structures, it is not feasible for a user to navigate optimally, making court infrastructure a crucial aspect in determining how efficiently litigants are able to accustom themselves and utilise the available infrastructure. Additions to conventional court structures will have an effect on how litigants from different sections of society perceive, interact, and respond to the physical space of courtrooms.
The launch will be followed with a panel discussion where we will attempt to:

The event will be followed by a networking lunch at 2:00 PM.

The Full agenda for the panel discussion and the list of panellists for the event can be accessed here.