Dosage Of Hate Speech Is Increasing With Law's Delay; Courts Can't Afford To Look On 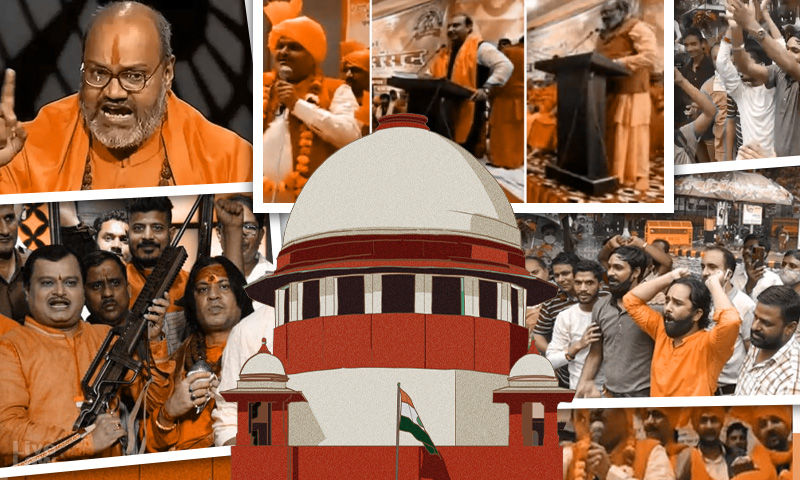 x
To prevent further escalation of hate crimes, it is highly necessary that the Supreme Court makes an impactful intervention.

"Genocide is a process. The Holocaust did not start with the gas chambers. It started with hate speech." -- Adama Dieng, Former UN Special Adviser on the Prevention of Genocide. Hate speeches against the minorities in India -especially targeting the Muslim community- is on an alarming rise with increasing frequency. We saw how mischievous elements sought to communalize the...

Subscription starts from
₹ 1,499+GST
(For 1 Year)
View Plans
Premium account gives you:
Subscribe Now
Already a subscriber?
Login
"Genocide is a process. The Holocaust did not start with the gas chambers. It started with hate speech." -- Adama Dieng, Former UN Special Adviser on the Prevention of Genocide.

Hate speeches against the minorities in India -especially targeting the Muslim community- is on an alarming rise with increasing frequency. We saw how mischievous elements sought to communalize the COVID pandemic by the use of communal hashtags and headlines after the Tablighi Jamaat congregation. Then we saw how a TV Channel (Sudarshan News TV) telecasted shows to communalize the entry of Muslims into civil services. Now it is no longer confined to social media or shrill channels shows. We saw how a violent mob chanted provocative slogans threatening violence during the Jantar Mantar meeting in Delhi in August, even as the police remained onlookers. The situation has frighteningly escalated further. Conclaves under the name "Dharam Sansads" were held in Delhi and Haridwar, where self-styled sants made open calls of violence and boycott against the Muslim community. In the meanwhile, there were campaigns against Friday namaz congregations at designated plots in Guruguram; the administration, succumbing to the mob pressure, banned the prayer congregations. We also saw the sulli-deals and bulli-bai episodes, where apps were developed to attack the dignity of prominent Muslim women journalists and activists by "auctioning" them in public.

In these cases, barring a few arrests – which were made after a lot of public outrage - the responses of the enforcement agencies have been lethargic. The persons involved seem to be enjoying the State patronage – perhaps due to ideological affinity or community clout – and the reluctance of the police to take swift action gives an impression of State complicity.

After the Delhi riots of 2020, the Delhi High Court had directed the Delhi police to take an immediate decision on registering FIR against politicians accused of making inciteful statements. In a dramatic hearing, a bench led by Justice Dr S Muralidhar had played the clips of the speech of BJP leader Kapil Mishra in the open court room, after the police claimed that they were not aware of the contents. The next day, the Solicitor General of India told the Court that the "situation was not conducive" for registering the FIR. A few months later, the Delhi Police told the High Court that there was no evidence to indicate any role played by the accused politicians in instigating riots. Few riot victims have filed a petition seeking a court-monitored SIT probe into the hate speeches preceding riots, and the case is dragging in the High Court. Last month, the Supreme Court asked the High Court to decide the matter within three months.

When a social media campaign to vilify the Muslim community was taking place after the Tabligh Jamaat issue, petitions were filed in the Supreme Court seeking its intervention. The Court refused to entertain the petition, asking how can it stop the trending of communal hashtags.

In the Sudarshan News TV case, the Supreme Court intervened to stop the telecast of the future episodes of its "UPSC Jihad" show, after noting that the intent of the program was to vilify the Muslim community. The Union Ministry of Information and Broadcasting had earlier allowed the telecast of the program after issuing a soft advisory that the show should not violate the program code. It was only after the Supreme Court intervention that the Centre took a firm stand to state that the show is "likely to promote communal attitudes". Though the Court observed during the hearing that it will examine the larger issue relating to the contours of hate speech, the case has not progressed much after that.

The Supreme Court had yet another opportunity to address the issue of hate speech in a case against the TV programs which communalized the COVID pandemic with programs containing anit-Muslim content( this is different from the petitions against communal hashtags, which was mentioned above). In this case, the Court expressed disappointment with the affidavit filed by the Union Government by saying it was "extremely evasive and brazenly short of details". The Court was unhappy with the revised affidavit filed by the Union as well.

"We are not satisfied with your affidavit. We had asked you to tell us what have you done under the Cable TV Act? There is no whisper about that in the affidavit. We must tell you that we are disappointed with the Union's affidavit in these matters", the Court told the Centre.

The Centre's affidavit made no reference to the specific instances of certain media houses communalizing the spread of COVID-19 which were cited by petitioners in the batch case. Instead, it cited certain good examples of reporting on the pandemic to submit that the media reportage was "largely factual".( More on this aspect discussed in this article).

In a later hearing of the case, the Court said that it was concerned with the broadcasts inciting violence and asked the Centre about its powers under the law to regulate the same. After that, this case has also not witnessed any action.

Then happened the Jantar Mantar assembly of August 15, where a pro-Hindutva mob raised provocative slogans against Muslims. In the wake of this incident, a petition was filed in the Supreme Court raising the larger issue of enforcing the police's "duty of care" to prevent hate crimes and to fix accountability on officers who abdicate their statutory duty. The petition was tagged with similar other petitions relating to hate speech.

In December, the Haridwar Dharam Sansad took place, where the scale of hate speech got further intensified. The actors were unabashedly calling for violence against Muslims. Some of those comments bordered on genocidal calls. In fact, certain statements called for the replication of the violence unleashed against Rohingyas in Myanmar. The speeches fulfil the classic "spark in the powder-keg" test of incitement. The videos of the speeches became viral on social media. Many participants of the event have a track record of making inflammatory statements. The police, as usual, was slow to register FIR. It registered the first arrest in the case two days back – almost a month after the meeting- after the Supreme Court issued notice in a PIL seeking action against the Dharam Sansad.

Certain videos have emerged in social media, where the main organizer of the Dharm Sansad event, Yati Narsinghanand, is seen threatening the police openly. The police officials were seen listening to him with a sense of deference. In another video, he was seen making derogatory remarks against the Supreme Court and the Constitution.

There appears to be a recurring pattern at play here, with the complicity or connivance of those in power. Therefore, the routine legal procedures of local police investigation or complaints before the local Magistrates might not be the adequate response.

Hate is a dangerous intoxicant, and its proponents need to step up the dosage to attain the same level of frenzy as before.  The hate campaigners are acting with a sense of impunity and emboldened by the passivity and inaction of authorities, they are pushing the limits.

As per a 2018 study by the NDTV, the use of hateful and divisive language by high-ranking politicians has increased almost 500% since 2014. Majoritarian hate, with the blessings of the State authorities, can unleash monstrous violence, as the horrific examples of Rwanda and Myanmar show. To prevent further escalation of hate crimes, it is highly necessary that the Supreme Court makes an impactful intervention, a la the Lakhimpur Kheri case, which showed how the Court can take the police to task in order to ensure a fair investigation.

Of course, there are larger issues relating to inadequate provisions in the existing law to address hate speech. Yet, a strong signal needs to be sent invoking the existing provisions – howsoever inadequate they are -so that a deterrent effect is created. Because these hate crimes are not mere law and order issues; they vitiate the sense of communal fraternity and attack our country's social fabric. As observed by the Supreme Court in the Amish Devgn case, "In a polity committed to pluralism, hate speech cannot conceivably contribute in any legitimate way to democracy and, in fact, repudiates the right to equality". Only resolute criminal law action can save our Republic from being seized by hate propaganda.

(Manu Sebastian is the Managing Editor of LiveLaw. He may be contacted at [email protected] He tweets @manuvichar)