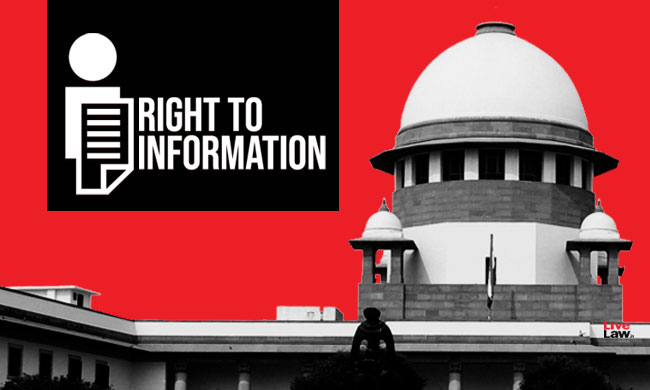 x
The Court's ruling that Court Rules will prevail over RTI Act can have a negative impact on Right to Information.
Your free access to Live Law has expired
To read the article, get a premium account.

The Supreme Court has recently delivered a judgment in the case Chief Information Commissioner vs High Court Of Gujarat on March 4, 2020 . It is likely to have a very negative implication on the citizen's fundamental Right to Information. The Court has ruled that if a citizen wants copies of judicial proceedings, she cannot get it by asking for it in RTI. All High Courts and the Supreme Court have certain rules for conducting their proceedings. Most of them have had a rule stating that parties in a suit may get copies relating to their case. However, those who are not parties to the suit may obtain these if they give an affidavit stating their reasons for seeking this information. If the Court was satisfied with the reasons for seeking information, it would provide it.

This violates the basic premise that all information in government belongs to the citizens and they have a right to access it.

RTI has been accepted as a fundamental right of citizens under Article 19 (1)(a). This covers right to free speech, right to publish and right to information. A citizen does not have to give reasons for exercising any of these, and some reasonable restrictions on all these can be imposed on these as laid down in Article 19 (2). In line with this the RTI Act has specific exemptions u/s 8 in the Act and only these exemptions could be used to deny information to a citizen. To ensure that other laws and constraints could not be used to deny information to the rulers of democracy,-the citizens,- parliament provided a non-obstante clause in Section 22:

'The provisions of this Act shall have effect notwithstanding anything inconsistent therewith contained in the Official Secrets Act, 1923, and any other law for the time being in force or in any instrument having effect by virtue of any law other than this Act.'

This clearly means that the RTI Act will prevail over all laws and rules, including the Official Secrets Act as far as providing information in RTI is concerned. It does not mean that the Official Secrets Act or other acts are repealed. When a request for information is filed under the RTI Act, it can be denied only if the provisions of the RTI Act provide for an exemption. The Supreme Court judgment does not clearly identify how it has concluded that the Supreme Court and High Court rules are not inconsistent with the RTI Act. Instead the Court has concluded that if any law or rule provides for providing information, it would be held to be consistent with the RTI Act. This is clearly erroneous. The Court should have noted the following inconsistencies of the Court rules:

This ruling could subvert the RTI act very seriously. Various public authorities could make the RTI Act irrelevant by creating their own rules for giving information. This ruling also violates a basic premise that if there are more than one route for an activity, it is the citizen's choice to chose the route.

"… Avoiding of tax liability by so arranging commercial affairs that charge of tax is distributed is not prohibited. A tax payer may resort to a device to divert the income before it accrues or arises to him. Effectiveness of the device depends not upon considerations of morality, but on the operation of the Income Tax Act. Legislative injunction in taxing statutes may not, except on peril of penalty, be violated, but it may be lawfully circumvented..." (Emphasis Added)

Therefore, even when the State may lose revenue, the Supreme Court has ruled that an individual tax payer has the liberty to arrange her commercial affairs in order to reduce her tax liability, so long as such arrangement is within the operation of legislation. Drawing an analogy, it certainly stands to reason that a citizen should be able to decide on the method most convenient and expedient by which she wants to obtain information.

The Supreme Court, on various occasions, has ruled that it is incumbent on public sector institutions to be model employers following all laws in letter and spirit. It is humbly submitted that the Supreme Court should become a role model in implementation of the provisions of the Right to Information Act, 2005 in its true letter and spirit and inspire all public authorities to follow its lead in transparency. This would certainly enable better delivery of the citizen's fundamental right to information. The apex court has consistently widened the scope of Article 19 (1)(a) for freedom to speak and publish. We hope it will not treat RTI inconsistently.

(The author is a former Central Information Commissioner. Views are personal)