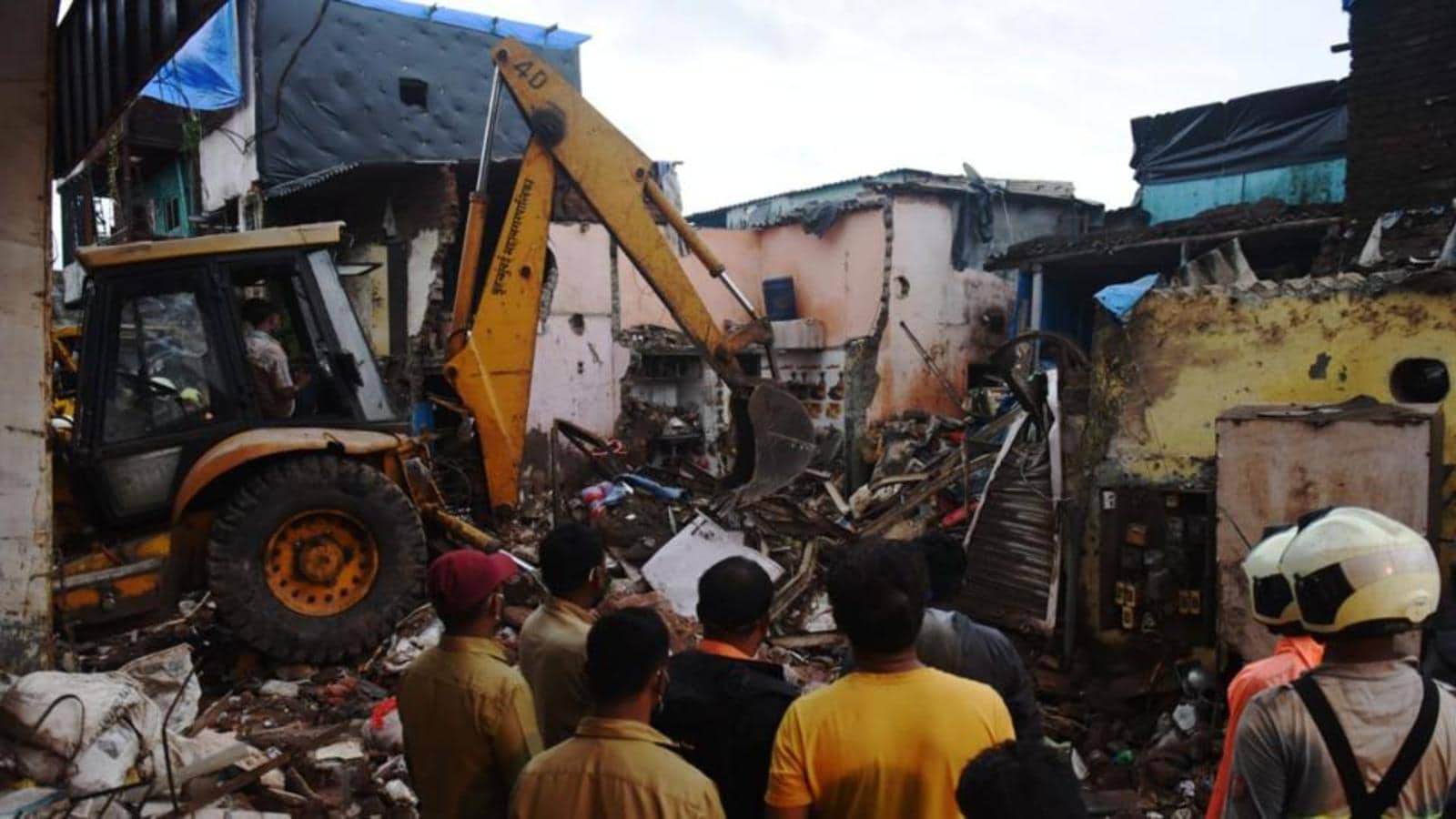 x
Malad Building Collapse(PTI)
The Bombay High Court has ordered a judicial inquiry into the collapse of a ground-plus two-storey building in Mumbai on Wednesday, in which 12 people lost their lives, including 8 children.

Twenty-five people have died in four building collapses in the Mumbai Metropolitan Region in a month.

"Deeply pained" that so many casualties from Wednesday were children, the court remarked there is utter lawlessness in Municipal Wards, and stakeholders had neglected their responsibilities.

"We are thinking of paediatric wards for children for the third wave, and this collapse has killed eight innocent children. Are lives so cheap? How many more lives will be lost?" Chief Justice Dipankar Datta asked.

A bench of Chief Justice and Justice GS Kulkarni passed the order in a suo motu PIL to "put an end to the menace that unauthorised and dilapidated buildings pose to humankind" after 38 people lost their lives in September 2020 owing to unauthorised construction in Bhiwandi, a town outside Mumbai.

The court sought a preliminary report from the inquiry commissioner by June 24.

On May 15 and 28, two-buildings collapsed in Ulhasnagar, on June 7 and June 10, collapses were reported at Bandra East and in Malad.

"Were these buildings where demolition orders were passed and courts have stayed the demolitions or are these unauthorised structures and no action was taken. We read the owner (Malad building) performed the final rites of 8 people." the CJ asked.

BMC's counsel Anil Sakhare said the Malad building was on Collectors land and cited a Government Resolution. However, the bench asked if BMC would cease to be the planning authority.

"1/3rd of South Mumbai is on Collectors Land," the bench remarked.

"We will have to hold those in charge of the Malad building responsible for this; we need to initiate criminal action now. We are very sorry to say that with all these municipal corporations, Ulhasnagar, Kalyan Dombivli, we've failed in the planning aspect. We are playing with the lives of the citizens. Drastic, immediate consequences need to be attributed to all those in charge of executing the provisions of law."Justice Kulkarni said.

The bench further observed that corporators should take responsibility and intimate authorities about illegal constructions in their areas.

"All corporators who are elected and responsible should join the social cause. What they are doing? They should bring it to the notice that 'this is happening in my constituency… we will not reach out to voters only at the time of an election.' Is there any responsibility or not?" Justice Kulkarni said.

"First day of the monsoon, one collapse. We appreciate the Municipal Commissioner's covid related work . Why doesn't the municipal commissioner take up these issues now? To bring about accountability, he will face hurdles, and we know what those hurdles are."

The bench observed that stakeholders responsible for attending to such issues are neglecting them, leading to the loss of lives.

Additional Solicitor General Anil Singh also informed the court that nearly all of Malwani (in Malad) was under the Collector and 75% was unauthorised construction.

The Chief Justice was aghast to learn that the Ulhasnagar Municipal Corporation, had legislation to protect illegal structures. Ulhasnagar Corporation's counsel said it was a regularisation process.

"There is legislation to protect unauthorised buildings? Whom does it benefit?"

Justice Kulkarni said this is a monsoon phenomenon exclusive to Mumbai and its surrounding areas.

"Mr. Sakhare, you can realise the pain we are suffering because of the death of children? This is a man-made disaster. Why can't it be stopped? Every monsoon, this has to happen. Lawlessness in municipal wards is costing us innocent lives. Let all the wards be attentive, we are not going to stop at this and keep our orders to be read by nobody."

The bench asked the Advocate General for the State, Ashutosh Kumbhakoni, if they should order a judicial inquiry. "Yes," he responded.

The Cout ordered the inquiry and asked the commissioner appointed to seek assistance from the Amicus Curiae Senior Advocate Sharan Jagtiani.

Earlier in the day, the bench was hearing another suo motu PIL regarding the extension of the life of interim orders when it took exception to an interview by Mayor Kishori Pednekar regarding Malad collapse.

The court said that nothing stopped officials from approaching the court to seek orders against dilapidated structures. It sought a clarification from the Brihanmumbai Municipal Corporation (BMC) and said they would take up the suo motu PIL on building collapses in the afternoon session.

"It's very unfortunate that building collapses are happening and Municipal Corporations and Councils are pointing fingers at us. These buildings have not come up yesterday. Now that authorities are in a soup, they are taking shelters under High Court's orders?

This is not fair. What steps did you take about the building collapse that happened on Wednesday? We won't tolerate politics over building collapses. You dont take steps when it is required and then say high court has stopped us?"

The court then summoned lawyers of all the municipal corporations.

During the afternoon session, BMC's senior counsel clarified that Pednekar was quoted out of context, and he apologised for the same. He said the entire transcript of the interview would be placed on record, but there was no intention to attribute anything to the judiciary.

CJ Datta said there was no need to apologise if the intent was not to blame the judiciary.