Jio has been strategically trying to advance its position by tying up with global technology giants. A look at the latest happenings developments:

Reports indicate Microsoft, currently led by India-born CEO Satya Nadella, and Jio Platforms ("Jio"), Reliance India Limited's ("RIL") technology platform lead by Mukesh Ambani are in advanced talks for a deal that could not only be bigger than the recent Jio-Facebook deal but also transform the technology landscape in India.

Satya Nadella has worked hard to promote Microsoft's Azure. Microsoft and Jio had already formulated a partnership in 2019 to offer free Jio connectivity with Microsoft Azure cloud services to tech start-ups and SMEs in India by 2021.

While most of the world is currently under the shadow of the Covid-19 lockdown and the US-China standoff, Reliance has used this time well to capture global market share in this space. Although there is no clear statement from either company that the deal will definitely go through, one thing is clear – one way or the other Jio is looking to dominate the data space and spearhead India's candidature as a strong global player in the digitalized world market of the future.

What do we know about this deal and what it can do for India?

Though the two tech giants have been in discussions for about a year now, the financial and operational details of the deal are still unclear. This deal, if and when it fructifies, will be monumental for both the companies - not only from a short-term monetary standpoint but also from a long-term business strategy as well as a shot in the arm for Indo-US economic ties.

Both companies are icons of growth, success and shareholder value and their coming together for a common purpose is something to look forward to for India.

Microsoft's intended investment in Jio would be its largest in India till date, much larger than the $200 million infusion in Flipkart for a 1.72% stake in 2017. Microsoft India has generated revenues of about US$ 2 billion in India from its products as well as R&D services for its global parent. Microsoft has, in the past, struck several multi-billion-dollar deals – LinkedIn, Skype, GitHub, and Nokia devices, among others – but almost all of them have been acquisitions rather than a strategic/financial investment. If it's deal with Jio moves ahead it will be the biggest such deal in its 45-year history.

Impact of FDI on the future of telecom in India:

As listed above, a series of investments have been made by global biggies into — including the much-talked-about Saudi-Armaco investment into RIL's petrochemicals and refinery business. If the Microsoft-Jio deal goes through, it would mean that RIL will effectively reduce its US$20 billion debt at an enterprise level to zero. While this will usher in a victory for RIL/Jio, it leaves a lot for its competitors to worry about. With these investments, Jio is set to launch itself as a significant player on the international telecom and technology scene and will cement Jio's role as one of the key drivers of internet and digital adoption in India. 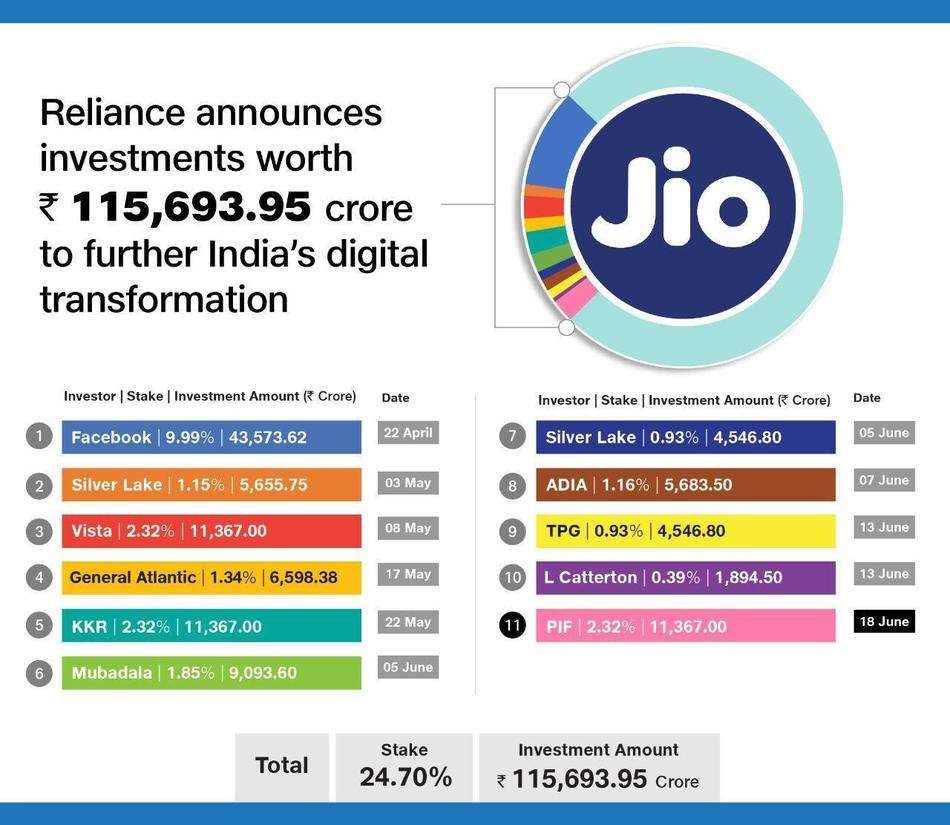 The deal between Jio and Microsoft is likely to trigger a wave of price disruptions in the market. With this possible deal, Jio is declaring its intention to be a market leader in the data services industry. With help from Microsoft, Jio plans to roll-out affordable cloud-based solutions for SMEs. This is to give an impetus to the country's data centre business, enhance affordability of enterprise solutions and drive substantial adoption of data growth among SMEs who are currently not using such services.

Though Jio has so far not revealed any concrete information, it is believed to target SMEs by offering 'data+software service' bundles and hosted apps. Of course, Jio would enjoy an advantage as the first-mover in marketing its cloud services to this segment.

An affordable enterprise services package coupled with demand for video and data privacy needs will definitely boost demand for the data centre business. Jio's upcoming data centres running Microsoft's Azure platform would arm all Indian businesses with the capacity to speed up their digital transformation and be globally competitive.

Such central data centres will serve to consolidate a company's computing resources / servers and data storage to efficiently manage network requirements. These can range in size from a small room with a handful of servers to a sprawling warehouse housing thousands of servers. As much as "30-40% of the 700-800 MW capacity demand growth" in India is expected to come from data centres.

The Microsoft-Jio deal could have a positive impact on how India is seen as an emerging market moving ahead swiftly as an efficient and effective digital player.

With the growth of 4G services throughout India, Jio has accelerated the reach of Google in India. As per business reports, Google was in talks with Jio around the same time as was Facebook. Google may well have been one of the ideal partners for Jio's Long term vision for digital India. Google leads in the online video (YouTube), email (Gmail) and search engine (Chrome) spaces. Google and Facebook both share a dominant position in the digital advertising space. Google also plays a lead a role in developing global cyber security research. In this background a tie-up between Google and Jio seems like a viable option. However, the fact remains that Microsoft seems to be beating Google to it.

Facebook plays a lead role in any potential deal between Reliance Jio and Microsoft or Google. Why is this so??

In April, 2020 when Facebook became the largest external shareholder in Jio by acquiring 9.99% stake in the Company, second to Reliance Industries' stake, the Competition Commission of India stepped in to make the deal more competition friendly. The government and other private players were of the view that Facebook and Jio would have an unfair advantage against other players like Google and Amazon owing to the amount of data Jio and Facebook own. Now, the question that begs to be answered is whether India is ready for such divestment in the data space. A huge concern for the government is on the data privacy front. It is well-known that data theft is one of the biggest threats looming over all of us and this calls for an immediate implementation of data protection laws in India (especially since we still do not have a codified law). The fact that the Facebook-Jio deal went through without data privacy law in place was and is a concern.

- The need for data protection law in India

Reference can be laid here on the famous Puttaswamy Judgment in 2017, the 9-judge bench of the Supreme Court of India unanimously held that the Right to Privacy is protected as an intrinsic part of the Right to Life and Personal Liberty under Article 21 of the Constitution of India.

Now, if and when Reliance chooses to team up with Microsoft (or if at all Google) we have learnt from the Facebook-Jio deal that the government will be forced to pay attention to the impact these deals will have on competition in the technology and data spaces and the urgent need for data protection laws. Without with a codified data protection law to back the Right to Privacy, there are many loopholes in the existing realm of data protection. Data has been projected as the 'new oil' and in such a situation it is best that any and all forms of monopoly be avoided.