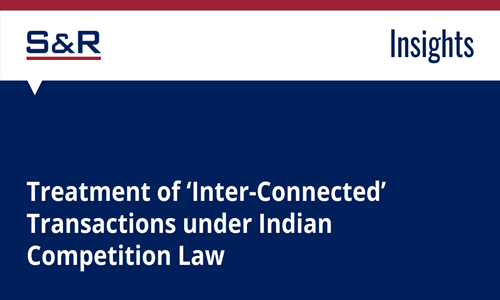 The identification and treatment of transactions that are 'inter-connected with a notifiable 'combination' is fraught with uncertainty. This article aims to provide an overview of the existing Indian merger control framework in the context of 'inter-connected transactions, and address some ambiguities in this regard. A. Applicable Law Under the Competition Act, 2002 (the "Act"),...

The identification and treatment of transactions that are 'inter-connected with a notifiable 'combination' is fraught with uncertainty. This article aims to provide an overview of the existing Indian merger control framework in the context of 'inter-connected transactions, and address some ambiguities in this regard.

Under the Competition Act, 2002 (the "Act"), any merger or acquisition, where the parties to such transaction exceed either the asset or turnover thresholds specified in Section 5, qualifies as a 'combination' and is required to be notified to, and approved by, the Competition Commission of India (the "CCI") prior to completion, unless any exemptions apply.

In addition to the main notifiable combination, as determined in accordance with Section 5 of the Act, Regulation 9(4) of the CCI (Procedure in regard to the transaction of business relating to combinations) Regulations, 2011 (the "Combination Regulations") states that:

"Where the ultimate intended effect of a business transaction is achieved by way of a series of steps or smaller individual transactions which are inter-connected, one or more of which may amount to a combination, a single notice, covering all these transactions, shall be filed by the parties to the combination." (emphasis supplied)

Accordingly, in the event any transaction is considered to be 'inter-connected' with the notifiable 'combination', all such transaction(s) will need to be notified to the CCI in a single application (irrespective of whether such inter-connected transaction(s) individually require CCI approval or qualify for an exemption).

B. The 'ultimate intended effect' test

While there is no formal guidance from the CCI in relation to the meaning of 'inter-connected, its decisional practice indicates that the following factors may be relevant in making this determination:

However, it should be noted that the above list is only indicative of the features that may be considered to satisfy the 'ultimate intended effect' test as specified in Regulation 9(4) of the Combination Regulations, and which was reiterated by the Supreme Court of India in CCI v. Thomas Cook[1] as being determinative of 'inter-connection'. By way of an example, in Adani/ Reliance[2], two transactions which involved common parties, i.e., same acquirer and seller, were held not to be 'inter-connected' (while the reason for this is not clarified, the CCI's order disclosed that the two transactions were based on two separate 'binding documents').

C. Is a 'binding document' necessary for the 'inter-connected' step to be notifiable

Section 6(2) of the Act specifies that the obligation to notify a combination is triggered upon the execution of a binding document in respect of such transaction. However, a recent order passed by the CCI in November 2019 (the "CPPIB/ ReNew Matter")[3] unequivocally states that "an interconnected part of the combination cannot escape notification on the technical pretext that binding agreement has not been entered into for such inter-connected transaction". Here, the combination involved an investment by CPPIB in ReNew Power (the "CPPIB Investment"), and the investment proceeds from the CPPIB Investment were used to finance ReNew's acquisition of Ostro Energy (the "Ostro Acquisition"). No binding document was executed in respect of the Ostro Acquisition at the time of notification (or approval) of the CPPIB Investment.

This appears to be inconsistent with the view expressed by the CCI in a February 2019 order[4], where it acknowledged the 'inter-connected' nature of a transaction; however, since no binding document was executed with respect to such 'inter-connected' step, the CCI directed the acquirer to submit a separate combination notice for this step upon execution of binding document in this regard (a memorandum of understanding was not considered sufficient).

D. Investments in the same target (in tranches or via a common round of fund-raising)

If a single agreement contemplates separate transactions, or there is simultaneity in negotiation, execution and/ or consummation of transactions, such transactions may be considered to be 'inter-connected'. However, this may not necessarily be the case, as was reflected in the fund-raising undertaken by Jio in 2020, by Delhivery and IndiaIdeas in 2019, and by Flipkart in 2017 – in each case, the investors participating in the fund-raise filed separate combination notices with the CCI (where such investments were notifiable). Accordingly, investors need to self-assess their notification requirements on a case-by-case basis, and take into consideration whether their investments are conditional and/ or contingent on the other investments.

There is also some ambiguity in relation to investments undertaken in multiple tranches – for example, the CCI has previously approved first and subsequent tranches of acquisitions, where such subsequent tranche was proposed to be implemented within two years[5] and 5-7 years[6] from the date of closing of the first tranche. However, in a recent order of January 2021[7], the CCI appears to have limited its approval to the first tranche of an acquisition only, and refrained from approving the subsequent tranche(s) which were proposed to be completed within 42 months. The reason for this treatment has not been disclosed in the CCI's order.

Further, the CCI provided a 'qualified' approval in the RJIO/ RCOM[8] matter, where the notified combination related to an acquisition of the right to use certain telecom spectrum, and an additional option to acquire the right to use certain further telecom spectrum. The CCI's approval in this case was limited to the options exercised (and acquisitions completed) within one year of the CCI's order. In this regard, the CCI held that "given the significant uncertainty surrounding the exercise of further option rights, capability of each spectrum acquisition transaction to affect market dynamics and fast changing competition dynamics, the approval of the Commission is subject to the condition that any future acquisition(s) of the spectrum under the RCOM/ RTL Option Agreements not completed within one year from the date of the decision of the Commission would require fresh filing".

Accordingly, the CCI appears to be mindful that market dynamics and economic realities may differ for combinations, and a case-by-case analysis is required in this regard. However, the paucity of publicly available information coupled with the limited disclosures in the CCI orders have obscured the criteria based on which transactions may be considered as 'inter-connected'.

Similarly, past CCI orders do not provide any objective guidance on whether preparatory steps undertaken prior to a notifiable combination (for example, where the seller separates the target business in a separate entity), are 'inter-connected' with such combination. For example, in Advent/ MacRitchie[9], the prior internal restructuring was considered to be independent from the notified combination. On the other hand, in the recent Reliance Retail/ Future Enterprises[10] order, the prior internal restructuring undertaken to consolidate the target businesses into one entity were notified as 'inter-connected' to the Reliance Group's acquisition of the target businesses.

Section 43A of the Act specifies that a penalty of an amount up to "one percent, of the total turnover or the assets, whichever is higher, of such a combination" may be levied in cases of 'gun-jumping', i.e., where the parties consummate whole or part of a combination (including any steps 'inter-connected' thereto) prior to receipt of the CCI approval. In case of an acquisition, the penalty is borne by the acquirer (and in case of a merger, by all merging parties). Accordingly, if approval is not sought for any step which is 'inter-connected' (even if such step is exempt from notification on a standalone basis), it may attract a penalty for 'gun-jumping' (as is reflected in the CPPIB/ ReNew Matter discussed above).

In addition to a penalty, the CCI may also require a (separate) notice to be filed in respect of the 'inter-connected' step, which includes the risk of remedies being imposed post-completion. For example, in the CPPIB/ ReNew Matter, the inter-connected step was finally approved by the CCI on July 10, 2020, that is more than two years after the date of its completion, i.e., March 28, 2018 (in this case no remedies or modifications were required).

Further, the CCI's recent practice has been to require that the entity which is the acquirer for the purposes of the 'inter-connected' step also be added as notifying party. This process involves providing declarations and notarized confidentiality affidavits (where applicable) signed by officials of such party, and disclosing corporate and other information relating to such party in the combination filing, and may lead to long 'clock-stop' periods and impact deal timelines.

The risks of remedies being imposed and/ or delays (as mentioned above) also apply in respect of 'inter-connected' transactions which may be exempt from notification requirements on a standalone basis. Accordingly, it is advisable that parties carefully consider whether any transactions may be considered as 'inter-connected' (including based on agreements and underlying considerations), and where appropriate, seek a pre-filing consultation with the CCI to obtain clarifications in this regard.

Based on the above, it is seen that the CCI's practice (as assessed from our experience and from the limited disclosures available in CCI orders) in respect of 'inter-connected' transactions has not been entirely consistent and remains fairly subjective and ambiguous.

Accordingly, the CCI could consider specifying objective standards or guidance for assessing which transactions qualify as 'inter-connected' - perhaps this could be included in the next revision of the CCI's 'Notes to Form-I'. In the interim, the CCI should provide more disclosures relating to underlying agreements, timing, structure, and conditionality in its orders (subject to reasonable confidentiality requests), as this would be instructive for stakeholders in assessing their notification requirements, and add much-needed clarity to the extant Indian merger control regime.

This insight has been authored by Dhruv Agarwal (Associate) and Ishika Rout (Associate). They can be reached on [email protected] and [email protected] for any questions. This insight is intended only as a general discussion of issues and is not intended for any solicitation of work. It should not be regarded as legal advice and no legal or business decision should be based on its content.

[3] CCI's order under Sections 43A and 44 in CPPIB, ReNew Power/ Ostro Energy, dated November 21, 2019; as available at: https://www.cci.gov.in/sites/default/files/Notice_order_document/OrderPublicVersion.pdf