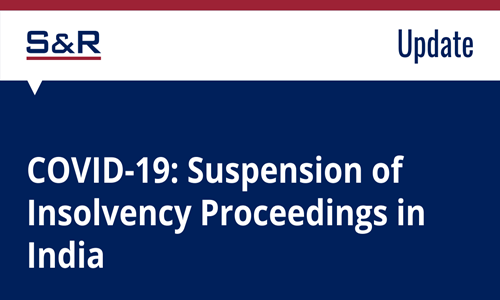 In the light of the economic upheaval on account of the Covid-19 pandemic and the resultant restrictions on economic activity, the Indian Government had proposed suspension of the right to initiate insolvency resolution proceedings under the Insolvency and Bankruptcy Code, 2016 (the "Insolvency Code") for a period of six (6) months. In pursuance, the Indian Government has now introduced the Insolvency and Bankruptcy Code (Amendment) Ordinance, 2020 (the "Insolvency Ordinance"), which became effective on June 5, 2020.

This note sets out a summary of the changes brought in by the Insolvency Ordinance.

However, Section 10A of the Insolvency Code will not be applicable in respect of defaults committed by the corporate debtor prior to March 25, 2020.

2. Suspension of Liability for Wrongful Trading

Under Section 66(2) of the Insolvency Code, during the CIRP of a corporate debtor and upon an application filed by the resolution professional with the relevant National Company Law Tribunal, the directors or partners (in case of a limited liability partnership) of the corporate debtor can be ordered to personally contribute to the corporate debtor's assets if the director or partner knew or ought to have known that there was no reasonable prospect of avoiding CIRP and did not exercise due diligence to minimize potential losses to creditors. The Insolvency Ordinance now inserts sub-section (3) to Section 66 of the Insolvency Code, which prohibits making any applications under Section 66(2) in respect of any default for which initiation of CIRP has been suspended under Section 10A.

In the light of suspension of CIRP applications under Section 10A of the Insolvency Code, lenders, debt investors and borrowers can consider alternative out-of-court enforcement/ restructuring options, such as under the Reserve Bank of India (Prudential Framework for Resolution of Stressed Assets) Directions 2019 and the Securitisation and Reconstruction of Financial Assets and Enforcement of Security Interest Act, 2002, or in-court restructuring through schemes under Sections 230–232 of the Companies Act, 2013.

This update has been authored by Rajat Sethi (Partner), Tanya Aggarwal (Partner) and Srimukundan R. (Associate). They can be reached on rsethi@snrlaw.in, taggarwal@snrlaw.in and srimukundan@snrlaw.in for any questions. This update is intended only as a general discussion of issues and is not intended for any solicitation of work. It should not be regarded as legal advice and no legal or business decision should be based on its content.