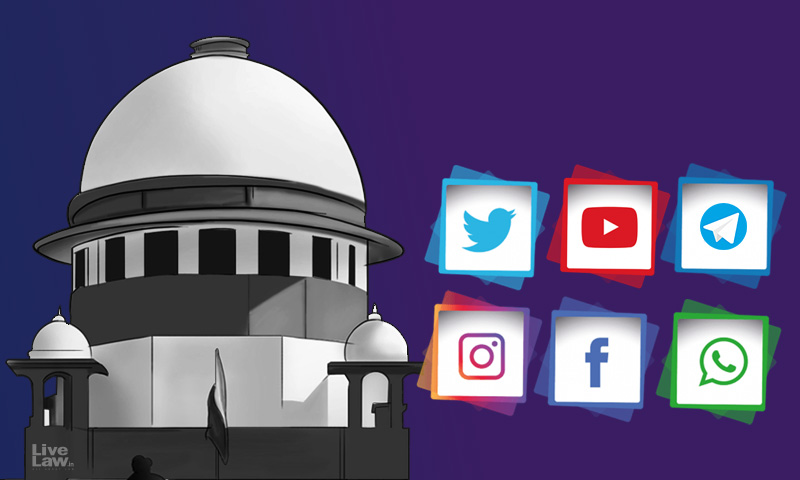 The Supreme Court on Friday issued notice in a writ petition seeking issuance of directions to the Centre for framing rules and regulations or guidelines to govern reporting and broadcasting of any news related to any criminal investigation by police officials on their personal and professional media accounts.The writ petition, filed under Article 32 of the Constitution, contended that...

The Supreme Court on Friday issued notice in a writ petition seeking issuance of directions to the Centre for framing rules and regulations or guidelines to govern reporting and broadcasting of any news related to any criminal investigation by police officials on their personal and professional media accounts.

The writ petition, filed under Article 32 of the Constitution, contended that social media comments by police officers on pending investigations will prejudice fair probe and will amount to interference with administration of justice.

Preferred by Mohammed Khalil, the petition that also sought transfer of investigation into the death of Deepika Kishan Suicide Case to CBI, Delhi.

A bench of Justices AM Khanwilkar and CT Ravikumar considered the petition. The petitioner (Mohammed Khalil) was represented by Senior Advocate Gopal Sankaranarayan.

Deepika Kishan, a resident of Port Blair had committed suicide at her residence. The petition stated that before committing suicide, the deceased had recorded a video (which was later published on the internet) in which she had narrated her entire ordeal and named DGP, Andaman and Nicobar Police, Sub Inspector(s) and one reporter as people responsible for her death.

Arguing that since the main person named by the deceased was the DGP who sits at the helm of the police force of Andaman and Nicobar Islands, no police officer would initiate investigation or register FIR against the DGP and other senior police officers, Khalil in his petition contended that the case was not capable of being properly investigated in a fair and impartial manner by the Andaman and Nicobar Police.

It was alleged that the DGP had posted various "scathing and distasteful tweets" against the deceased and her family from his Twitter social media account. The petition further stated that the DGP continued tarnishing deceased's reputation by publishing prejudicial tweets against her and her family while the investigation in a case where the deceased had allegedly secured a job with ANIIMS (Andaman and Nicobar Islands Institute of Medical Sciences ) through forged and fabricated documents was still ongoing.

It was also stated in the petition that the Calcutta High Court on May 12, 2021 deprecated DGP's conduct and even categorised the tweets as violation of police rules and restrained him from publishing any further tweets.

However by this time DGP along with other co conspirators had tarnished Deceased's reputation and had been harassing and threatening her repeatedly as a result of which the deceased on July 30, 2021 committed suicide to end her ordeal.

Khalil in his petition had also stated that deceased's dying declaration video was published by one Protima Banerjee tagging Prime Minister Narendra Modi and other senior politicians as a result of which the Andaman and Nicobar Police published a tweet which stated that, "any public statement made on the issue may tantamount to interference with Magisterial inquiry."

"Clearly public statements made by DGP against the deceased and her family did not tantamount to interference but where DGP was named in a dying declaration, public statements were to be construed as interference. This tweet of Andaman and Nicobar Police was nothing short of witness tampering and was a veiled threat to witnesses," Khalil averred further in this regard.

It was further averred that as per the reports available with media and on social media, the Andaman and Nicobar Police have now been coercing SI Pankaj Kumar Rai to take the blame of the deceased's death.

The petition had also sought issuance of directions to DGP, Andaman and Nicobar Police to immediately refrain from publishing or broadcasting any information or news related to any criminal investigation on its personal or professional social media accounts.

Relief of commencement of contempt proceedings against DGP and direction to UT of Andaman and Nicobar to initiate proceedings u/s 166A, CrPC and/or Departmental Enquiry against DGP and other concerned police officers for publishing and broadcasting confidential information related to the investigation on their personal and professional accounts was also prayed for.

The petition was filed through Advocate on Record Anjani Kumar Mishra.

Case Title: Mohammed Khalil v Union of India and Others