Power Of Judicial Review: How Supreme Court Caused Changes In Government Decisions in 2021 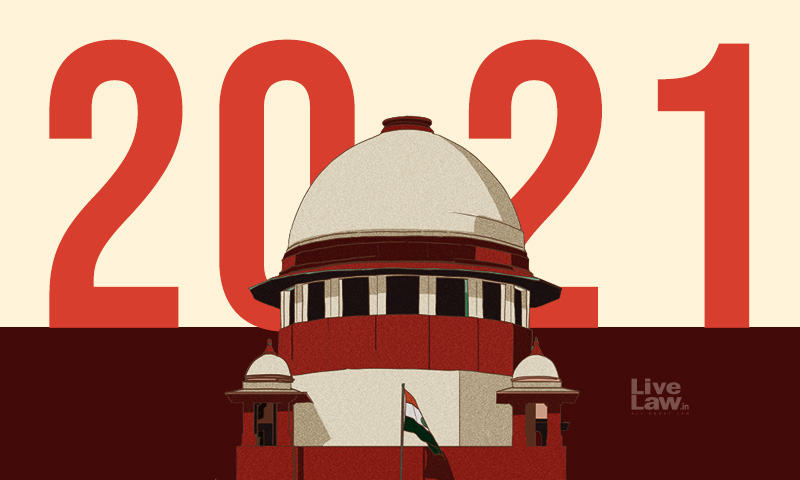 "If the judiciary does not have the power of judicial review, then the functioning of democracy in this country would be unthinkable", said the Chief Justice of India NV Ramana while speaking at a public event recently.The CJI explained that the Constitution has created three co-equal organs, namely the legislature, the executive and the judiciary and the judiciary has been given the role...

"If the judiciary does not have the power of judicial review, then the functioning of democracy in this country would be unthinkable", said the Chief Justice of India NV Ramana while speaking at a public event recently.

The CJI explained that the Constitution has created three co-equal organs, namely the legislature, the executive and the judiciary and the judiciary has been given the role of reviewing the legality of steps taken by the other two organs. To brand "judicial review" as "judicial overreach" is a "misguided generalization", asserted the CJI.

The year 2021 witnessed the Supreme Court asserting its Constitutional role to exercise judicial review over several executive actions. While the Court was careful to not tread into the executive area of policy formulation, it did not hesitate the call out the Constitutional infirmities, wherever they were detected in the executive decisions. And, the Court's interventions bore fruits, as we saw the executive revisiting its decisions, in the light of the critical judicial remarks. Let us have a look at some of them.

The best example for positive judicial review in 2021 is the Central Government deciding to change its COVID vaccination policy after the Supreme Court highlighted several flaws in it.

A bench comprising Justice DY Chandrachud, Justice L Nageswara Rao and Justice S Ravindra Bhat made prima facie observations to the effect that the dual pricing policy for Centre and States and the exclusion of the age group 18-44 years from free vaccines were arbitrary and discriminatory.

In a detailed order passed on April 30, the Supreme Court went to the extent of prima facie saying that the vaccine police was "detrimental to the right to life and health" and that it needs a rethink to "make it conform to the mandate of Articles 14 and 21 of the Constitution of India".

In its May 31 order,  the Court went a few steps ahead of its previous order by asking the Centre to :

(2) Produce before the Court all relevant documents and file notings which led to the policy.

(2) Explain how the budgetary allocation of Rs 35,000 crores was utilized for vaccine procurement and clarify why this amount cannot be utilized for giving free vaccines for the category of 18-44 years.

Rebutting the Centre's argument that the executive policy decision was beyond judicial scrutiny, the Court explained :

"Our Constitution does not envisage courts to be silent spectators when constitutional rights of citizens are infringed by executive policies....Judicial review and soliciting constitutional justification for policies formulated by the executive is an essential function, which the courts are entrusted to perform", the bench said.

"In grappling with the second wave of the pandemic, this Court does not intend to second-guess the wisdom of the executive when it chooses between two competing and efficacious policy measures. However, it continues to exercise jurisdiction to determine if the chosen policy measure conforms to the standards of reasonableness, militates against manifest arbitrariness and protects the right to life of all persons".

On June 7, the Prime Minister announced changes in the vaccine policy, deciding to change the dual pricing policy for centre and states and extending the free vaccination benefit to the age group of 18-44 years - the two major areas of concern flagged by the Court.

For detailed reading : 'Free Vaccines For All' : A Powerful Impact Of Supreme Court's Judicial Review

UP Govt revokes permission to Kanwar Yatra amid COVID after suo motu intervention by the Court
The Uttar Pradesh Government revoked the permission given to hold "Kanwar Yatra" pilgrimage amid COVID threat after the Supreme Court took suo motu cognizance of the issue on the basis of newspaper reports.

The Bench comprising Justices RF Nariman and BR Gavai observed that the State of Uttar Pradesh cannot go ahead with the Kanwar Yatra, especially so when the Union Government has taken a stand against holding the same. "Religious sentiments are subservient to the fundamental right to life and health", the bench observed in its order(case : In Re Alarming Newspaper Report Regarding Kanwar Yatra in State of UP).

The Supreme Court took serious note of the mounting vacancies in various tribunals across the country and passed strong observations to compel the Union Government to expedite the process of filling up of vacancies.

A bench comprising Chief Justice of India NV Ramana, Justice DY Chandrachud and Justice L Nageswara Rao criticized the Central Government for "cherry-picking" the names approved by the Search-cum-Selection Committee and taking names out of the wait-list ignoring the select list. The bench also expressed its unhappiness over the Tribunal Reforms Act 2021, which it said was a "virtual replica of the provisions struck down by the Court".

'You Are Testing The Patience Of Court; No Respect For Our Judgments' : Supreme Court Raps Centre Over Tribunals Reforms Act

Following the rap from the Court, the Central Government notified appointments in tribunals like NCLT and ITAT. The bench also took note of the non-functioning of several DRTs and DRATs in the country due to unfilled vacancies and asked the High Court to entertain writ petitions in relation to bank recovery matters.

The Supreme Court also took a suo motu case to deal with the vacancies in consumer commissions and a bench led by Justice Sanjay Kishan Kaul passed directions to Central and State Governments to complete the appointment process in a time-bound manner.

While hearing a batch of petitions related to NEET-PG counselling, the Supreme Court questioned the rationale of the Rupees 8 lakh annual income limit and other criteria adopted by the Central Government to determine the eligibility for reservation for Economically Weaker Sections(EWS).

The bench's concerns could be summarized as two-fold :

A bench led by Justice DY Chandrachud passed a detailed order recording its doubts over the reasonableness of the EWS limit and raised eight points of specific queries to the Government.

On November 25, the Central Government agreed to revisit the EWS criteria and formed a committee to review the same in light of the Court's observations. ( Latest update: Centre filed an affidavit yesterday stating that it has accepted to retain the existing EWS criteria for the current admissions, based on the recommendation made by the Committee).

For detailed reading :  NEET-PG Counselling : Why Criticism Against Supreme Court Intervention Is Misdirected?

The Supreme Court is actively monitoring the disbursal of the ex-gratia compensation by the State Governments to the kin of those who died due to COVID. The Gujarat Government came under Court's criticism for constituting a scrutiny committee to review compensation applications. Observing that the constitution of the scrutiny committee was contrary to the directions of the Supreme Court judgment, a bench led by Justice MR Shah made strong remarks against the Gujarat Government, after summoning the Principal Secretary and the Health Secretary. Following that, the Gujarat Government made necessary amendments.

'Your Chief Minister Does Not Know Anything?': Supreme Court Raps Gujarat Govt Over COVID Compensation Process

Other states also faced the Court's criticism for the low rate of disbursal of ex-gratia compensation, especially the States of Kerala and Maharashtra.  The Court has passed directions to give wide publicity to the application process in local newspapers and media and has called for periodic reports on the status of disbursal.

The Supreme Court swung to swift action when the air quality level of Delhi-NCR alarmingly plummeted to severe category during mid-November. Prodded by the Court's observations and interventions, the Commission for Air Quality Management took several steps to curb pollution in the national capital. A bench comprising Chief Justice of India NV Ramana, Justice DY Chandrachud and Justice Surya Kant directed to impose a temporary ban on construction activities in Delhi-NCR region. The Court bemoaned the apathy of bureaucrats and called for a scientific approach by the authorities well in advance instead of last-minute ad-hoc measures.

After strong observations made by Supreme Court, the Commission of Air Quality Management in National Capital Region constituted an 'Enforcement Task Force' and 17 Flying Squads to enforce the directions by taking coercive action against defaulting entities.

It is not an exaggeration to say that the investigation in the Lakhimpur Kheri case involving Ashish Mishra, the son of Union Minister and BJP MP Ajay Mishra, would have got derailed had it not been for the timely intervention by the Supreme Court.  A bench led by Chief Justice of India NV Ramana acted on a letter petition seeking a court-monitored probe into the incident of protesting farmers getting killed after being mowed down by vehicles in the convoy of Ashish Mishra.

The Court passed several scathing critical remarks against the UP Police, especially for not arresting the main accused Ajay Mishra. Following the Court's remarks, the police arrested him. The Court continued its monitoring of the investigation in subsequent stages and reconstituted the Special Investigation Team by including senior IPS officers who do not belong to UP. The Court also appointed former P&H High Court judge Justice RK Jain to oversee the SIT probe. The Court had earlier observed that CBI may not be a solution for the case "for reasons best known".

The SIT recently filed a chargesheet against Ashish Mishra and other accused finding the killing of farmers to be a "pre-planned conspiracy".

Direction to permit women to appear for NDA exam

The Supreme Court passed an interim direction to allow women to appear for the entrance examination for National Defence Academy.
A bench led by Justice Sanjay Kishan Kaul disapproved the policy of Defence Ministry against co-education in NDA.
The bench also rejected the Ministry's plea to defer the women entry to January 2023 admissions, observing that the Court cannot "belie the hopes of young girls".
"We will not put this train in reverse gear... we will not set the clock back. A beginning has to be made now. Having given some hope to women that they can take exams in November, we don't want to belie that hope by saying they will have to wait for one more year and then something may happen. Exam cannot be postponed," a bench of justices Sanjay Kishan Kaul and BR Gavai said.
Centre Defers NEET-SS Exam Pattern Changes To 2022-2023 After Supreme Court Rap

Faced with harsh criticism from the Supreme Court over the eleventh-hour changes brought to the NEET-SS 2021 pattern, the Central Government on October 6, 2021 in a petition ( Prateek Rastogi and Others v. National Board of Examination and Others) challenging the changes made to NEET-SS 2021 pattern had told the Court that the revised pattern will be implemented only from next year.

During the hearing, the Supreme Court had questioned the eleventh-hour changes made to the NEET-SS 2021 pattern and asked the Union Government and the National Board of Examinations to "put their house in order" by deciding to defer the implementation of the revisions next year. The bench remarked that the revised patterns give extra privilege to the students from the General Medicine category, putting students from other feeder categories at peril. The bench also wondered if the hurried changes have been brought to ensure that seats in private medical colleges for SS courses are not lying vacant.