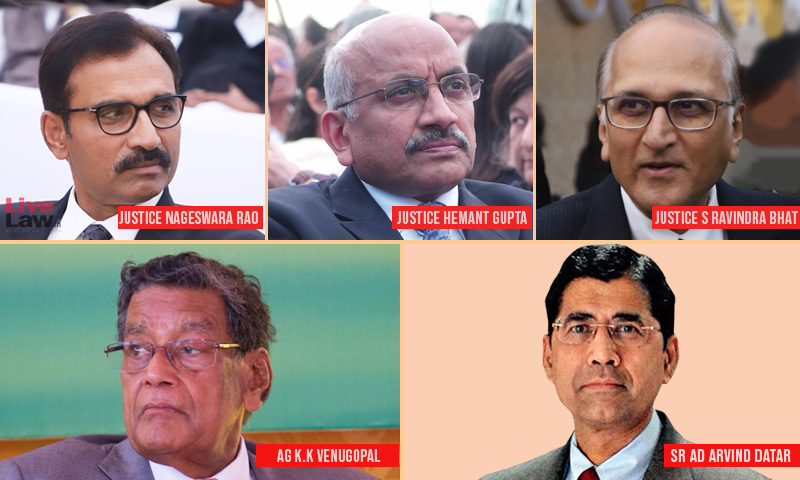 The Supreme Court on Friday, while issuing a slew of directions to the Centre to amend the Tribunal Rules, 2020, directed the Union of India to constitute a National Tribunals Commission to supervise the appointments and functioning of Tribunals. A Bench comprising of Justices L. Nageswara, Hemant Gupta and S. Ravindra Bhat, stated that till the Commission was constituted,...

The Supreme Court on Friday, while issuing a slew of directions to the Centre to amend the Tribunal Rules, 2020, directed the Union of India to constitute a National Tribunals Commission to supervise the appointments and functioning of Tribunals.

A Bench comprising of Justices L. Nageswara, Hemant Gupta and S. Ravindra Bhat, stated that till the Commission was constituted, a separate "tribunals wing" in the Ministry of Finance to "take up, deal with and finalize requirements of all the Tribunals".

It was highlighted in the notable judgement that Tribunals were create to ease the burden of docket explosion and mounting arrears on the Constitutional Courts.

"Specialized Tribunals were set up to meet the exigencies of adjudication of disputes in some branches of law. A constant complaint has been that the Tribunals are not free from Executive control and that they are not perceived to be independent judicial bodies. There is an imperative need to ensure that the Tribunals discharge the judicial functions without any interference of the Executive whether directly or indirectly".

The Attorney General for India, K K Venugopal, also agreed that the constitution of a National Tribunals Commission would provide a solution to the existing problems and ensure the smooth functioning of the Tribunals.

The judgement expresses the Court's repeated directions to the Union of India to set up a single umbrella organization which would be an independent body "to supervise the functioning of the Tribunals and ensure that the independence of the Members of the Tribunals is maintained".

A reference to the first time this was direction was given in the case of L. Chandra Kumar is made by the Apex Court. The 2010 Madras Bar Association judgment as well as the Rojer Mathew v. South Indian Bank Limited have been cited to emphasize the Court's opinion that "an autonomous oversight body should be established for recruitment of members and functioning of the Tribunals".

"This Court was convinced that the performance and functioning of the Members of the Tribunals must be reviewed by the said independent body in the same way as superintendence by the High Courts under Article 235 of the Constitution. By an order dated 07.05.2018, this Court in fact, recommended constitution of a wholly independent agency to oversee the working of the Tribunals".

Noting that the Court had previously acknowledged in Rojer Mathew the need for financial independence of Tribunals and, that a direction had been given to the Ministry of Finance to earmark separate and dedicated funds for the Tribunals from the Consolidated Fund of India, the Justice Rao-headed Bench reiterated the importance of the constitution of an autonomous oversight body for the recruitment and supervision of the Tribunals.

Stating that it was high time that the observations and suggestions made by the Apex Court in this regard were implemented by Union of India, the Supreme Court has directed the Centre to set up a National Tribunals Commission as suggested in its order dated 07.05.2018 at the earliest.

A further direction to set up a separate "tribunals wing" established in the Ministry of Finance, as an interregnum measure, has also been given, which will take up, deal with and finalize requirements of all Tribunals till the Commission is established.

The Court was deciding the writ petitions filed by the Madras Bar Association and other petitioners challenging the Tribunal Rules.

The Madras Bar Association filed the writ petition in the Supreme Court challenging the constitutionality of the 'Tribunal, Appellate Tribunal and other Authorities (Qualifications, Experience and other Conditions of Service of Members) Rules, 2020 ('Tribunal Rules 2020)'.
The Rules were notified by the Central Government in February 2020, exercising powers under Section 184 of the Finance Act 2017, after the Supreme Court set aside the similar rules made in 2017 in the decision Rojer Mathew v. South Indian Bank Ltd delivered on November 13, 2019.
The petitioner contended that the same vices which plagued the 2017 Rules were present in the 2020 Rules as well.