Gujarat Riots-"I Have Not Mentioned About Chief Minister, If You Continue Reading It, Then I Will Have To Deal With It": Kapil Sibal To Mukul Rohatgi 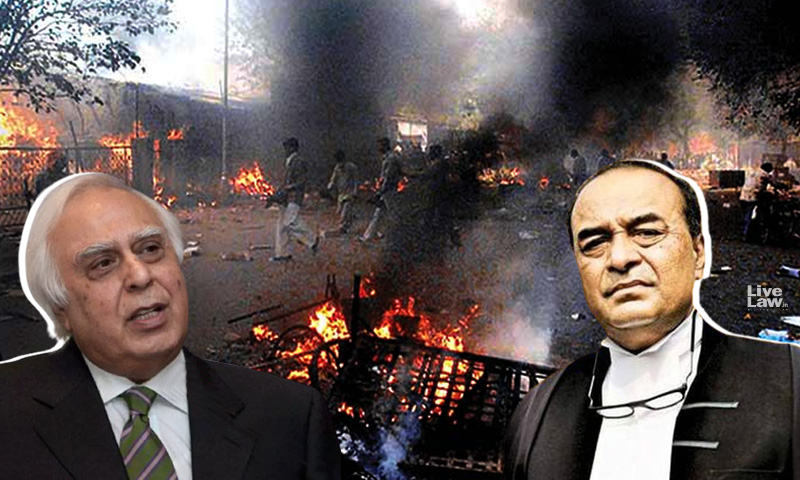 On Thursday, the Supreme Court continued hearing the arguments of Senior Advocate, Mr. Mukul Rohatgi, appearing on behalf of the SIT, countering the plea of Zakia Jafri that, without conducting due investigation the SIT in its closure report had exonerated the highest functionaries of Gujarat from the allegations of conspiracy in the Gujarat riots of 2002.

Mr. Rohatgi continuing with his arguments had referred to the meeting of 27th Feb 2002 at the then Chief Minister's office, which had been categorically left out by Mr. Kapil Sibal, appearing on behalf of the Petitioner when he made his submissions. A Bench comprising Justices AM Khanwilkar, Dinesh Maheshwari and CT Ravikumar enquired if the allegation against the then Chief Minister was being pressed by the Petitioner.

Mr. Rohatgi apprised the Court that though the Petitioner had made serious allegations against the then Chief Minister of Gujarat with respect to delay in requisitioning of the army, after investigation the SIT found out that, on the contrary, the army was called in within the first three hours of the riots. Inferring from the same, he argued that if it was so, then the whole argument of conspiracy would fall flat on its face, for the simple reason, that if someone was indeed conspiring to spread communal violence, they wouldn't have requisitioned the army at the earliest. He submitted -

"If the undue delay is not established, this itself destroys the allegation of a larger conspiracy. If there was a conspiracy of higher officials and political class, the army would not be called in within three hours of the riots. 40 aircraft were used to airlift the army and in addition, six companies of central paramilitary forces were deployed on March 3….The allegation was that A-1 ( the chief minister) gave contrary directions and delayed requisitioning the army. It was a serious allegation but since she (Jafri) has not read it during submissions, we are leaving it."

Interestingly, Mr. Sibal, while making his submissions, had not dealt with the Chief Minister's meeting of 27th Feb 2002, since he believed that no further investigation was required in that regard. Hearing Mr. Rohatgi's argument that the Petitioner had not read the allegations and therefore he would also not indulge in dealing with it, the Bench felt that not reading might not be synonymous with not pressing the allegation or challenging the finding of SIT. It enquired,

"They have not pressed item 1 (allegation against CM)?"

Mr. Rohatgi responded,"The other side has not pressed Item no. 1 of the complaint. I was otherwise willing to read it."

The Bench was of the opinion that maybe the Petitioner did not read the allegation, but would still press it upon further investigation made by SIT on the other allegations. It sought clarification from Mr. Sibal in this regard.

Mr. Sibal clarified that at the moment his submission would be limited to this, that the particular allegation against the then Chief Minister does not need further investigation -

Rephrasing the question, the Bench asked, "So you are not challenging that finding of SIT?"

"It is not pressed for further investigation. If tomorrow any other evidence comes up then, nothing is closed forever...It cannot be closed as any fresh or new evidence can come up as we know what happened in the Delhi riots (1984) cases...I am not challenging the closure report on this finding. I am not seeking further investigation in this matter."

The Bench expressed its desire to record a statement in this regard and Mr. Sibal assured it that he would provide a written statement so that there is no ambiguity.

As Mr. Rohatgi continued reading the allegations against A1(the then Chief Minister), Mr. Sibal interjected, "I have not mentioned A1, if you continue reading about it then I'll have to deal with it."