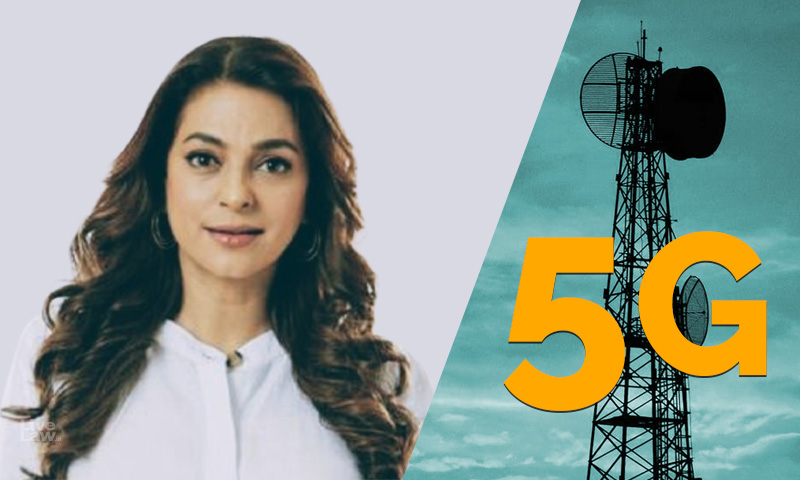 Imposing a heavy cost of Rupees 20 lakhs on actor Juhi Chawla , the Delhi High Court on Friday dismissed her civil suit against 5G Roll out as "defective and not maintainable""Vexatious allegations were made", a single bench of Justice J R Midha noted in the order."It appears suit was filed for publicity. Juhi Chawla circulated link of the hearing on social media", the Court observed in...

Imposing a heavy cost of Rupees 20 lakhs on actor Juhi Chawla , the Delhi High Court on Friday dismissed her civil suit against 5G Roll out as "defective and not maintainable"

"Vexatious allegations were made", a single bench of Justice J R Midha noted in the order.

"It appears suit was filed for publicity. Juhi Chawla circulated link of the hearing on social media", the Court observed in the order.

The Court has also directed issuance of contempt show-cause notice against persons who barged into the virtual hearing and sang songs from Juhi Chawla's films while the hearing was in progress.

"They(plaintiffs) have abused and misused process of law. Plaintiffs are directed to deposit cost of 20 lakhs within one week. DSLSA to utilise it for cause of victims of road accidents. If any proceedings are instituted, this judgement be produced before the court. It appears plaintiffs have filed this suit for publicity, which is clear by the plaintiff 1 sharing links of the hearing on her social media, which lead to multiple disruptions in the hearing", the Court noted in the order.

The Court rejected the prayer made by the plaintiffs' counsel for stay on costs. Justice Midha told the counsel that the matter is already over and that as a counsel he "should know his limits".

The court held that the Plaintiffs' suit was valued at at Rs. 2 crore for jurisdiction, therefore, the valuation had to be the same for Court fee. Over Rs 1 lakh should have been paid. Challenge to the Court Fee Act is not permitted under CPC.

The Court further held that notice under S.80 CPC is a mandatory provision and the Plaintiffs' contention that it is an empty formality is rejected.

The Court also said that the Plaintiffs have failed to make out a case for leave to institute the suit or to sue in representative capacity. Therefore, the plaint is defective and not maintainable.

The Court had on Wednesday reserved its order on applications filed in Bollywood actress and environmentalist Juhi Chawla's suit against the roll-out of 5G telecommunication services in the country. Calling the plaint a "defective plaint", a single Bench of Justice Midha had remarked that suit filed by plaintiffs totally appeared to be a 'Media Publicity Suit'.

The present suit has been filed by Juhi Chawla and others seeking restraints upon the Union Government from taking any steps for the roll-out of 5G telecommunication services in the country, including, but not limited to steps for spectrum allocation, licensing, etc on grounds of long and short term harm to human, animal and plant life and detrimental impact on the environment at large.

Submissions Made By The Counsels During The Hearing : Advocate Deepak Khosla appearing for the plaintiffs submitted that they are not attacking the 5G policy, but attacking its implementation and the 5G roll out in the manner in which it is being done, where on one hand public money is being squandered for conducting study, and on other hand without waiting for studies to be completed, 5G is being implemented.

Mr Khosla had made the submission in response to Senior Counsel Kapil Sibal's argument regarding the launch of 5G being a matter of policy of government.

"I welcome advancements in science and technology but do it right. Do not do it in a manner that some people benefit at the risk of lives and health of others. No where have I said ban government from implementing 5G" Khosla added.

Khosla had also stated that the wrongful act in the present case is the omission of regulatory authorities to discharge their statutory duties and finish studies on which they have squandered money.

"5G roll out actually has not happened but equally damaging, trials involving human population has started. This is not trials on pigs or rats or in empty Thar Dessert, or employees of defendants themselves. These are trial on human population." Khosla said during the hearing.

Advocate Khosla, referring to his first application regarding Court fees, had submitted that due to Covid constraints, partial Court fees has been payed, and asked Court to grant time to comply with the rest.

"We have proposed Court fee of Rs 12210 Rs. However there is a convention that suits coming to Delhi High Court cannot come in below Court fees 2 Lakhs. As far as appropriate amount is concerned in our humble opinion it should be 12210. " Khosla said.

He had added that if amount of Court fee found appropriate by Court is different from Rs 12210, his advice may be preserved where he would pay the Court fee under protest.

Referring to the application filed under Section 80 CPC which required them to serve prior notice and wait for 60 days before filing suit, Khosla stated that it empowers the Court to waive that prior notice. He added that given gravity of the matter the Court may consider waiver of Section 80, considering that State defendants may be heard before granting plaintiffs interim relief that's prayed for.

Advocate Amit Mahajan, appearing for Department of Telecom had submitted that Section 80 is a mandatory compliance, and law says that Court is debarred from entertaining the suit unless there's compliance.

He had added that there is only one exception under the provision, which requires them to file an application, but their application states 'Empty formality of issuance of notice be dispensed with'. Therefore only ground taken by the plaintiffs in their application is that its an 'empty formality' and it does not refer to any urgency at all.

SG Tushar Mehta appearing for Centre had argued that the suit is frivolous, and no cause of action is made out.

In response to SG Mehta's submission that the present case is one of those rare cases where Court may consider exercising power under section 9, the Bench had clarified that it's only taking up the applications filed and is not deciding the case on merits.

Justice Midha had added that the Court was hearing an application for institution of suit, and whether a case for permission wad made out, and once that stage was crossed, the Court would go to merits.

Referring to section 91 of CPC, SG Mehta had stated argued that 'public nuisance or wrongful act' are required under the section, which is not case here as 5G is not prohibited by law, and is permitted subject to conditions.

He had added that mere public nuisance or mere wrongful act, is not capable of being subject matter of suit. It has to be shown to be effecting or likely to effect the public, and that burden lies on public to show how this is wrongful.

Sr Adv Kapil Sibal appearing for some respondents, had submitted that launching of 5G is a matter of policy of Government, and a Government policy can only be set aside if it violates Article 14 or other provisions of Constitution, and that has to be done through a writ proceeding.

Sibal had stated that this suit can only be instituted after establishment of facts, both in terms of public nuisance and a wrongful act, and policy of a state can wrongful unless its set aside.

Referring to application under section 80 CPC, Mr Sibal stated that urgency to seek interim relief is at heart of the provision, the urgency that he demonstrated says that they don't know what impact it has on public at large.

"Neither under 80 can he get this relief without issuing notice to the Union, nor under section 91 can he come to Court espousing the Court of the public without first establishing as a matter of fact that there a wrongful act i.e. this policy itself is unconstitutional." Sibal had said.

He had added that wherever an act causes injury to public pursuant to a fact that stands established, a Section 91 suit will lie. But in the absence of establishment of a fact that the act is wrongful, it can't.