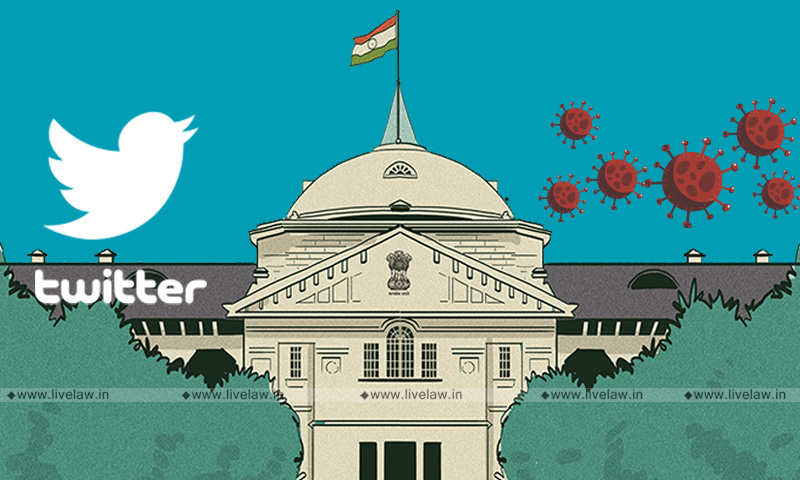 Noting that a vigilant tweet by the resident of a society about breach of the COVID-19 protocol can't constitute a violation of prohibitory orders passed under Section 144 of CrPC, the Allahabad High Court recently quashed criminal proceedings against Man who had tweeted that maids were entering his society without sanitizing their hands etc.

"An information about breach of the CoViD-19 protocol that may, on verification, be found to be wrong, cannot give rise to any offence about furnishing a piece of false information to the Police."

The Court also opined that the impugned charge sheet was vitiated on account of the entire investigation is a sham to the face of the record.

The case against the applicant was that he had tweeted that maid servants and courier boys were entering the society, where he resides, without sanitizing themselves and the maintenance staff were not provided with sanitisers to enable them to do so.

The FIR against him was registered against him under Sections 182, 188 and 271 of the Penal Code.

In the FIR registered against him, it was stated that orders under Section 144 of the Code had been promulgated in the district, looking to the Corona Virus (CoViD-19) pandemic, and the applicant, by his tweet aforesaid had spread a rumour, violating the prohibitory order.

The Magistrate had taken cognizance of the offence and issued summons to the applicant to stand his trial for the offences alleged.

Before the Court, he sought quashing of the impugned FIR submitting that the Police did not undertake any investigation and have filed a charge sheet, doing a mere show of investigation, recording cyclo-styled statements.

It was also argued that the purpose of the tweet was not to create any alarm at large in the town or the district, but to caution the other residents of the society against the impending risk that he had observed.

The State, in their counter-affidavit, said that the information posted by the applicant on his Twitter account was found to be incorrect and that, therefore, the applicant had violated the prohibitory orders promulgated in the district.

At the outset, the Court observed that even if it assumed that the applicant, was wrong in his information carried in the tweet, how would the tweet amount to a rumour that violated prohibitory orders promulgated under Section 144 of the Code in the district, is beyond comprehension.

"Suppression of any breach of the COVID-19 protocol could have devastating consequences, rather than an over zealous misreporting of a fact, even if that stand of the Police were to be believed as true," added the Court.

Further, the Court stressed that the fact that the Police registered that kind of an FIR and then ex-facie did a one-sided, perfunctory and biased investigation mechanically, recording cyclo-styled statements, renders the charge sheet void on its face.

Regarding section 188 of IPC, the Court noted that one can hardly envisage a situation where a tweet about the safety of residents of a society would be construed as an obstruction, annoyance, injury or risk, or of all these to any person lawfully employed.

"To construe the tweet as one within the mischief of Section 188 of the Penal Code would be unacceptable violence to the Statute," added the Court.

Regarding Section 271, the Court said that such a tweet can never be regarded as one within the mischief of Section 271; not even remotely.

Lastly, the Court cautioned the Commissioner of Police, Gautam Buddh Nagar to ensure that frivolous prosecutions are not launched against respectable citizens.

The Court also emphasized that the Trial Court should not permit frivolous cases to survive, burdening its already overloaded docket on one hand, and on the other, resulting in utterly uncalled for harassment of a respectable citizen.

"Cases of this kind ought to be scuttled, whenever and wherever it comes to the notice of a competent court, whether it be at the stage of discharge or in a criminal revision or through an application, asking the proceedings to be quashed," said the Court.

Case title - Tarun Jain v. State of U.P. and Another