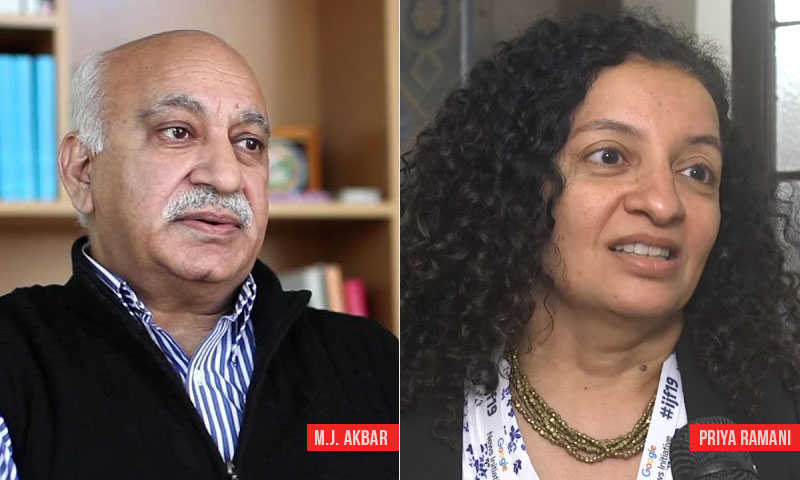 Before the court of Additional Chief Metropolitan Magistrate Ravinder Kumar Pandey, Senior Advocate Geeta Luthra started her final arguments afresh today on behalf of MJ Akbar in his criminal defamation case against journalist Priya Ramani. While addressing the court, Ms Luthra submitted that Priya Ramani's tweets, which were made without any care and caution, tarnished Akbar's...

While addressing the court, Ms Luthra submitted that Priya Ramani's tweets, which were made without any care and caution, tarnished Akbar's reputation as they were widely disseminated in public domain.

While beginning her arguments by saying that for some people, reputation is more important than their life, Ms Luthra submitted that Ramani's Vogue article and subsequent tweets tarnished Akbar's reputation in the eyes of a common man.

'Ramani made per se defamatory statements and too without any research, due care or caution. She didn't even apologise or issue a corrigendum', Ms Luthra argued.

Ms Luthra further argued that Ramani didn't produce any cogent evidence to substantiate her story against Akbar, and hence, failed to discharge her burden under section 105 of the Indian Evidence Act.

After reminding the court of the statements given by the prosecution witnesses supporting Akbar's impeccable reputation, Ms Luthra argued that Ramani's act of publishing and disseminating her story on both media and social media is per se defamatory. She said:

'Calling someone a sexual predator is per se defamatory.'

Throughout the course of her arguments Ms Luthra kept on emphasising on her claim that Ramani made allegations against Akbar without any care and caution. While arguing that courts have set really high standards for establishing care and caution, she contended that:

'Ramani showed extreme carelessness. It's very easy to go to the public domain and tarnish someone's reputation. Look at the expression used! Look at the responsibility or the lack of it in calling someone a predator, without any basis.'

Ms Luthra further cited statements given by prosecution witnesses Veenu Sandal, Jyoitika Basu, and Tapan Chakki to substantiate her claim that the wide circulation of Ramani's tweets and Vogue article damaged Akbar's reputation in this eyes of public and his colleagues.

While claiming that Ramani made her statements deliberately and with a malafide intention to defame Akbar, Ms Luthra contended that:

'You can say whatever you want and can't issue a corrigendum? Ramani's tweets were widely liked and retweeted. Due to social media, her statements got disseminated to a large audience. That's why she should've been more cautious and diligent.'

The court will next take up the matter on December 02.