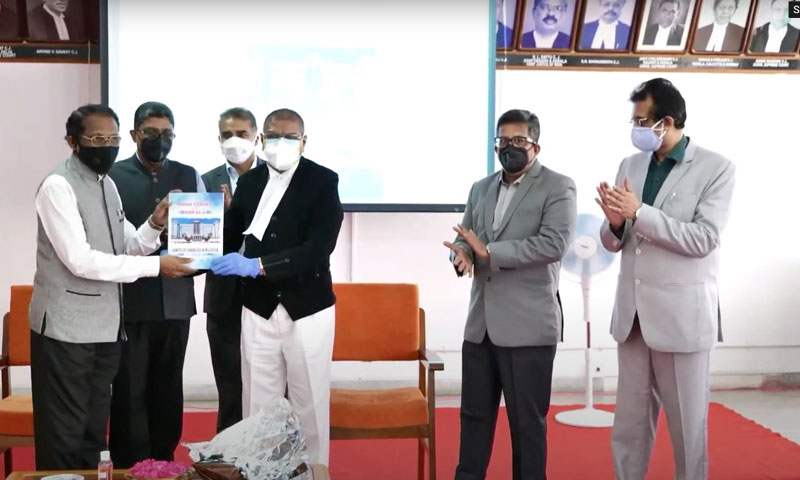 The Kerala High Court on Thursday launched the first edition of its newsletter at 2:00 P.M through a virtual event. Chief Justice of Kerala S. Manikumar launched the newsletter in the event which was also attended by several Judges, Judges of Administrative Committee, and Registrars.

"I am of the firm view that through these E-initiatives and others to come, we will be able to ensure access to justice to all, more expeditiously and efficiently than the yester years and thereby attain the mandates enshrined in the Constitution of India.". said Chief Justice in his message.

"Although the newsletter is limited in the amount of in-depth information, we have made every effort possible to briefly describe the projects implemented and those in process. We have worked hard towards the implementation of these initiatives and upgraded our IT infrastructure to support the new practices. The newsletter provides the data on these implementations along with the statistics of online court work achieved". said Committee Chairman Justice Mustaq in his message.

The Introductory Remark was given by Adv. Shalina Viji Nair (Director, IT, Kerala High Court) where it was declared that the Indian judiciary is going through phenomenal changes through e-initiatives. She mentioned that the vision of such initiatives was to integrate every element of the justice administration.

The newsletter showcases information and communication technology initiatives adopted by the e-committee of the Supreme Court and by the High Court. It was also cited in the Introductory Remark that out of the 44 projects to be implemented in Kerala assigned by Phase 2, 33 were successfully executed as of now.

Apart from the completion of 33 projects which includes video-based Kerala Judicial Academy, VC facility between courts and jails, solar projects, smart phone projects, filing counters, VC equipments, scanning and digitization of records, cloud computing, ICJS, it was also affirmed that many of the remaining projects were at the verge of completion.

While commenting on how the vision of the Computer Committee for complete automation of the justice mechanism became fruitful with the guidance from the Chief Justice, she also stated thus:

Chief Justice S Manikumar unveiled the first edition of Kerala High Court E-Committee Newsletter soon after the inaugural remark. The hard copy of the same was then handed over to Justice C.T Ravikumar by the Chief Justice. The event came to an end with an expression of gratitude for the participants and the audience.