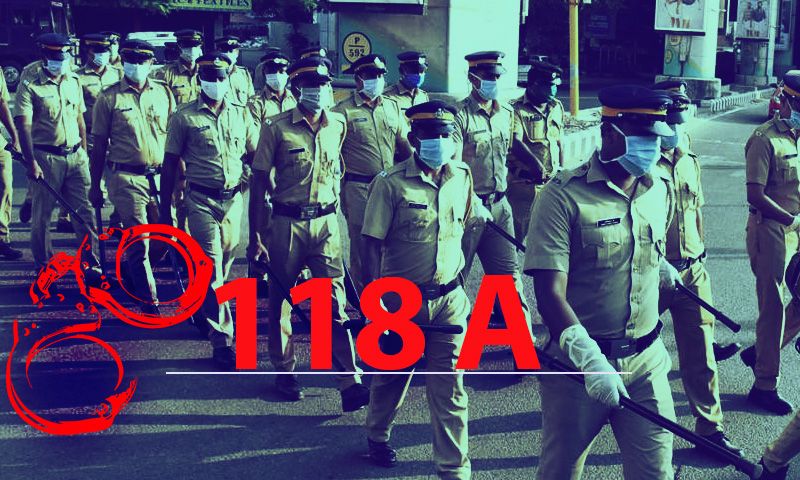 The Kerala Government on Saturday notified the Kerala Police (Amendment) Ordinance, 2020 to incorporate Section 118A in the Kerala Police Act which makes intimidation, defamation, or insulting of any person an offence punishable with imprisonment of term upto Three years and/or upto Rs. 10,000/- fine.

The Governor of Kerala Arif Mohammed Khan has signed the Ordinance.

The provision stipulates either imprisonment for up to three years or a fine of up to Rs 10,000 or both to those who makes, expresses, publishes or disseminates content through any means of communication with an intention to intimidate, insult or defame any person through social media.

The provision reads as under:

"118 A. Punishment for making, expressing, publishing or disseminating any matter which is threatening, abusive, humiliating or defamatory─ Whoever makes, expresses, publishes or disseminates through any kind of mode of communication, any matter or subject for threatening, abusing, humiliating or defaming a person or class of persons, knowing it to be false and that causes injury to the mind, reputation or property of such person or class of persons or any other person in whom they have interest shall on conviction, be punished with imprisonment for a term which may extend to three years or with fine which may extend to ten thousand rupees or with both"

The offence is cognizable and bailable.

Last month, the Kerala cabinet had made this recommendation to the Governor. It had stated in the press release that the ordinance is to ameliorate the concerns about the increasing incidents of crimes perpetrated through social media. The existing laws are found to be insufficient to deal with such crimes, especially after the Supreme Court struck down Section 66A of the Information Technology Act and Section 118(d) of Kerala Police Act, it had said.

Various activists and political parties have been criticizing this move by the Government saying that it would tantamount to curbing free speech.

Pertinently, as per Section 118(d) of the Act [which was later struck down by the Supreme Court] any person who causes annoyance to any person in an indecent manner by statements or verbal or comments or telephone calls or calls of any type or by chasing or sending messages or mails by any means; shall, on conviction be punishable with imprisonment for a term which may extend to three years or with fine not exceeding ten thousand rupees or with both.

In Shreya Singhal judgment, the Supreme Court had held that Section 118(d) violated Article 19(1)(a) of the Constitution of India. The offence of 'causing annoyance in an indecent manner' suffers from the same type of vagueness and overbreadth, the court had observed while striking down this provision as unconstitutional. The court had, however, rejected the challenge against the provision on the ground of legislative incompetence. The penalty created for causing annoyance in an indecent manner in pith and substance would fall within Entry 1 List III which speaks of criminal law and would thus be within the competence of the State Legislature in any case, it had said.