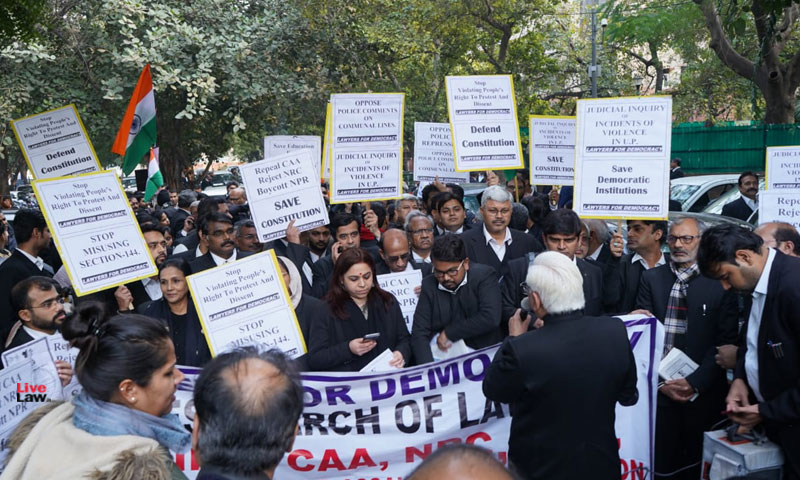 A protest march against the Citizenship Amendment Act 2019 (CAA) was organised on Tuesday under the banner of 'Lawyers for Democracy'. Around 3 PM lawyers, mostly from Supreme Court, started assembling opposite the main gate of the apex court. Around 3.45pm, when a large number of lawyers had gathered, the group began walking from Supreme Court to Jantar Mantar.

The group of lawyers raised their voice in protest by covering this 3km distance while carrying the Indian flag, holding placards invoking Constitutional rights and raising slogans.

Senior advocates including Salman Khurshid, Ashwini Kumar and Sanjay Hegde lent their support to the protest and walked with their colleagues. Upon reaching Jantar Mantar, the sloganeering continued and some lawyers expressed why they felt the need to raise their voices by speaking to various media organisations.

Sanjay Hegde addressed the gathering by invoking the Constitution of India and stating that we live an inclusive country. "We gave ourselves the constitution 70 years ago and it is time to remind the government of the values enshrined in it...As lawyers, we have had to come out in protest against this action."

Salman Khurshid then criticised the government for introducing such a law and said that the people (lawyers, in today's sense) were here to protect the values of India. "We will keep this fight up...It's best that they take our advice and take back this black law", he added before concluding his short address with a slogan of 'Hum honge kamyab' (we shall overcome).

Former Law Minister, Ashwini Kumar also voiced his opinion and said that the legal fraternity today had come together to fight for the soul of India. It is a fight to uphold equality, secularism and the core values of India and its Constitution, he added.

All three of them expressed their pride in the legal fraternity for coming together to make their voices heard.

After the protest culminated in Jantar Mantar, the lawyers stuck around for a short period of time and dispersed peacefully.