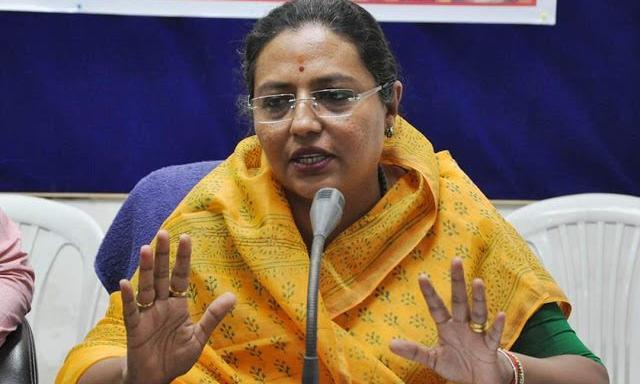 According to the prosecution's case, on 24/­3/­2012 he (the Complainant/Constable) was attached to traffic branch as a police constable, Amravati.

At about 4.15 p.m., one Tata Safari (Yashomati Thakur was present in the vehicle) came from Gadre square and was proceeding from Chuna Bhatti square to Gandhi square (in Amravati).

However, Chuna Bhatti square to Gandhi square was declared as one way and, therefore, the on-duty constable restrained the vehicle and told the driver of the vehicle that they cannot proceed from that road.

Thereafter, Yashomati Thakur got down from the vehicle, held the Complainant's collar and slapped him on his cheek.

She was followed by the driver (Sagar Suresh Khandekar) and other two persons (workers Sharad Kashirav Jawanjal and Raju Kisan Ingle) travelling in the said vehicle and manhandled him and assaulted him (Constable/Complainant).

Subsequently, all these persons proceeded from Chuna Bhatti square to Gandhi square in the said vehicle by violating the traffic rules.

The Complainant immediately informed about the said incident to his superior. Thereafter, he approached police station Rajapeth and lodged the report.

A case was registered under IPC sections 353 (assault on or use of criminal force against a public servant in order to deter him from discharging his duty), 332 (causing hurt to deter public servant from his duty), 186 (obstructing any public servant in discharge of his public functions and 34 (acts done by several persons in furtherance of common intention) against the four.

Sessions Judge, Amravati Urmila S. Joshi Phalke examined five witnesses in the case and one of them, a cop, turned hostile during the trial.

The Court observed that during the cross-examination, it was tried to assert that the exact spot of the incident had not been brought on the record by the prosecution. Also, the barricades were not broken and therefore, the case of the prosecution falsifies.

In this context, the Court remarked,

Further, after going through the entire evidence, it appeared to the Court that evidence of informant P.W.1 (Ulhas Raurale/Complainant/Constable) supported by P.W.2 on material particulars, though, P.W.2 declared hostile, mere declaring of hostile is not sufficient to discard his evidence totally. P.W.3 has also supported regarding the presence of police constable at the spot.

The Court noted that though P.W.2 left loyalty towards prosecution to the extent of the presence of accused no.1. Admittedly, accused no.1 was MLA and that may be a reason for him not to depose against her. But during the cross-examination by learned APP, he admitted Yashomati Thakur's presence.

In this context, the Court opined

"Accused no.1 is a public figure, representative of the public. People elected her. She is also an advocate by profession. She is aware of the legal provisions and the law. The P.W.1 police constable was discharging his official duty. He restrained the vehicle as the road towards the Gandhi chowk was one way. In this situation it was the duty of accused no.1 to follow the rules and regulations." (emphasis supplied)

"It will be the duty of every citizen to respect and citizens cannot be allowed to aggravate the situation by using criminal force against a police constable, who is discharging his official duty to ensure that law and order is maintained."