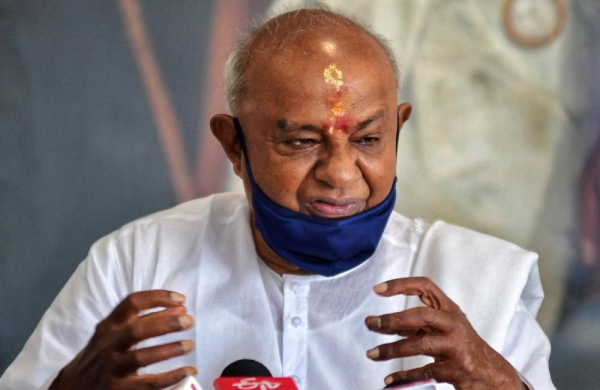 A City Civil and Session Court in Bengaluru has directed former Prime Minister HD Devegowda to pay Rs. 2 crore as damages to the Nandi Infrastructure Corridor Enterprises (NICE) for his "defamatory statement" made against the company in an interview given to a Kannada language news channel. The Court of Additional City and Civil Judge, Mallanagouda, in its order said "The defendant...

A City Civil and Session Court in Bengaluru has directed former Prime Minister HD Devegowda to pay Rs. 2 crore as damages to the Nandi Infrastructure Corridor Enterprises (NICE) for his "defamatory statement" made against the company in an interview given to a Kannada language news channel.

The Court of Additional City and Civil Judge, Mallanagouda, in its order said "The defendant is directed to pay damages of Rs.2,00,00,000 to the plaintiff Company for the loss of reputation of the plaintiff Company on account of the defamatory comments made by the defendant in the interview telecasted in the "Suvarna 24/7" Kannada news channel dated 28.6.2011 under the caption "Gowdara Garjane."

It added "The defendant is permanently restrained from making any defamatory statements against the plaintiff Company in any media, news channel, T.V. channel or in any other means of mass communication in future."

The company had moved the court seeking damages of Rs 10 Crore and permanent injunction restraining Devegowda from making defamatory comments against it in any media or any other means of mass communication.

As per the suit it was stated that on 28.6.2011 at 6:00 p.m., an interview of Devegowda was telecasted on a Kannada Television news channel – Suvarna 24 x 7 under the caption "Gowdara Garjane". In the said interview, Devegowda made unnecessary and slanderous allegations/comments on the Company and also Ashok Kheny (Promoter and Managing Director of the company). The former PM stated that the Company is looting the public money, and that its project is operating on BOOT basis is a 'LOOT project'.

It was submitted that the said interview would give an ordinary watcher and the public an impression that the Company is indulging in mafia activities of 'land grabbing' of the poor farmers and Mr. Ashok Kheny is a notorious 'Don' and that Mr. Ashok Kheny and/or the Company have colluded with certain government officials to indulge in dishonest and corrupt practices and that he is a man without character etc.

Further, it was said the statement made by Devegowda on the television channel interview is totally false, baseless and imaginary and the same is far from the truth. It was also contended that he, being a politician of some stature and having occupied high political offices, has violated all norms of ethics, decency and responsibility and has made highly defamatory comments/allegations against the plaintiff Company and Mr. Ashok Kheny without there being any truth in the matter and without exercising due care and caution needed while making such slanderous and defamatory comments and allegations against the Company and Mr. Ashok Kheny.

Further, it was said "Since the date of telecast of the said interview by the Kannada news channel "Suvarna 24/7", the Executive of the plaintiff Company Mr. Ashok Kheny and his family members have been put to untold mental agony, public shame, humiliation and disgrace. They are highly disturbed and depressed.

Devegowda contended that the suit is not maintainable. As per his written statement, the suit is devoid of merits and liable to be dismissed in limine. It was said "There is a fundamental right of freedom of speech granted by the Constitution of India and any opinion and fair criticism of any individual or organization in its act concerning a public activity or an activity in which members of public have a vital concern cannot be restrained being violative of the right of freedom of speech and expression."

He also argued that "Plaintiff has deliberately with a mala fide intention has failed to disclose that he has been making baseless, scurrilous, untruthful and wild allegations against the defendant and his family members on the same issue which is subject matter of the present litigation and hence, the present suit is nothing but the gross abuse of the process of Court."

Finally it was said "The defendant, as a representative of the public, elected Member of Parliament and a former Prime Minister, has taken up the cause of the poor and downtrodden farmers and land losers. The present suit is nothing but an attempt to gag the voice of truth and social justice and to prevent a public fraud running into Rs.50,000 Crores from being exposed due to educated public awareness. The interview telecasted on 28.6.2011 contained all the truths."

It was also said "The BMICP has been declared as a public project and hence, the citizens – out of whose tax payments the project is being carried have a right to oversee implementation of the project. Merely because the plaintiff Company has been contracted to implement the scheme under BOOT scheme, the same cannot give the plaintiff Company to close all its doors from the public domain."

Firstly the court said "The project being implemented by the plaintiff Company has already adjudged by the Hon'ble High Court of Karnataka and upheld by the Hon'ble Supreme Court of India – which goes to show that the defendant's contention that there are so many illegalities and irregularities in the project undertaken by the plaintiff Company, appears to be incorrect."

The court then went on to say "In the present case, though the project undertaken by the plaintiff Company has been adjudged by the Hon'ble High Court of Karnataka and the Hon'ble Supreme Court of India in which validity of the project has been up held by both the Courts, thereafter the defendant gave an interview to the news channel in which he made certain allegations about the illegalities in the said project and character of the plaintiff Company and its Managing Director. But, when sufficient opportunities were offered by this Court for the defendant to produce evidence regarding the allegations made by him against the plaintiff Company in the interview in question, the defendant has failed to utilize those opportunities and substantiate the statements and comments made by him in the said interview."

On the allegation of defendant that the company utilized more more land than that was required for the project the court said "The allegations made by the defendant against the plaintiff Company about acquiring more land than the land required by the plaintiff Company for implementation of the project, appears to be false and made by the defendant without there being any documentary evidence regarding the same."

Finally the court opined "The project undertaken by the plaintiff Company is a massive project – which is in the larger interest of the State of Karnataka. Hence, if defamatory statements like the present one are allowed to be made in future, definitely implementation of such a massive project like the present one which is undertaken in the larger public interest of the State of Karnataka is going to be delayed. Therefore, this Court feels that it is necessary to curb such statements by issuing a permanent injunction against the defendant."