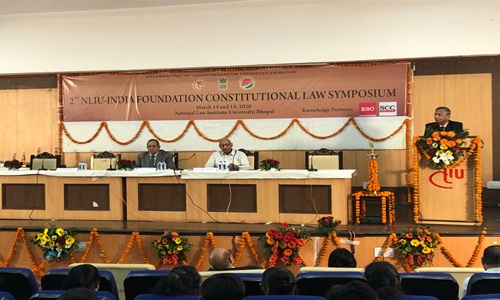 The NLIU-India Foundation Constitutional Law Symposium resumed for the second day on 15th March with Shri OP Rawat, Former Chief Election Commissioner delivering the inaugural address. He spoke about the election system and process, and how EVMs (Electronic Voting Machines) have changed the game and brought in a revolution.

The first plenary session of the day, on 'Sovereignty in the Digital Age', was chaired by Prof. Dr. Ghayur Alam (Dean, Undergraduate Studies, NLIU), with Mr. Vinit Goenka (Secretary, Center for Knowledge Sovereignty), Mrs. Anuradha Shankar (ADGP, Madhya Pradesh Police), and Mr. Bharat Panchal (Chief Risk Officer, FIS Global). Prof. Alam elaborated on the types of sovereignty, and that the implication of the term "digital" is that it cannot be contained by any boundaries. Mr. Goenka spoke about data being used as the final stage of colonization. He gave the example of Google Maps generating revenue without paying the individual responsible for providing them the data or the Government. Instances like these highlight the need of a law to protect the data belonging to the country from entities outside of India. Mrs. Shankar stressed on the terms "deep web" and "meta data", commenting that a national law to protect personal data could hardly solve the complex problem of abuse of data. A more organic framework, better suited to the Indian conditions, is the need of the hour. Mr. Panchal elaborated how the telephone and digital transmission revolutions have changed the face of the earth. There is high data illiteracy in India, as Indians tend to share their information freely. This makes it easy for interlinked organizations like Facebook and MakeMyTrip to transmit data.

The Symposium featured a second plenary session on "Rethinking Parliamentary Democracy", chaired by Dr. V. Vijayakumar (Vice Chancellor, NLIU), with Retd. Justice G Raghuram (Director, National Judicial Academy) and Mr. R Venkatramani (Senior Advocate, Supreme Court). Mr. Venkatramani remarked on the living nature of our Constitution - what it stands as today is a "judicially crafted Constitution" rather than a "legislatively drafted Constitution. While local elections happen on the basis of trust in the candidate, there is a paradigm shift when it comes to parliamentary elections. With respect to parliamentary democracy, what happens inside the Parliament is only 1/3 of the Constitution, the remaining 2/3 happens outside. Justice Raghuram stressed upon the indispensability of rule of law in the algorithm of democracy. The main safeguard of democracy is the judiciary, which must only interfere when necessary. However, once the judiciary "tastes the blood of the executive", it cannot get over it. He touched upon the process of selection of the judiciary – "every time we have a software problem, we come up with a hardware solution". He insisted that the problem does not lie with the institutions, but with the people themselves.