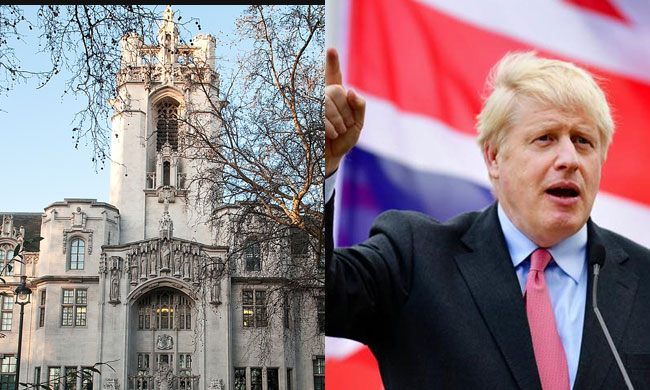 A decision will be unlawful if it frustrates the ability of the Parliament to carry out its constitutional functions", the Court held.

In a historic decision, the United Kingdom Supreme Court has unanimously declared the prorogation of UK Parliament by Boris Johnson to be unlawful and void.

Lady Hale, who presided the 11 judge bench, read out the judgment.

The Court rejected the argument by the Government that the decision to prorogue the Parliament was not justiciable.

"By ensuring that the Government does not use the power of prorogation unlawfully with the effect of preventing Parliament from carrying out its proper functions, the court will be giving effect to the separation of powers.", it said.

"The power to prorogue is limited. A decision will be unlawful if it frustrates the ability of the Parliament to carry out its constitutional functions", the Court held.

"There is non need for the Court to consider whether Prime Minister's motive or purpose, if the prorogation is unlawful. This prorogation has prevented Parliament from sitting for five weeks. That is different from a recess. This prolonged suspension took place in exceptional circumstances. There is no explanation before the Court why it was necessary to suspend the Parliament for five weeks. We are bound to conclude that the decision was unlawful", Lady Hale read out the summary of the conclusion.

The Court held that the prorogation has not taken effect, and that the Parliament has not been suspended. The Speaker will decide on the next course of action.

"It follows that Parliament has not been prorogued and that this court shouldmake declarations to that effect. We have been told by counsel for the Prime Minister that he will "take all necessary steps to comply with the terms of any declaration made by the court" and we expect him to do so. However, it appears to us that, as Parliament is not prorogued, it is for Parliament to decide what to do next. There is no need for Parliament to be recalled under the Meeting of Parliament Act 1797. Nor has Parliament voted to adjourn or go into recess. Unless there is some Parliamentary rule to the contrary of which we are unaware, the Speaker of the House of Commons and the Lord Speaker can take immediate steps to enable each House to meet as soon as possible to decide upon a way forward. That would, of course, be a proceeding in Parliament which could not be called in question in this or any other court".

Judgment has been handed down this morning in the case of 'R (on behalf of Miller) v The Prime Minister' and 'Cherry and others v Advocate General for Scotland' https://t.co/yo4BzgEvdE pic.twitter.com/Itok4hmKb5

It was on September 19 that the 11-judge bench of the UK SC reserved judgment in two cases, which arise out of the top courts of England and Scotland., after holding three days of consecutive hearing from September 16.

The case has highly politically stakes, and its verdict will have substantial impact on the fate of the current government. The opposition allege that Boris Johnson suspended the Parliament to block discussions on his move to get a no-deal Brexit bill passed by October 31.

The decision to prorogue Parliament from September 9 to October 14 was announced by the PM on August 28. This was challenged before the highest courts of England and Scotland, which were also promptly heard and decided.

The High Court of London dismissed the challenge, holding that prorogation of Parliament was not a matter for judicial review. Taking a different view, the highest court of Scotland declared the prorogation to be unlawful, allowing a petition filed by a group of parliamentarians. The Scotland Court held that the suspension "had the purpose of stymying Parliament."

Appeals were filed against both the decisions in the Supreme Court, which decided to hold a special hearing from September 17 to 19. Lady Hale, the presiding judge, said that the appeals had to be heard on a short notice for "obvious reasons".