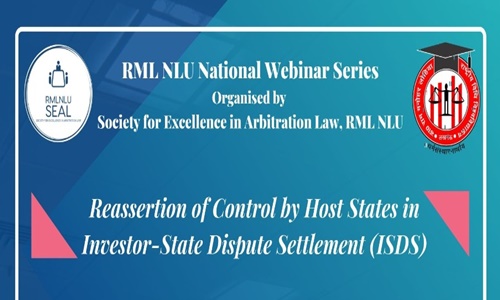 The Society for excellence in Arbitration law, RMLNLU is organizing a webinar on Reassertion of Control by Host States in Investor-State Dispute Settlement (ISDS).

The ISDS regime which was initially designed to create a balance between the rights of the investors and the regulatory rights of the host states has now become a center of controversy. As a consequence, it is seen that states frequently bypass the regime.

This webinar intends to conduct an interactive session which would revolve around procedural and substantive methods by which states, do or may reassert their control over the interpretation and application of investment treaties. Further, it would also engage in analysing India's protectionist outlook and will be followed by a Q&A session.

· Mr. Ben Giaretta: He is a counsel, arbitrator and mediator, specialising in international dispute resolution. He has worked on disputes in many different countries, across Europe, the Americas, Africa and the Asia-Pacific region. He is currently based in London as a partner at Mishcon de Reya LLP. He is on the panel of arbitrators of many arbitral institutions including the SCCA, the SIAC, the HKIAC, the AIAC, the JCAA, the BANI and the KCAB, and has been sole arbitrator, party nominated arbitrator, presiding arbitrator and emergency arbitrator, in many arbitrations.

· Mr. Harshad Pathak: He is a senior associate with P&A Law Offices. He is an Indian qualified lawyer with commercial arbitration, investment treaty arbitration, and civil litigation as his core practice areas. He is an alumnus of the Geneva LL.M. in International Dispute Settlement (MIDS) and the National Law University, Delhi.

· Mr. Nakul Dewan: He is a Senior Advocate & Barrister at Twenty Street Essex and practises from Singapore, Delhi and London. He specialises in disputes and international law advice relating to banking and finance, construction and engineering, corporate (joint venture/shareholder/partnership disputes), international commercial law (including media and telecommunications), mining, energy and natural resources. He has acted both as counsel, for international arbitration and international litigation, and as arbitrator. He has been appointed as arbitrator by the SIAC, ICC and LCIA, and also ad hoc appointments.

· The chief patron for the session will be Prof. Subir K. Bhatnagar (Hon'ble Vice-Chancellor, RMLNLU, Lucknow), and Dr. Prasenjit Kundu (Assistant professor of Law, RMLNLU, Lucknow) will be presiding over as Programme Co-ordinator.

· Moderator: Ms. Rashika Bajpai. She is a graduate from RMLNLU (Batch of 2020) and an incoming associate at Trilegal.

· The webinar can be attended by anyone who is interested in the topic and e-certificates shall be provided to the registered participants on successfully attending the webinar and filling in the feedback form provided at the end of the session.

For any query, email at events.sealrmlnlu@gmail.com