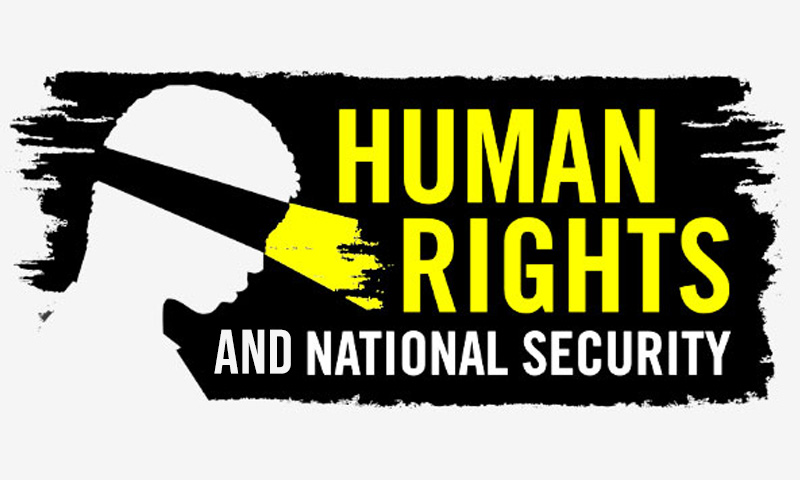 One of the foundational precepts that embody the Universal Declaration of Human Rights ratiocinated that 'in the exercise of his rights and freedoms, everyone shall be subject only to such limitations as are determined by law…'[1] It is, however, a pertinent predilection of the courts in the various jurisdictions around the world that fundamental rights when placed...

One of the foundational precepts that embody the Universal Declaration of Human Rights ratiocinated that 'in the exercise of his rights and freedoms, everyone shall be subject only to such limitations as are determined by law…'[1] It is, however, a pertinent predilection of the courts in the various jurisdictions around the world that fundamental rights when placed against national security and interests are relegated to an inferior proposition, and the above-dictum gets remodelled into- 'in the exercise of national security everyone shall be subject to such rights as are determined by the state'.

Traditionally, in the name of national security, it has been the case that the courts have shown their proclivity to lean on the side of the state when matters pertaining to it are brought for consideration. In India as well, the Central Government has discovered its own penchant to sporadically exploit this mind-set. One cannot forget the trenchant dissenting words of Lord Atkin about the majority decision in Liveridge v. Anderson, (1941) UKHL 1. He says that when it comes to national security, the courts become 'more executive minded than the executive'.

Taking the discussion to the Indian context the approach has been more or less the same that befit the precise description of Lord Atkin. As the Supreme Court of India recently pronounced that the government cannot get a free pass when the 'spectre of national security' isinvoked, it is imperative to look into the precedents set by the court that it seeks to demolish. Here are few examples. In the Naga People's Movement of Human Rights v. Union of India, (1998) 2 SCC 109, the validity of the draconian provisions of the AFSPA were upheld by Supreme Court of India without even stating any reference to the principles of equality, liberty and life enshrined in the Constitution, moreover, the Delhi High Court chose to call it as a 'social imperative' that shall take precedence, all this in the name of the national security. The Kartar Singh v. State of Punjab, (1994) 3 SCC 569, case that challenged the validity of TADA also met with the same fate and got a stamp of constitutional approval from the final interpreter of the Constitution and the guardian of fundamental rights even when applied to ordinary criminals tax evasions matters included[2]. Looking from the lenses of previous decisions handed down by the courts, it is nearly correct to say that the Central Government have had a hundred per cent strike rate in coaxing the court into believing that national security trumps fundamental rights, and the same has been answered in the affirmative.

It has been a sorry state of affairs for fundamental rights in the courts when the word national security is uttered by the government like in the Rafael, Bhima- Koregaon and Rohingya Refugee matters. The court's dilettante disposition for fundamentals rights is quite conspicuously reflected by its own line of decisions. This being a persistent notoriety of the courts in India, it is time- warranted that the Supreme Court needs to find the correct opportunity to rectify the judicial alacrity to uphold provisions of law highly repugnant to fundamental rights when place against national security concerns and craft a balancing approach whereby fundamentals rights and the security of the state both can peacefully co-exist. A constitutional imperative waits for the Supreme Court to look at the current controversy from a fresh perspective of the recently evolving jurisprudence of Doctrine of Proportionality and set a new long-lasting settling precedent.

What Is The Doctrine Of Proportionality?

This doctrine emanates from the two key elements of a constitutional structure i.e. rule of law and democracy. Democracy entails rights and liberties, and on the other hand the rule of law empowers the state to sanction limitation on them to maintain the rule of law and order. But, however, according to a proportionality tool that is derived from this doctrine.

In the simplest of terms, this doctrine means that the ambit of limitation on any right must be proportional to the purpose/objective sought to be achieved through the limiting law. It ensures that the encroachment on any right is not disproportionate to the objective of the law. This doctrine is meticulously defined by Arhon Barak, Former President of the Supreme Court of Israel, in his book titled "Proportionality: Constitutional Rights and their Limitation"[3] where he proposes that the central philosophy that governs the proportionality doctrine is to shield the individual and his/her rights from the arbitrary brute power of the state, and conceives of the proportionality doctrine as having four components- namely- proper purpose, rationale connection, necessity and balancing. Where the chief focus of proper purpose is to look at the purpose for which the limitation on rights is brought, meaning that in a given constitutional setup the legislative intended purpose is rational or not. Similarly, rationale connection focuses on means and ends of the limitation, necessity component focuses on the appropriate requirement of a particular set of limitations, whether or not such degree of limitation required for the purpose intended. The last component balancing is the core of it, also known as 'the proportional result', as it looks into the overall harm/injury caused to rights, and what is actually gained out of such harm/injury.

These components are put to test the proportionality of the limiting law placed by the legislature. Therefore, the proportionality tests leads to a value decision that faces the question that to what extent the violate human rights in the name of the national interest and national security are permissible; when does it vitiate the proper balancing point. Another leading theorist on Proportionality, Robert Alexy,[4] emphasise on the need of a correct balance between the important competing interests. Kai Moller basis proportionality as autonomy- based theory and equates it as the 'global model of constitutional rights'.[5]

For instance, if for the purpose of national security a bill is legislated and made into law stating that the lower court is the final decision authority and no further appeal therefrom can made to any higher courts or that once an arrest warrant is issue no court may grant bail to the accused or the arrest/detention made in the pursuance of the objective of national security cannot be questioned in any court on any ground, in effect, no writ of habeas corpus may lie for the purpose of national security. In all these instances, one thing that comes out clear is the disproportionate and irrational limitation placed on the right to life and liberty. It no is doubt that national security is an imperative; however, where the degree of limitation is not proportional, whatsoever the purpose may be, these instances prove that in a democratic setup the permissible degree of limitation is breached. Therefore, this doctrine means to promote the view-point that any limitation on the fundamental right of an individual shall correspond to the objective sought by such limitation proportionally. The words of Lord Diplock, in R. v. Goldsmith, (1983) 1 WLR 15, are to be remembered that 'you must not steam hammer to crack a nut if a nut cracker will do'.

This doctrine is, however, not embryonic, the Supreme Court has admitted that the seeds of this doctrine are inherent in our constitutional structure (observation made in Om Prakash, (2001) 2 SCC 386) and the court has well adopted it while deciding various case like G. Ganayutham, (1997) 7 SCC 463, Ranjit Thakur, (1987) 4 SCC 611. The articulation of the doctrine by Barak was explicitly accepted by the Supreme Court in Modern Dental College and Research Centre, (2016) 7 SCC 353, and thereafter applied in Jeeja Ghosh, (2016) 7 SCC 761, Privacy case(Puttuswamy, (2017) 10 SCC 1), and most recently applied in Cyrpto- Currencycase (Internet and Mobile Association, 2020 SCC OnLine SC275).

In Modern Dental College and Research Centre, the Supreme Court designed four- part proportionality test that are- (i) that the measure is designated for a proper purpose (ii) that the measures are rationally connected to the fulfilment of the purpose (iii) that there are no alternative less invasive measures, and (iv) that there is a proper relation between the importance of achieving the aim and the importance of limiting the right. The rising acceptance and utilisation of the Doctrine of Proportionality by the Supreme Court is affirmed by its decision in the Crypto- Currency case wherein the circular banning the usage of virtual currency by the RBI was held to be disproportionate and was set aside as it failed to pass the muster of proportionality. In other words, the sole consideration in deciding the case was pertaining to its proportional nature meaning that whether the circular by the RBI encroached or limited the enjoyment of a right fulfilled proportionality requirement as laid down in Modern Dental College and Research Centre.

The Present And Future Of National Security Argument

When the spectre of national security is raised, the words of James Madison shall be remembered as gospel truth. He iterated- "If men were angels, no government would be necessary. If angels were to govern men, neither external nor internal controls on government would be necessary. In framing a government which is to be administered by men over men, the great difficulty lies in this; you must first enable the government to control the governed; and in the next place oblige it to control itself. A dependence on the people is, no doubt, the primary control on the government; but experience has taught mankind the necessity of auxiliary precautions."[6] Therefore, it is submitted that national Security is no doubt an imperative. The question, therefore, is not how to compare the importance of national security to the importance of the sanctity of life; rather, what is the social importance in the marginal contribution to national security (as a result of such law) as compared with the social importance of the marginal harm caused to the constitutional right to life because of it.

The ever expanding ambit of Article 21 with now right to privacy included in present time makes it incumbent on the courts to call a spade a spade and eschew for becoming an executive minded court. The national security claims of the government have to be measured on a strict judicial yardstick of proportionality. The constant berating and impingement of fundamental rights in the name of national security has impaired the vital nature of constitutionally guaranteed rights i.e. safeguard against arbitrary force of the state. A clear framework needs to be adopted by the court so as to determine the fine contours of legitimate limitations on individual rights and liberties. The future of the anachronistic argument of national security, in context of the Doctrine of Proportionality, can be summed in the words of Barak from his book (supra, at page 224) that 'the basic tenets including the notion that the cause may not always justify the means; that national security is not always paramount; and that the proper purpose of raising the level of national security may not justify a substantial injury'.

The author is an Advocate and views are personal.