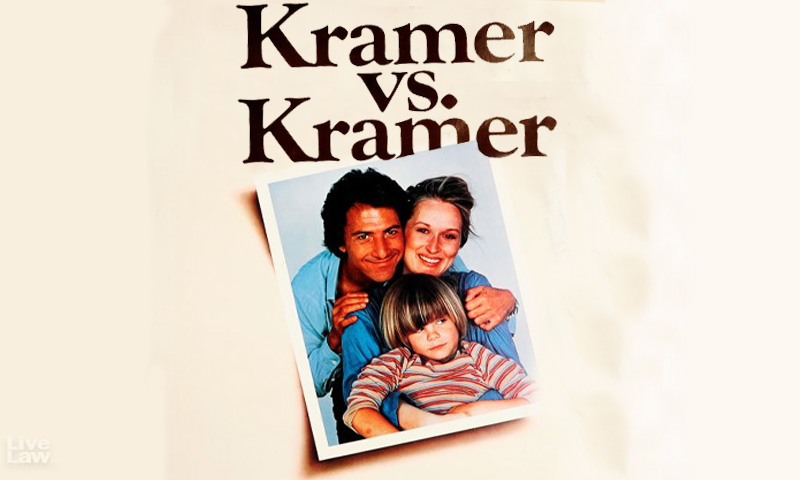 " Dear Billy, sometimes in the world daddies leave and mommies have to raise their little boys but sometimes mommies leave too, and daddies have to bring up their little boys" These heart wrenching words are from the Dear John letter which Joanna Krammer writes to her five-year-old son Billy whom she chooses to abandon. Krammer v. Krammer is a 1979 classic legal drama film directed...

These heart wrenching words are from the Dear John letter which Joanna Krammer writes to her five-year-old son Billy whom she chooses to abandon. Krammer v. Krammer is a 1979 classic legal drama film directed by Robert Benton starring Meryl Streep and Dustin Hoffman in lead roles. The film follows the story of a broken-up couple Ted and Joanna Krammer and the subsequent tussle that ensues for the custody of their son. The film explores the complexities of marriage, divorce and the impact it has on children. The film opens with Joanna Krammer (played by Streep) tucking in her son Billy at night, minutes before she tells her husband Ted (played by Hoffman) that she is going to leave the house and much to the dismay of Ted and Billy, she does leave. Ted brushes off the entire episode as just another fight and seems more worried about his impending presentation at work. He even jokes with his boss that Joanna's " women's lib" friend must have encouraged her to leave the house.

Slowly, Ted realises the seriousness of the situation and struggles with taking care of his five-year-old son which is best captured in a scene where he can't even manage to cook a French toast for his kid and has a breakdown in the kitchen but he adapts quickly, he learns to mold his life according to the needs of his son. During the initial few snippets of the film, Ted is portrayed to be an enterprising young man who uses "putting food on the table " as an excuse for neglecting his marriage and family but as the movie progresses Ted consciously chooses to disinvest from his work to fulfil his responsibilities towards Billy who is a delightful kid who misses his mother and is too young to even make sense of the situation, in fact he blames himself for his mother's abandonment but Ted tackles that beautifully tell his son that his mother left the house because he tried to box her into the role of a perfect wife but she was much more than that and yet she tried hard and stayed longer than she wanted to just because of the pure love she felt towards her son.

As the trial for custody commences, apart from the obvious mudslinging employed by the respective lawyers of the Krammers in the court room, the subtext is that there are no losers or winners in a custody battle. Joanna, Ted, and Billy are all victims in their own right. The film gives us a comprehensive view into the intricacies of a divorce, it is not just limited to the discord which ensues in the courtroom but the dynamics which precede the irretrievable breakdown of a marriage.

It is quite apparent that Joanna and Ted want to be civil to each other but the tribulations of an adversarial system force them to drive bargains with their sense of propriety. Judges need to take into account that there is something about custody adjudication which separates it from other forms of decision making mainly because in custody matters judges have to make an order with respect to the future on the basis of present conduct unlike other matters where decisions have to be made in the present for the conduct in the past.

The film also boldly discusses the issue of a gendered view of parenting, it casts aspersions on the effectiveness of the tender years' presumption which leans in favour of the mother as the custodial parent, the film in a way coaxes the family courts to discard the presumption in cases where the father has played a commendable role in nurturing his child. It forces us to think that nurturing has nothing to do with the sex of the parent and the maternal instinct is not in the exclusive possession of the mother. It also dexterously showcases the gendered expectations our society and invariably our justice system thrusts upon the parents which is unfolded through Ted Krammer's eyes which express a debilitating fear of losing the custody of his child when he learns that he is getting fired from his job and how he will not even begin the to fit the criteria of a suitable father.

Perhaps the best thing about the film is that it does not pass any judgements on Joanna 's choices as a woman, in an emotionally loaded scene she says that neither he nor her child should be punished for her wanting to leave a marriage which was lowering her self-esteem and the fact that she needed time and energy to herself to become a whole human being. That scene has a deeper meaning. More often than not the courts very pompously cite the "best interest of the child" as the paramount basis for deciding a custody matter and the parent's wishes and their rights as individuals take a backseat but the real question is can the best interest of a child be attained if the parents are not given a chance to explore the sides of their own personality.

In one of the last bits of the film, Ted's lawyers says that Joanna has no good reason to leave her husband because he has never hit her, cheated on her and he is not an alcoholic but that was the 70s and the divorce by mutual consent theory had recently set the foot in the door and things have changed since but the fact the film is still a more or less accurate description of what goes on in a custody dispute, is a testimony to the fact that many things haven't changed, despite the painstaking efforts of mediation and conciliation, our justice system still continues to treat custody decision making as an illusory zero- sum game where children continue to bear the brunt of being split into two.

The Author is pursuing LL.M. at NLU, Delhi

(This is the twenty-second article in the "Law On Reels" series, which explores legal themes in movies)