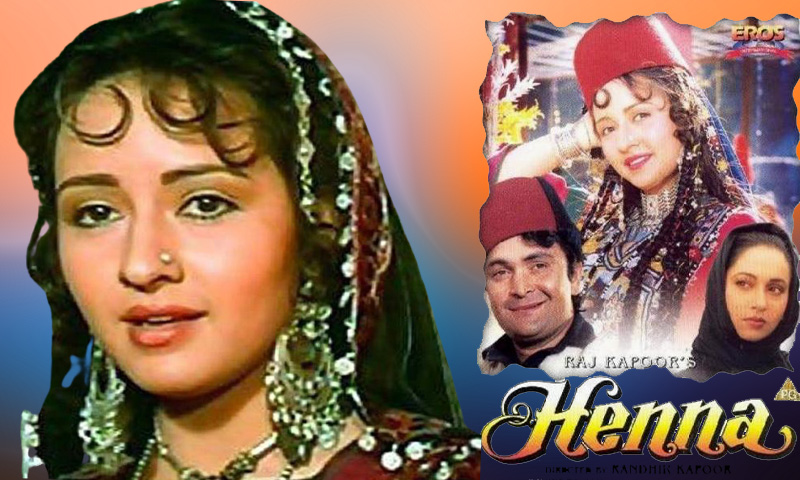 x
" As we observe the 33rd Death Anniversary of the legendary filmmaker Raj Kapoor this week, a look at his unfinished magnum opus - Henna (1991) - through the lens of law and constitution"

(In 1987, the then President of India Shri R. Venkatraman took the unusual step (literally) of walking down from the podium and personally bestowing the prestigious Dadasaheb Phalke Award citation to the ailing cinematic thespian Raj Kapoor, who disregarding medical advice, travelled to Delhi from Bombay to receive this award - the highest official recognition that anyone in the Indian...

(In 1987, the then President of India Shri R. Venkatraman took the unusual step (literally) of walking down from the podium and personally bestowing the prestigious Dadasaheb Phalke Award citation to the ailing cinematic thespian Raj Kapoor, who disregarding medical advice, travelled to Delhi from Bombay to receive this award - the highest official recognition that anyone in the Indian Film Industry can hope to achieve. He collapsed right after the function, was admitted to AIIMS and passed away a month later. Only his mortal remains could make the last trip back to Bombay. 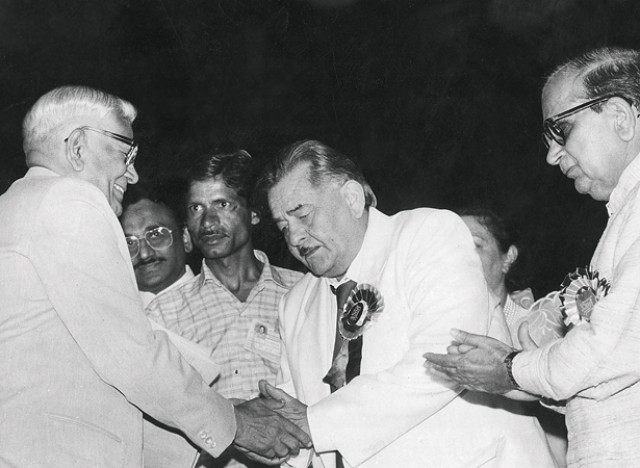 Raj Kapoor receiving the Phalke award from president of India

Raj Kapoor was born in Qissa Khwani Bazaar in Peshawar, then British India and present day Pakistan (in a remarkable co-incidence, a stone's throw away from house of another cinematic legend and his lifelong competitor and contemporary - Dilip Kumar). He was precociously talented, not merely as an actor but in the diverse arts of filmmaking. In a directorial career spanning more than 4 decades from 'Aag' (1948) till 'Ram Teri Ganga Maili' (1985), his films, curated and crafted under the iconic 'RK Films and Studios' Banner achieved the enviable task of pleasing the critics and satisfying the masses. 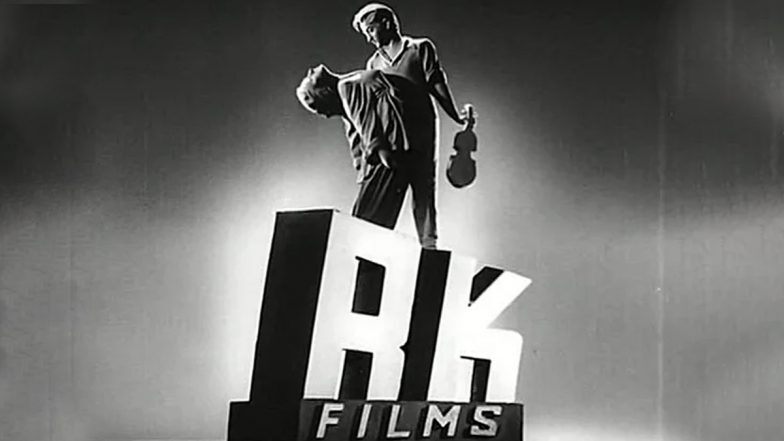 When he passed away, he was working on a his 'dream project'. An Indo-Pak cross border love story, which was ultimately completed by his sons with his eldest son Randhir Kapoor helming the directorial reins, middle son Rishi Kapoor as the lead actor, youngest Rajiv Kapoor handling production, with brother Shammi Kapoor as the introductory voice.

The Plot : Rishi Kapoor ('Chander Prakash' ) presumably a Kashmiri Pandit, runs a timber factory in Baramulla, North Kashmir and is in love with Chandni aka Chand, a resident of Srinagar. Those were the good old days where it would not be a massive surprise (as it is today) to find a successful Kashmiri Pandit businessman in the Kashmir Valley. Whatever may have been his virtues, punctuality wasn't one of them. In a mad rush to make it on time for his engagement function from Baramulla to Srinagar, Chander's car meets with a fatal accident, plunges into a gorge and right into the Jhelum river which carries him across the "Border" to Pakistan, where he is rescued by a nomadic gypsy tribe, whose kindly folks save his life and nurture him back to health. 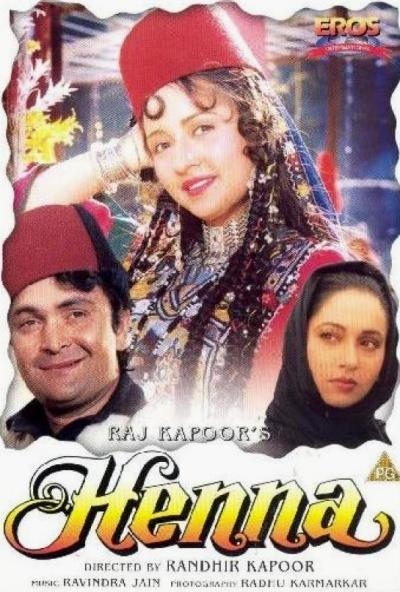 Once he regains his consciousness, he realises that he has "lost" his memory. Now those were pre-Aadhar Card days, No Instagram, No Twitter - so no way of finding out the real identity of their mysterious uninvited guest. So the Village folks do what village people would do in Bollywood Universe – sing a few songs in general merriment till such a time that the wide eyed innocuous virginal daughter of the village Chieftian - a happy, kind soul - Henna (pronounced as "Heena" in Hindi/Urdu ie. The mehendi applied by the women of the Indian sub-continent, especially on festive and religious occasions, played by the Pakistani actress Zeba Bakhtiar, ex-wife of singer Adnan Sami and daughter of Yahya Bakhtiar, a former Attorney General of Pakistan,) promptly falls in love with our hero. 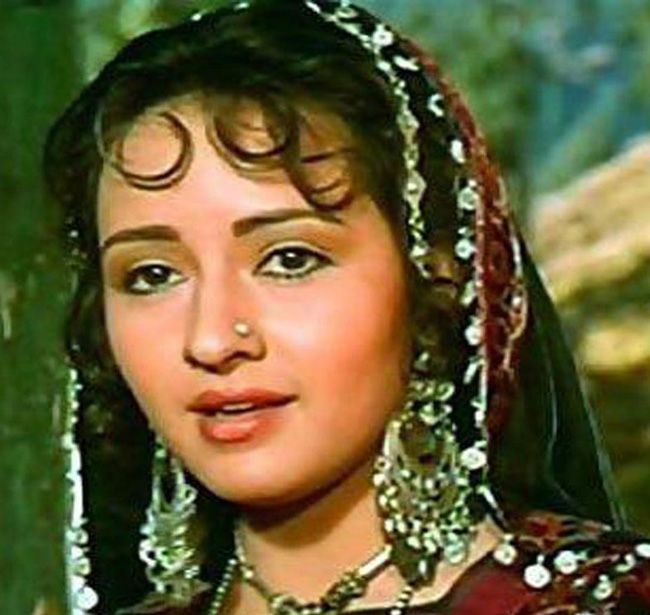 To know what happens hereafter, please discover it yourself by watching the movie. This isn't really a movie review, even though it has tasted like one until this point.

What this article endeavours to point out is – was this film really a trans-border love story that was the last great unfinished dream of the eternal showman Raj Kapoor ?

When Rishi Kapoor's jeep falls into the Jhelum river ( also known as 'Vitasta' in the RigVeda, 'Hydaspes' by the Greeks of 'Alexander the Great' vintage and 'Vyeth' by the Kashmiri Pandits), an illustrative map appears on screen to inform the audience that he has floated away to Pakistan. While the film makers got the map right (at least its de jure position), they got the geography and polity all wrong.

An unconscious Rishi Kapoor, floating over a log on the Jhelum river, could have at best reached that part of Kashmir which is in illegal occupation of Pakistan and is oxymoronically titled as 'Azad Kashmir' by the Pakistanis and appropriately referred to as the PoK ('Pakistan Occupied Kashmir') by India.

Prior to August 1947, British India consisted of Provinces (which were under direct British Rule) and Princely states like Jammu and Kashmir. When the India Independence Act 1947 was passed by the British Parliament, it inter-alia, gave an option to the rulers of the Princely States to merge either with India or Pakistan. By August 1947, Maharaja Hari Singh chose neither and was veering towards maintaining his independence, a luxury that his State's geography could ill afford.

After an impatient wait of a couple of months, for Kashmir to merge with Pakistan (remember what the alphabet 'K' in Pakistan stands for!), Pakistan sought to forcibly solve the conundrum for the Maharaja, by activating 'Operation Gulmarg' and sending Army Regulars disguised as 'Local Tribesmen' armed to the teeth, to capture the princely state, on October 20, 1947.

The Maharaja panicked and sought India's help, which conditioned its help upon the Maharaja signing the 'Instrument of Accession' as provided for in the India Independence Act 1947.

Upon signing of this Instrument on October 26, 1947 the State of Jammu and Kashmir, consisting of Jammu and Kashmir provinces, including Ladakh became an integral and inalienable part of India. There has been no change in this legal position till date.

The Indian Army was airdropped the very next day on October 27, 1947 and heroically recovered lost ground and pushed back the "Tribesmen". However with the intervention of global powers, a Cease Fire was declared and although the Indian Army was able to free most of the important areas and towns from Pakistani clutches, Pakistan continued to latch on to a substantial portion of the erstwhile princely state of Jammu of Kashmir.

China too occupied a part of Aksai Chin of Ladakh on the eastern part of the State of J&K and in 1963 China ceded the Shaksgam Valley, which was a part of Gilgit-Baltistan to China (an area of roughly 5,000 sq kms) enabling China to develop direct road link between two of its largest provinces – Xinjiang and Tibet.

Thus the present unfortunate de facto position is such that almost half of the erstwhile princely state of Jammu and Kashmir is under illegal occupation of Pakistan on the eastern and northern fronts and China on the western front.

Though internal legal and constitutional position of the State of Jammu and Kashmir has undergone some significant changes, especially in 1950 when the Constitution of India came into force, in 1957 when the Constitution of Jammu and Kashmir 1956 came into force and in August 2019 when the Statehood was abolished and it was reorganised into separate Union Territories, the external position of State of J&K has remained consistently unchanged since October 26, 1947. The Instrument of Accession that the Maharaja signed on October 26, 1947 was no different than what was signed by 500+ other princely states. The said Instrument was duly accepted by Lord Louis Mountbatten, the then Governor-General of India (though Independent, India was still a 'Dominion' till January 26, 1950 when its Constitution came into force converting India into an Republic, severing the last legal vestige of the British Raj). The political developments since then, including an ill-advised United Nations attempted intervention, demands for a plebiscite and Pakistan backed jihadi terrorism in the Valley have not lead to any material change in this legal status.

Thus while an idea of an apocryphal Indo-Pak romance may have appeared quite attractive for the Box-Office turnstiles, 'Henna' was deeply flawed as a legal and constitutional proposition.

SUNIL FERNANDES is an Advocate-on-Record, practicing in the Supreme Court of India. Views are Personal

(Tis is the twenty sixth article in the "Law On Reels" Series, which explores legal themes in movies)