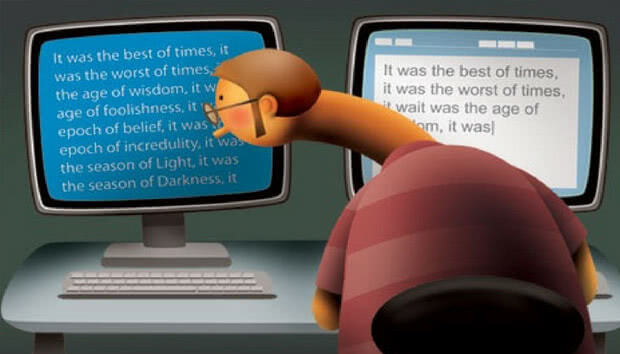 Advent of devices which select text with a simple click and facilitate copying-pasting, has made its presence felt strongly in the legal system: both in the drafting by lawyers and judgments of the courts. This article examines the effect of copying of contents in a judgment without acknowledging its source. Generally, judgments rely on precedents, thereby strengthening the weight...

Advent of devices which select text with a simple click and facilitate copying-pasting, has made its presence felt strongly in the legal system: both in the drafting by lawyers and judgments of the courts. This article examines the effect of copying of contents in a judgment without acknowledging its source.

Generally, judgments rely on precedents, thereby strengthening the weight of reasoning of the decision. It is also not very uncommon to quote well-known works to support the decisions. The difficulty however arises in cases where judges are found to be reproducing the work of an author, or pleadings of a party, or a previous judgment without acknowledging its source.

Recently, a controversy arose in P. Chidambaram's bail matter before the Delhi High Court regarding a portion of the Order allegedly copy-pasted from a previous judgment in the unrelated case of Rohit Tandon. The Court passed a clarificatory order stating that there is no copy-paste as alleged and that the observations in the allegedly copied paragraph are confined to the case of Rohit Tandon.

A few years ago, in the Cipla Ltd. case, another controversy arose from reproduction without acknowledgement. A division bench of the Delhi High Court while rendering its judgment in this patent infringement case quoted 34 paragraphs from an article without acknowledging the source. Subsequently, in a suo-moto proceeding, while deleting the copied paragraphs, the court issued an apology to the authors of the article and stated that the said error crept in because an intern failed to acknowledge the source in a precis.

Similarly, the judgment in the Rafale review case, was criticised for verbatim lifting 17 paragraphs of the government's arguments as the judge's own reasoning.

There are numerous instances where judges freely copy paragraphs from their own prior judgments. Sometimes, this would be done without acknowledging the previous judgment. (See Hira Lal[1] at para 9 quoted verbatim in Kaliaperumal[2] as para 5).

There are also instances where judges quote another judge's words without referring to his judgment. (Ref: See para 48 of Institute of Chartered Accountants of India[3], quoted in Govind Singh[4], para 13 without reference).

The problem arises in cases where a judgment quotes an article or book or other literary work without acknowledgement. Not only does such an act raise moral questions regarding plagiarism and copying, it also raises a question about the rights of the author of such literary work. Being quoted in a judgment in effect takes that portion of the literary work outside the protection of copyright laws to the extent Section 52 provides for.

Generally, judges are fair in acknowledging their sources and do not adopt words from someone else's work and present it as a product of their own analysis and ingenuity. The question as to how a judgment as a piece of writing compares with respect to other types of writing was discussed in the case of Cojocaru v. British Columbia Women's Hospital and Health Centre. In this case, the Supreme Court of Canada was faced with an appeal against a decision ordering a new trial on the ground that the trial judge had extensively copied from the plaintiffs' submissions (Out of 368 paragraphs, 321 paragraphs were copied from the plaintiffs' submissions). The Court examined the criticism against copying on the ground that the reasons should be an "original" product of the judge's mind. Answering the same in the negative, the Court acknowledged that copying is a part of the judicial process. The Court drew a distinction between judicial writing and other kind of writings, stating that "The conventions surrounding many kinds of writing forbid plagiarism and copying without acknowledgement. Term papers, novels, essays, newspaper articles, biographical and historical tomes provide ready examples. In academic and journalistic writing, the writer is faced with the task of presenting original ideas for evaluation by an instructor or by peers, or of engaging in principled debate in the press. The task of judgment writing is much different."

The court went on to note: "As we will see, judicial copying is a long-standing and accepted practice". The said observation stems from the fact that judges tend to support their reasoning by quoting and copying extensively from acknowledged and established sources such as another judgment, writings of well-known authors etc.

In Cojocaru (supra) the Court also examined another issue: "whether a reasonable person would conclude from the copying that the judge did not put her mind to the issues to be decided, resulting in an unfair trial." Answering the same, the Court held that judgments traditionally provide a very narrow range for creativity and are often collaborations of paragraphs borrowed from other judgments, pleadings, arguments, legal treatises etc. which may be often acknowledged and often not acknowledged at all. The Court further held: "It would have been better if the reasons had not copied extensively from the plaintiffs' submissions. However, to set aside the decision of the trial judge requires more. To rebut the presumption of judicial integrity, the defendants must establish that a reasonable person apprised of all the circumstances would conclude that the trial judge failed to consider and deal with the critical issues before him in an independent and impartial fashion. The defendants have not done so."

A similar approach was adopted by the Court of Appeal in University of Alberta v. Chang to set aside the judgment of the trial court and a new trial was ordered on finding that there was no proper analysis or reasoning, no meaningful discussion of conflicting evidence or competing arguments.

Therefore, judgments are to be seen as a distinct class of writing, which is to serve a greater purpose than merely analysis or discussion or research, and the judge is not expected to be original. What needs to be examined is whether such copying has resulted in a judge failing to consider and deal with critical issues before him in an independent and impartial manner.

Though a judgment serves the higher social purpose of settling the rights and obligations between parties quickly and efficiently, it would be in keeping with judicial ethics, propriety and best practices if sources are always acknowledged. When a judgment copies from another source which is protected by copyright, it must be remembered that copyright protects not originality of ideas, but originality of expression.

There is no harm in lifting paragraphs from sources that the judge agrees with as long as the same are acknowledged. In fact, these sources can enrich a judgment and consequently the law on the subject. The action of the Delhi High Court in Cipla case (supra) of striking off the judgment's copied paragraphs was unnecessary and possibly an overreaction, as the oversight could have been easily corrected by acknowledging the source of these paragraphs and letting the same remain a part of the judgment. This is more so, in view of the fact that judges saw it fit to quote the article in their judgment, being in full agreement with the same.

As the jurisprudence in India on this subject is limited and not yet fully developed, it may be concluded on a lyrical note that the cat is out of the bag to catch a copying cat.

This article draws inspiration from the article titled When judges copy by Latha Jishnu.