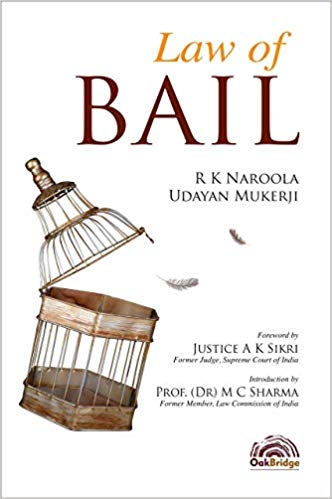 The age-old adage of criminal law jurisprudence, Bail not Jail has been dealt at length by the authors of the book Law of Bail. A nuanced, yet succinct approach makes this book a helpful guide for lawyers, investigators and students alike. I agree with the foreword written by Hon'ble Justice AK Sikri, Former Judge, Supreme Court of India, wherein he says, ".. The beauty of the book...

The age-old adage of criminal law jurisprudence, Bail not Jail has been dealt at length by the authors of the book Law of Bail. A nuanced, yet succinct approach makes this book a helpful guide for lawyers, investigators and students alike. I agree with the foreword written by Hon'ble Justice AK Sikri, Former Judge, Supreme Court of India, wherein he says,

".. The beauty of the book is that it has been made so easy to understand this subject by not only those who are the practitioner or enforcer of the concerned provisions, but also those categories of persons who are supposed to follow these provisions, even if they do not possess any legal background."

Chapter I commences with the views of Hon'ble Justice VR Krishna Iyer (Retd.) a pioneer in propounding the grounds for bail in order to safeguard personal liberty while facing the rigors of a criminal trial. This is followed by a brief history of the evolution of the concept of Bail, from English Law through to the development of bail law in India.

Chapter II explains the provisions of the Code of Criminal Procedure, 1973,( hereinafter referred to as CrPC) pertaining to default bail u/s 167 of CrP.C and discusses the scope of judicial intervention which leads to the accrual of the indefeasible right to default bail after the expiry of the mandatory period for submission of charge sheet. The method to calculate the period of 60-90 days, for filing the charge sheet, has been explained through the case of Ravi Prakash Singh @ Arvind Singh Versus State of Bihar, (2015) 1 MLJ (Crl) 594 (SC).

Chapter III elucidates at length the practice, procedure and precedents pertaining to Bail in case of bailable offences and the pre-requisite conditions for such bail. Can such bail be cancelled? This question has been succinctly answered by placing reliance on the Law Commission Report and a 2014 judgment of the Apex Court. The chapter ends with a discussion on the maximum time frame for which an undertrial can be subjected to incarceration.

Chapter IV has examined at length the discretion of Hon'ble Judges (as delineated by a plethora of cases) while granting bail in case of non-bailable offences, in light of Section 437 of the CrPC. The book provides easy access to recent judgments, including the analysis of Dataram Singh versus State of Uttar Pradesh and Anr. (2018) 3 SCC 22. Various questions faced at the time of conducting a criminal trial are answered in this book, for instance, can successive bail applications be filed before a  judge other than the one who heard and refused the Bail plea in the first instance?

Anticipatory Bail is a vital component of Criminal law. Chapter V discusses the law in the light of Section 438 CrPC as well as 2018 Amendment to CrPC. The crux of this chapter lies in the comparative table differentiating between Section 437 and 438 CrPC. Furthermore, the comparative table of 3 landmark precedents, cited subsequently, ensures substantial conceptual clarity to the readers. Judgments from the 1980s to 2019 make this chapter vital for students and practitioners of law. Cancellation of Bail, a pivotal aspect of criminal proceedings forms Chapter VI.

Chapter VII provides the procedure to be adopted for bail under special laws. The Unlawful Activities (Prevention) Act, 1967 (UAPA), The Prevention of Money Laundering Act, (2002) PMLA, Narcotics Drugs and Psychotropic Substances, Act, 1985, Protection of Children from Sexual Offences Act, 2012 and Juvenile Justice (Care and Protection of Children) Act, 2015 are special legislations and the distinct procedure to be adopted under these legislations has been explained in this Chapter. Tables discussing recent amendments in the PMLA and comparison between the UAPA and TADA are of particular significance.

Granting or denial of bail is only the first aspect of bail proceedings in a trial. Section 440- 450 of CrPC provides for the procedure after granting of bail, in the form of deposit of sureties and bail bonds. This procedure has been fully explained in Chapter VIII of the book.

The book concludes with Chapter IX, in light of the statistics made available by the National Crime Records Bureau, the authors have raised a valid concern regarding the incarceration of young undertrials. Despite having been granted bail a substantial number of undertrials are compelled to languish in jail raising pertinent questions on social justice and access to legal aid.

The Book, Law of Bail is available for purchase on the following link: