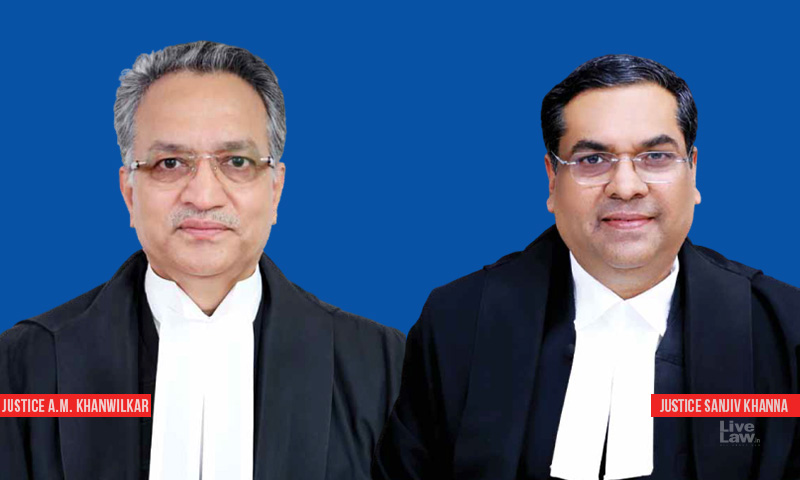 x
Question of intent would be relevant for offences under Section 153A, 295A IPC.

The Supreme Court interpreted the ingredients of the offence under Section 153A of the Indian Penal Code in the case Amish Devgan v Union of India.Interpreting Section 153A(b) of the Indian Penal Code, the Supreme Court has held that the term 'public tranquility' must be read in a restricted sense synonymous with public order and safety and not normal law and order issues that do not endanger...

The Supreme Court interpreted the ingredients of the offence under Section 153A of the Indian Penal Code in the case Amish Devgan v Union of India.

Interpreting Section 153A(b) of the Indian Penal Code, the Supreme Court has held that the term 'public tranquility' must be read in a restricted sense synonymous with public order and safety and not normal law and order issues that do not endanger the public interest at large.

The bench comprising Justices AM Khanwilkar and Sanjiv Khanna observed thus in the judgment dismissing the writ petition filed by Journalist Amish Devgan seeking quashing of FIR lodged against him for his remarks against Sufi Saint Moinnuddin Chisthi.

Section 153A(b) penalizes an act 'which is prejudicial to the maintenance of harmony between different religious, racial, language or regional groups or castes or communities, and which disturbs or is likely to disturb the public tranquillity'. Taking note of the punishment of imprisonment of up to three years prescribed therein, the court observed:

"It cannot be given the widest meaning so as to fall foul of the requirement of reasonableness which is a constitutional mandate. Clause (b) of Section 153A, therefore, has to be read accordingly to satisfy the constitutional mandate. We would interpret the words 'public tranquillity' in clause (b) would mean ordre publique a French term that means absence of insurrection, riot, turbulence or crimes of violence and would also include all acts which will endanger the security of the State, but not acts which disturb only serenity, and are covered by the third and widest circle of law and order(Paragraph 64).

"Public Order in clause (2) to Article 19 nor the statutory provisions make any distinction between the majority and minority groups with reference to the population of the particular area though as we have noted above this may be of some relevance. When we accept the principle of local significance, as a sequitur we must also accept that majority and minority groups could have, in a given case, reference to a local area."

The bench noted the Calcutta High Court view ( in P.K. Chakravarty v. The King ) that the intention as to whether or not the person accused was promoting enmity is to be collected from the internal evidence of the words themselves, but this is not to say that other evidence cannot be looked into. It said:

"Likewise, while examining the question of likelihood to promote ill feelings the facts and circumstances of that time must be taken into account. Something must be known of the kind of people to whom the words are addressed. Words will be generally decisive, especially in those cases where the intention is expressly declared if the words used naturally, clearly or indubitably have such tendency. Then, such intention can be presumed as it is the natural result of the words used. However, the words used and their true meaning are never more than evidence of intention, and it is the real intention of the person charged that is the test. Similarly, the Lahore High Court in Devi Sharan Sharma had observed that intention can be deduced from internal evidence of the words as well as the general policy of the paper in which the concerned article was published, consideration of the person for whom it was written and the state of feeling between the two communities involved. In case the words used in the article are likely to produce hatred, they must be presumed to be intended to have that effect unless the contrary is shown.

The court noted that the Bombay High Court in Gopal Vinayak Godse v. Union of India has observed that the intention to promote enmity or hatred is not a necessary ingredient of the offence and that it is enough to show that the language of the writing is of the nature calculated to promote feelings of enmity or hatred, for a person must be presumed to intend the natural consequences of his act. In this context, the court said:

"The view expressed by the Bombay High Court in Gopal Vinayak Godse lays considerable emphasis on the words itself, but the view expressed in P.K. Chakravarthy and Devki Sharma take a much broader and a wider picture which, in our opinion, would be the right way to examine whether an offence under Section 153A, clauses (a) and (b) had been committed. The ordinary reasonable meaning of the matter complained of may be either the literal meaning of the published matter or what is implied in that matter or what is inferred from it. A particular imputation is capable of being conveyed means and implies it is reasonably so capable and should not be strained, forced or subjected to utterly unreasonable interpretation"(Paragraph 62)

"We would also hold that deliberate and malicious intent is necessary and can be gathered from the words itself satisfying the test of top of Clapham omnibus, the who factor person making the comment, the targeted and non targeted group, the context and occasion factor- the time and circumstances in which the words or speech was made, the state of feeling between the two communities, etc. and the proximate nexus with the protected harm to cumulatively satiate the test of 'hate speech'. Good faith' and 'no legitimate purpose' test would apply, as they are important in considering the intent factor"(Paragrapg 62)

In Para 49 of the judgment, the bench explains the test of top of clapham omnibus as follows:

"The test is, as they say in English Law, – 'the man on the top of a Clapham omnibus'. Therefore, to ensure maximisation of free speech and not create 'free speaker's burden', the assessment should be from the perspective of the top of the reasonable member of the public, excluding and disregarding sensitive, emotional and atypical. It is almost akin or marginally lower than the prudent man's test. The test of reasonableness involves recognition of boundaries within which reasonable responses will fall, and not identification of a finite number of acceptable reasonable responses. Further, this does not mean exclusion of particular circumstances as frequently different persons acting reasonably will respond in different ways in the context and circumstances. This means taking into account peculiarities of the situation and occasion and whether the group is likely to get offended. At the same time, a tolerant society is entitled to expect tolerance as they are bound to extend to others.

The court also briefly explained Section 295 and 505 of the Code as follows:

Section 295A of the Penal Code encapsulates of all three elements, namely, it refers to the content-based element when it refers to words either spoken or written, or by signs or visible representation or otherwise. However, it does not on the basis of content alone makes a person guilty of the offence. The first portion refers to deliberate and malicious intent on the part of the maker to outrage religious feeling of any class of citizens of India. The last portion of Section 295A refers to the harm-based element, that is, insult or attempt to insult religions or religious belief of that class. Similarly, subsection (2) to Section 505 refers to a person making publishing or circulating any statement or report containing rumour or alarming news. Thereafter, it refers to the intent of the person which should be to create or promote and then refers to the harm-based element, that is, likely to create or promote on the ground of religion, race, place of birth, residence, language, cast, etc., feeling of enmity, hatred or ill-will between different religions, racial language, religious groups or castes or communities, etc.

The court noted that clauses (a) and (b) to sub-section (1) to Section 153A of the Penal Code use the words 'promotes' and 'likely' respectively. Similarly, Section 295-A uses the word 'attempts' and sub-section (2) to Section 505 uses the words 'create or promote'. "Word 'likely' as explained above, in our opinion, convey the meaning, that the chance of the event occurring should be real and not fanciful or remote.", the bench observed. It further said:

"In the context of 'hate speech', including the offences related to promoting disharmony or feelings of enmity, hatred or ill-will, and insulting the religion or the religious beliefs, it would certainly require the actual utterance of words or something more than thought which would constitute the content. Without actual utterance etc. it would be mere thought, and thoughts without overt act is not punishable. In the case of 'publication', again a mere thought would not be actionable, albeit whether or not there is an attempt to 'publish' would depend on facts. The impugned act should be more than mere preparation and reasonably proximate to the consummation of the offence, which has been interrupted. The question of intent would be relevant. On the question of the harm's element, same test and principle, as applicable in the case of 'likely' would apply, except for the fact that for intervening reasons or grounds public disorder or violence may not have taken place"(Paragraph 68)

CASE: AMISH DEVGAN vs. UNION OF INDIA [WRIT PETITION (CRIMINAL) NO. 160 OF 2020]
CORAM: Justices AM Khanwilkar and Sanjiv Khanna

Also from the judgment :

Persons Of Influence Have To Be More Responsible In Speech : Supreme Court In Amish Devgan's Case