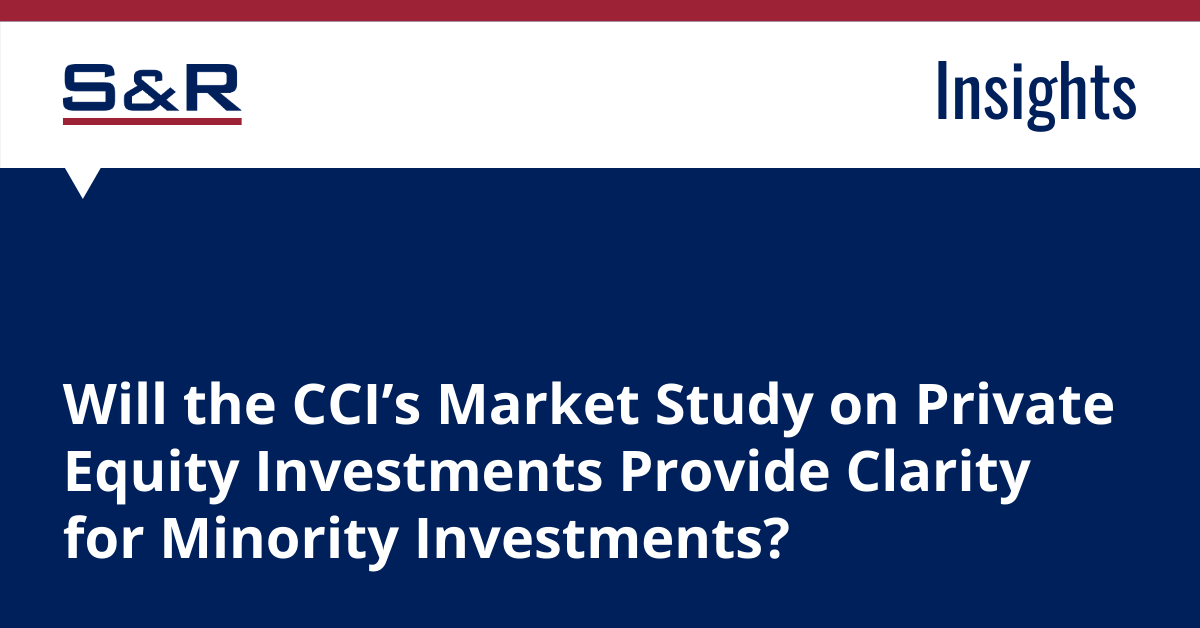 In light of the growing trend of private equity ("PE") firms acquiring minority stakes in multiple firms in the same sector, the Chairperson of the Competition Commission of India (the "CCI") has recently announced that the CCI proposes to conduct a market study to analyse the incentives and rights associated with such minority investments, and its impact on competition in India.

This concern was first highlighted by the CCI in Meru v. Ola/Uber[2] in June 2018, where the CCI examined allegations of anti-competitive conduct against two cab aggregators, Ola and Uber. The CCI noted that common investors held minority shareholdings in both Ola and Uber, and stated that "where common ownership translates into control, there can be potential harm to the competition in concentrated markets". While this matter was closed since the CCI did not find sufficient evidence to order an investigation against the cab aggregators, the CCI indicated that merger control regulation may be better suited for providing efficient oversight of common shareholdings of PE investors.

This article aims to provide an overview of the existing Indian merger control framework vis-à-vis 'minority acquisitions', including the uncertainty currently surrounding the notifiability of such transactions, and suggest a possible way forward.

Schedule I of the Competition Commission of India (Procedure for transaction of business relating to combinations) Regulations, 2011, as amended (the "Combination Regulations") specifies certain categories of transactions that do not 'normally' need to be notified to, and approved by, the CCI prior to completion.

Item 1 of this Schedule exempts all acquisitions of shares or voting rights which:

Further, an Explanation to Item 1 was included on 7 January 2016, to clarify that an acquisition of less than 10% of the shares or voting rights of a company shall be deemed to be 'solely as an investment', provided the acquirer has:

The 25% Exemption and 'strategic' acquisitions

The Combination Regulations do not explicitly state that the 25% Exemption is not applicable to 'strategic' acquisitions (i.e., where the acquirer has an interest in, or controls, an entity that undertakes a business that is similar or related to the target). However, previous orders of the CCI clearly state that transactions that are 'strategic' in nature "cannot be treated as 'solely as an investment'", and accordingly, cannot avail the 25% Exemption.

The 10% Exemption and 'strategic' acquisitions

In this background, it was expected that the introduction of the 10% Exemption (being in the nature of a 'deeming' provision), would provide a 'safe harbour' for acquisitions of less than 10% (without any board or special rights), irrespective of whether such acquisitions were 'strategic' or not. In fact, to read such a requirement into the 10% Exemption (i.e., that it is not available to strategic acquisitions) could be argued to render this exemption without effect, as all acquisitions that qualify for the 10% Exemption would fall under the broader 25% Exemption in any event.

However, certain recent orders passed by the CCI[5] relating to minority acquisitions, where the criteria set out in the 10% Exemption appear to have been met, have created uncertainty in this regard. These orders could be construed to indicate that transactions between companies that are directly (including through group entities) engaged in competing or vertically related businesses are not eligible for the 10% Exemption, even if the transaction relates to an acquisition of less than 10% of the shares or voting rights, without any board or special rights.

Certain other orders of the CCI[6] seem to further exclude the applicability of the 10% Exemption for transactions where the acquirer (although not directly) is engaged in similar or related markets as the target, only through a minority non-controlling investment in a portfolio company. However, given that detailed information regarding the terms of such transactions are not available in the public domain, it is not possible to ascertain the reason for these transactions having been notified to the CCI.

Increasingly, and based on data that indicates that specialization drives higher returns, some PE firms have adopted a sector-focussed approach and may make multiple investments within the same sector.[7] In this backdrop, and based on the limited information disclosed in the CCI orders referred above and in the absence of specific guidance from the CCI, it remains uncertain whether the 10% Exemption would be available to 'strategic' acquisitions.

Recommendations of the CLRC Report

The incongruity in the present 10% Exemption was also considered in the report prepared by the Competition Law Review Committee (the "CLRC Report") in July 2019. This report discussed a proposed re-formulation of Item 1 of Schedule I of the Combination Regulations, which would expressly permit the applicability of the 10% Exemption to transactions where the acquirer has existing overlaps with the target, provided the transaction did not result in the acquisition of any special/board rights.

However, after examining global practices, the CLRC Report preferred a 'substance over form' approach and recommended that a list of indicative factors be included in the Combination Regulations, based on which the 'non-controlling' nature of a transaction may be assessed, and the notifiability of such transaction accordingly determined.[8]

Guidance from the revised 'Notes to Form-I'

Subsequently, in March 2020, the CCI updated the 'Notes to Form-I'[9] to clarify that, for the purposes of assessing overlaps between the parties to a combination, only the following entities are required to be considered by each party:

This could be considered as guidance for assessing whether a transaction is 'strategic', i.e., whether the acquirer is directly, or through a group, affiliate or portfolio company, engaged in businesses that are similar or related to the target. Based on this, acquisitions where the acquirer has an existing interest in a competing business which does not qualify as an 'overlap', could be argued as not being 'strategic' in nature.

This view appears to find some consonance in a recent order of the CCI dated 30 April 2020[10], where the CCI approved the acquisition of an additional 3% shareholding (along with certain board, veto and information rights) by a PE investor (ChrysCapital, through its affiliates) in a pharmaceutical company (Intas), subject to the PE investor voluntarily undertaking to significantly reduce its participation in the management of its portfolio company (Mankind, also a pharmaceutical company) in which ChrysCapital held a shareholding of less than 10% by, inter alia, removing its nominee director from Mankind's board of directors.

Based on the above, it is seen that while the treatment of 'minority acquisitions' under the Indian merger control framework is clouded with ambiguities, the recently revised 'Notes to Form-I' could provide some guidance for assessing whether a PE investor is required to notify a proposed minority acquisition to the CCI.

It is hoped that the CCI's proposed market study will inform further improvements to this framework by including objective standards and tests, accompanied by clear and unambiguous guidance, since subjective standards (such as concepts like "material influence"[11]) will only serve to erode certainty and investor confidence.

In addition, the CCI should consider providing more detailed disclosures of the ownership, control and overlap aspects of notified combinations in its orders (subject to reasonable confidentiality requests) as this would be instructive for stakeholders in assessing their notification requirements, and add much needed clarity to the Indian merger control regime.

This insight has been authored by Dhruv Agarwal (Associate) and Samali Verma (Associate). They can be reached at dagarwal@snrlaw.in and sverma@snrlaw.in for any questions. This insight is intended only as a general discussion of issues and is not intended for any solicitation of work. It should not be regarded as legal advice and no legal or business decision should be based on its content.

[1] See, the CCI Chairperson's speech at the CII Annual Conference (Virtual) on Competition Law and Practice on 4 December 2020; as available at: https://www.cci.gov.in/sites/default/files/speeches/ChairpersonAddress_0.pdf?download=1

[9] See, item 6.6 of the revised Notes to Form-I; as available at: https://www.cci.gov.in/sites/default/files/page_document/Form1.pdf

[11] As is currently proposed in the draft Competition (Amendment) Bill, 2020 (see, Explanation (a) to Section 5 of the draft bill)