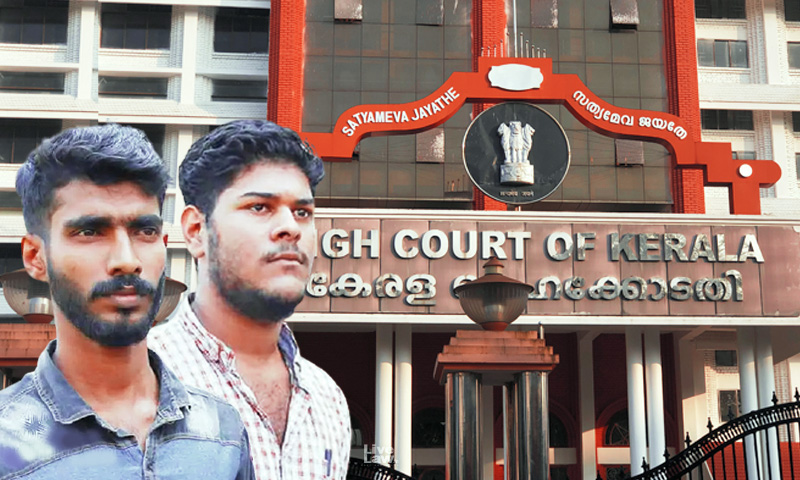 x
An astonishing feature of the High Court judgment is that it does not discuss or deal with the legal analysis undertaken by the Special Court.

"A provocative thought does not ipso facto prove preparation for crime"

"The strategy to fight against terrorism is to dissuade disaffected groups from embracing terrorism."

It is only occasionally that one will find such profound observations in a court judgment. Notably, these judicious remarks are not from a judgment of a constitutional court. These observations were made by the Special NIA Court at Kochi while granting bail to students Allan Shuhaib and Thwaha Fasal in a UAPA case registered over alleged Maoist links.

The Special Court's order reflected good analysis and regard for personal liberty, which is quite rare in cases under the stringent anti-terror law UAPA. More significantly, the order had a humanistic touch and a sense of reality, as the Special NIA Judge was able to understand Allan and Thwaha as two sensitive young men(aged 19 and 23 years respectively at the time of arrest) who may have flirted with extremist ideas out of their disenchantment at the failure of the existing system to remedy social injustices.

Unfortunately, the good work of the Special Court in upholding personal liberties has been undone by the Kerala High Court in an appeal by the NIA. On January 4, a division bench of Justices A Hariprasad and K Haripal overruled the findings of the Special Court regarding lack of prima facie case against the accused. While the High Court cancelled the bail to Thwaha Fasal and asked him to surrender immediately, it allowed Allan to continue on bail considering his relative young age, psychological condition and different degree of involvement in the case.

The Special Court's bail order was not based on sentimental grounds but was founded on sound legal reasoning. A notable point in the order is that it gave effect to the phrase "further the activities" in Sections 38/39 UAPA. It may be noted that in the chargesheet, the NIA had dropped Section 20 of the UAPA – meaning that it had no case that the accused were members of the Maoist outfit. Instead, the NIA built the case on the basis of Sections 38 and 39 which relate to association with a terrorist organization and supporting it with the intention to further its activities.

In this case, the Special NIA Judge, quite remarkably, gave effect to the phrase 'further its activities' in Sections 38/39. Usually, the Courts ignore this limb of the Sec 38/39, and uncritically accept the theories of the prosecution, which very often conflate fierce criticism of the establishment with terrorism. (For eg : Zafoora Sargar, Devangana Kalita, Umar Khalid cases).

To attract this phrase "further the activities" in Sections 38/39, a mere ideological leaning or passive membership in the banned outfit is not sufficient but there should be at least prima facie evidence to show some overt acts or instigation of violence, the Special Court held.

"...the word activity appearing in the second limb of Sections 38 and 39 is to be understood as only those activities that have the intent of encouraging or furthering or promoting or facilitating the commission of terrorist actvities", the Court said. The order also took care not to use the term "terrorist activities" in a loose sense but as per the statutory meaning given to it by Section 15 of the UAPA which includes overt acts of dastardly and wanton violence.

And these conclusions of the judge had support of precedents. In this regard, the NIA judge drew support from the Supreme Court judgment in the PUCL case which interpreted the exactly same provisions in the now repealed POTA(Peope's Union of Civil Liberties v Union of India, (2004) 9 SCC 580).

The order also drew upon the well-settled distinction laid down between passive allegiance and active participation in banned organization. Mere passive membership of a banned organisation will not make a person a criminal unless he resorts to violence or incites people to violence or creates public disorder by violence or incitement to violence, the Supreme Court held in a plethora of cases(See Arup Bhuyan, Indira Das, Raneef decisions). In this regard, the Special court particularly noted that the NIA has no case that the accused are members of the Maoist group and that the agency was aiming to show a long drawn nexus with the banned outfit through indirect evidence.

The Court did not disagree with the NIA case that the accused had Maoist leanings. But that alone will not attract offences under Sections38/39 as the NIA could not prima facie show that the the affiliation and support rendered by the accused to the banned organization were done with "intent to encourage, further, promote or facilitate the commission of terrorist activities."

Also, the order had a touch of empathy and human understanding, as the Court indicated that UAPA was a harsh and disproportionate reaction to two young idealistic minds experimenting with extremist revolutionary thoughts out of their anguish at various societal oppressions.

An astonishing feature of the High Court judgment is that it does not discuss or deal with the legal analysis undertaken by the Special Court. There is absolutely no mention in the High Court judgment about the Special Court's interpretation given to "further the activities" in Sections 38/39, which is in turn based on Supreme Court precedents. The High Court has not taken note of precedents which state that mere possession of books or sloganeering or attending of meetings cannot be construed as terrorist activity if there are no overt acts of violence or incitement.

The entire fulcrum of the High Court judgment is Section 43D(5) of UAPA, which imposes a higher threshold for grant of bail. True, there is an embargo under Section 43D(5) of UAPA in granting bail if there is a prima facie case. However, the Court cannot evade its function to protect the fundamental right to personal liberty by simply citing Section 43D(5). The Section says that should be 'reasonable grounds' for 'believing' that the accusation against such person is 'prima facie true'. Therefore, the Court has to judiciously establish with 'reasons' how the prima facie case is made out.

Even the recent Supreme Court judgment in the case NIA v Zafoor Ahmad Shah Watali, which was repeatedly quoted by the High Court, said that "it is the duty of the Court to be satisfied that there are reasonable grounds for believing that the accusation against the accused is prima facie true or otherwise".

The Special Court's attempt to do so was lambasted by the High Court by saying that the former undertook a 'threadbare' analysis as if it was a trial.

The High Court, "after rushing through the materials", held the documents and literature seized from the accused to be "highly inflammable or volatile". Perhaps they are. Even the Special Court finds that the materials are about the Maoist group, carrying their ideas. The results of the Special Court's so-called "threadbare" analysis and the High Court's rushed reading are not substantially different regarding the nature of materials seized, except that the High Court has used stronger words to describe them. In this connection, it is profitable to refer to one paragraph from the Special Court judgment.

"The materials on record prima facie prove that both accused had associated with, and rendered supported to the banned CPI (Maoist) organisation. Now the question is that the affiliation the accused had with the banned organisation, and the support they rendered, were with the purpose and intend to encourage, further, promote or facilitate the commission of terrorist activities. In other words whether they resort to violence or incise people to violence or does an act intended to create a disorder or disturbance of public peace by resort to violence"(Para 56)

The High Court also observed that the Special Judge was under the wrong notion that the principle 'bail is the rule, jail is the exception' is applicable in UAPA cases("We do not approve the approach made by the learned Special Judge. He is of the firm view, basing on the authorities, that bail is therule and jail, exception"). To say that the rule "bail is the exception, jail is the rule" is not applicable when offences under Chapter IV and VI of the UAPA are alleged, the High Court referred to two judgments dealing with NDPS offences - Narcotic Control Bureau v. Kishan Laland others [AIR 1991 SC 558] and Union of India v. Ikram Khan andothers [(2000) 9 SCC 221. But the principle cited by the High Court is not stated in these precedents. These precedents stated that grant of bail was subject to limitations under Section 37 of NDPS Act. It is difficult to fathom how these precedents fit in this case. Be that as it may, Section 43D(5) does not bar grant of bail but only creates additional restrictions for it. Section 43D(5) also does not oust the application of Article 21 of the Constitution. The HC failed to appreciate that the Special Court's endevour was to examine if there was 'prima facie' case so as to attract the rigour of Section 43D(5).

There are also certain bizarre observations in the judgment such as :

"True, the prosecution could not prove that the respondents are members of an unlawful organisation. But these are surreptitious activities for which evidence may not be readily available, in black and white. Everything is done under the carpet,behind the curtain, without leaving any footprint. Matters have to be inferred from the circumstance".

The HC also surmises that the accused were not carrying mobile phones probably at the "diktat" of their parent organization to avoid phone surveillance.

Thwaha Fasal was directed to surrender immediately. He did it yesterday before Kochi NIA Court.

From the tone and tenor of the HC judgment, it appears that the radical and provocative ideas of the accused swayed the mood of the division bench against them. The bench makes special emphasis on the allegation that Thwafa Fasal uttered pro-Maoist slogans when he was arrested- which was termed 'blameworthy'- even though there is a Supreme Court precedent stating that mere utterance of slogans cannot be regarded as incitement of violence.

In fact, there is a pronouncement of a coordinate bench of the High Court which observed that "merely on a suspicion that a person has embraced the Maoist ideology, he cannot be persecuted by the State authorities"(State of Kerala and others v Shyam Balakrishnan).

The High Court, in its single minded devotion to Section 43D(5) of UAPA, acted in ignorance of several binding precedents. More unfortunately, the High Court omitted to consider the aspect of fundamental right to personal liberty under Article 21.

The High Court's judgment also ends on an unsavoury note by rebuking the Special Court for for using names of judges who authored the precedents cited. The High Court chastised that the Special Court was acting as if it was a "court of record". This uncharitable observation seemed like a disturbing warning to the subordinate court that it should not venture to protect fundamental right to personal liberty acting like a 'court of record' when a constitutional court is not intending to do so.